Morrisville, NC – Tuesday, November 5, 2019 is Election Day in Morrisville and six candidates for the election met this past weekend, taking questions on transportation, public safety and how to build up Morrisville as a destination rather than a crossroads.

You can find our candidate questionnaires online.

Throughout the forum, questions about transportation and roads in Morrisville came up, most explicitly when the moderator with WakeUP Wake County asked about their take on the Morrisville Transportation Plan and what their plan would include.

Richardson said the plan has many important road projects for Morrisville but these have not happened yet, emphasizing the need to speed up these projects.

“We need to leverage our relationship with the state to expedite these plans,” Richardson said.

Fender talked about the importance of two projects in particular to aid traffic all over town: widening Highway 54 and extending Airport Boulevard.

“We need to fund that widening and Morrisville needs to contribute,” Fender said.

With road expansions, Joseph suggested Morrisville has not adequately planned for the future with its road projects.

“If we’re expanding roads, we need to think about the next five years and beyond,” Joseph said, adding that there are too many intersections in Morrisville with no right-hand turns.

On transportation, Schlink said he started on Morrisville’s transportation board and highlighted the importance of resident input on future plans.

Robotti said she wanted to think “outside the box” when it comes to Morrisville transportation, with more bike lanes and sidewalks to make it easier to move around Morrisville without a car.

“People could walk to town centers now but they don’t because they’d be taking their life in their own hands,” Robotti said.

Johnson said she voted for Morrisville’s transportation plan and thanked residents for their input but also said paving and building more roads is not the only solution.

“We can’t pave our way out of problems,” Johnson said. “Commuter rail is one option.”

Talks about transportation and roads also came up in a question about public safety around Morrisville, particularly around emergency services and response times.

“If you talk about response times, you have to talk about roads,” Robotti said. In her response on public safety, Robotti also said Morrisville police need to be trained in deescalation and how to interact with marginalized communities.

On the topic of response times, Schlink said he “spearheaded” the project to improve Morrisville’s 911 call center and response times earlier this year.

Johnson also talked about her work on response times for the Fire Department and said making roads more walkable will also aide public safety. She also pointed to Morrisville’s “Night Out” program as a positive step in letting police and communities know each other better.

Fender said the intersection of Davis Drive and McCrimmon Parkway sees a large number of accidents and this is a crucial area for public safety.

“We need to push forward the project to address this area,” Fender said.

The intersection of Davis Drive and McCrimmon Parkway

Joseph said, when it comes to public safety, creating a stronger community will be more helpful than only hiring more police.

“We need to build a place for people to live and stay here, not just come for two years for a job,” Joseph said.

Richardson said public safety is why people move to a small town such as Morrisville but said recently the town’s Indian community expressed concern they are being targeted for break-ins.

“We need to make sure people feel safe,” Richardson said.

“We can not cut roads through environmentally-sensitive areas, like our wetlands,” Richardson said.

In addition to her comments on public transportation, Fender said she is endorsed by the Sierra Club and said the town’s ordinances are less restrictive when it comes to developers and the environment compared to surrounding municipalities.

“Seeing the clear-cutting of trees on McCrimmon is what made me want to run,” Fender said.

On the topic of climate change, Joseph also talked about his love of trees, comparing Morrisville to the sparse settings out West where he moved from.

“Now it pains me to see trees getting cut down,” Joseph said. “We need to encourage developers not to cut down trees when they don’t have to.”

Schlink is the only other Morrisville candidate this year endorsed by the Sierra Club and he said the town not only needs more open space and green space but also better greenway connectivity.

“We need to get people out of their cars,” Schlink said.

Robotti talked about the need for trees, saying indigenous trees specifically, but also talked about growing solar power across Morrisville throughout the debate.

“We need to make solar panels easier for residents to get,” Robotti said. “We can also look for bold options, like creating solar farms on our parking lots.”

Johnson said Morrisville can help with climate change by setting an example with low-impact development, including rain and water-conscious parks and playgrounds. 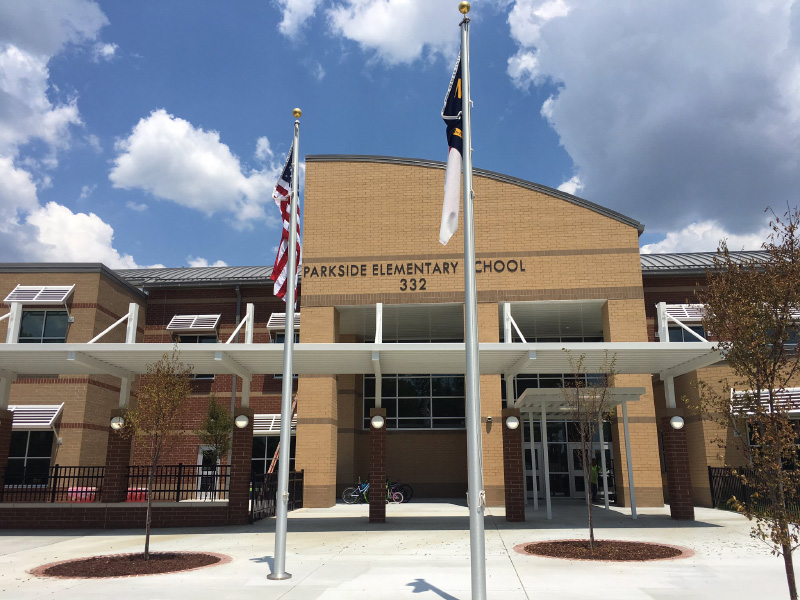 Another common subject at the forum was how to make Morrisville a destination, rather than a town that people drive through. Johnson said the new Town Center will help Morrisville establish a downtown and she’s glad to hear support for the plan.

“I have worked on the Town Center for a long time,” Johnson said.

Joseph also said creating the Town Center is an important step because to create a community, a downtown is necessary.

“We’re the Heart of the Triangle, but you don’t hear people talking about Morrisville like that,” Joseph said.

Richardson said both the Town Center and partnering with local businesses to create a space where people come to spend time and money will be important to turning Morrisville into a destination.

“We have to create a unique town identity,” Richardson said.

Fender talked about specific amenities to add to Morrisville, including building up town parks and adding a community theater to the new library.

“We can make it a destination for people outside of Morrisville,” Fender said.

Robotti said it will take years for the Town Center to be built and, in the meantime, there are already many unique businesses around town.

“We want ways to build up Shop Local advertising,” Robotti said. “We can also have tours of our parks and greenways.”

Schlink said much of this talk is, in a way, putting the cart before the horse and said the idea that “if you build it, people will come” has not always proven itself.

“We have to develop a community first,” Schlink said. “We need to make Morrisville family friendly, but we need to have schools in town.”

Candidates were also asked how to manage urban sprawl in Morrisville when thinking about what kind of community this should be. Fender said Morrisville is “playing catch-up” on roads because of how many people travel through the town, but is already managing density, citing statistics that 37 percent of homes in Morrisville are single family detached, while it’s closer to 60 percent in surrounding municipalities.

“We have more than our fair share of apartments and townhomes,” Fender said.

Richardson said she is optimistic about Morrisville’s future and building schools here will keep the growth manageable.

“By having schools nearby, we’ll be able to foster community spirit,” Richardson said.

Joseph said with so many people coming to Wake County, growth can’t be stopped or avoided and council should instead focus on what to do about it.

“Growth is here, it’s not going away, so we have to plan for the future,” Joseph said.

Schlink said growth has resulted in strains on infrastructure but said the state Department of Transportation has started giving Morrisville more funding for road projects, but he also pointed to the positive elements of growth.

“We’re lucky that we have growth rather than places like Detroit that see it leaving,” Schlink said.

Robotti said more schools would help reduce sprawl and pointed to Parkside Elementary as a recent success, but said past emphasis on charter schools has hurt Morrisville’s efforts to get more.

“Too much was put into charter schools and it affected our relationship with the Wake County Public School System,” Robotti said.

Johnson said managing growth is a a difficult process and these conversations should have started in the mid-1990s, but for now, Morrisville needs to find ways to pay for how many people use its infrastructure.

“Our roads are adequate for Morrisville but they are not adequate for the commuters we have coming through,” Johnson said. “Citizens should not bear the burden of that alone.”

The video of the full candidate forum is available online. Early voting in the Morrisville election starts Wednesday, October 16, 2019 and Election Day is Tuesday, November 5, 2019.