Cary, NC – The latest Cary Town Council meeting was packed with big items, including a vote on the Koka Booth Amphitheatre budget, changes to GoCary bus service, a Public Hearing on a new Twyla Road project, a vote on SearStone II and more.

The Thursday, October 24, 2019 Cary Town Council meeting saw the first Public Hearing on the south part of Twyla Road, after passing a rezoning for the north piece at a meeting last month. This is an amendment to the existing zoning, including a Planned Development District that maps out where the different uses and buildings will be located. The site in question, 20.03 acres inside of a designated Commercial Center at the corner of Twyla Road and Morrisville Parkway, would have a maximum of 199 residential units, with a maximum of 104 multifamily units and 95 townhomes. The one commercial building has conditions limiting its uses, restricted to:

There were several speakers at this Public Hearing, most of whom were property owners on this land. Because of the adjacent 540 highway, they said they were interested in selling their land and wanted the rezoning amendment to go forward so they could complete that sale. Speakers included the family of this farm land’s original owners.

Only one speaker, a nearby neighbor, was opposed to the plan. He said this region has already seen a lot of development and it would get rid of the remaining wildlife here. 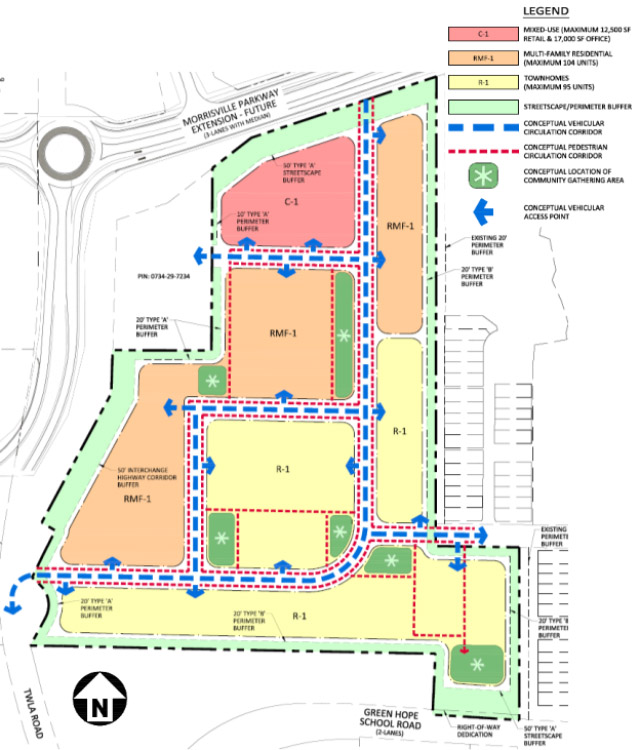 The PDD for Twyla South. C-1 is commercial, RMF-1 is multi-family and R-1 is townhomes

Town Council were not receptive to that speaker’s argument but there were many reservations for other reasons. Mayor Pro Tem Lori Bush said that, despite this being in a Commercial Center, this amendment would make it 90 percent residential. Similarly, because the Planned Development District includes no phasing, Council Member Ken George said he was concerned that commercial use may never come in.

Twyla North was similarly meant for commercial use and Town Council approved a rezoning to make it largely residential, but several Council Members said that was because of its topographical limitations, and they questioned if the same was the case here.

“The only reason I voted for Twyla North was because I was convinced the topography wouldn’t allow for commercial,” said Council Member At-Large Ed Yerha. “For Twyla South, I need to be further convinced.”

The other Public Hearing that had the most comments ended up not being a Public Hearing at all. A proposal for a PDD along Davis Drive in West Cary with a mix of residential, office and commercial space was pulled from the agenda at the request of the applicant at the start of the meeting, with the item tabled indefinitely.

The plan, with 21.01 acres at the intersection of Davis Drive and Airport Boulevard would rezone land designated as Office/Research and Development to a mix of: 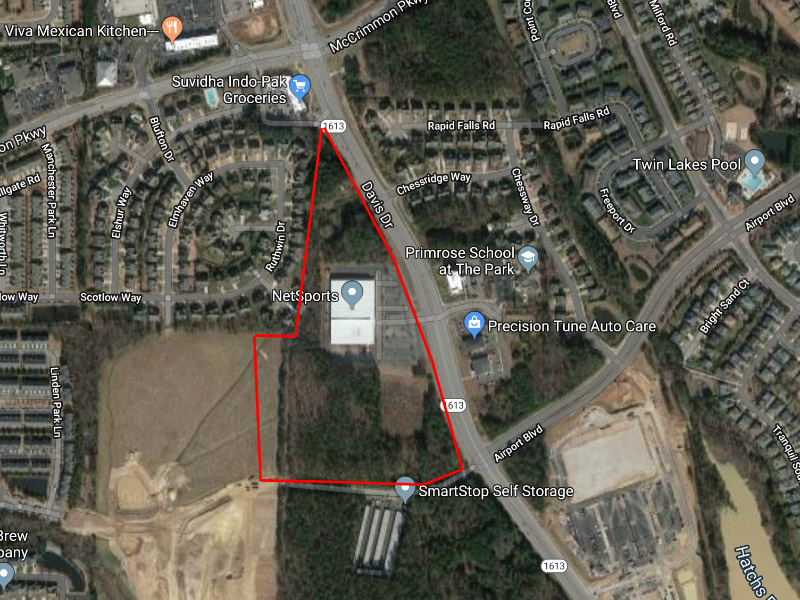 Because this item was no longer on the agenda, speakers who were planning to come to the Public Hearing spoke at Public Speaks Out instead. There were four speakers, all of whom were opposed. Reasons were primarily traffic, density, noise and light pollution as well as stormwater. Also, multiple speakers said they felt underserved in this part of Cary and not treated fairly.

One speaker also said he was frustrated that he took time off work to come to the Public Hearing only to find out it had been canceled and Council Member Jennifer Robinson agreed that there needs to be better communication to residents who have expressed interest in a particular hearing if an item may be pulled.

The final Public Hearing was a proposal for several changes to Cary’s land development ordinances. One of the biggest is the removal of density limits in Downtown Cary. Instead, the ordinance would regulate use based on height, parking and other related factors.

There are also changes to how height is measured in buildings. Now, height would be measured from the base of the roof line instead of the top of a roof’s parapet. Additionally, the new ordinance would allow for administrative modification on building height, up to 15 percent, but only if a building is mixed use, located in a town or destination center and has had its development approved by Town Council.

New ordinance changes also would allow for more distinct building types, with metal and fiber cement panels now allowed. Additionally, ordinances would take an entire building into account instead of looking for visual symmetry in each segment. Debra Grannan with Cary’s planning department said this will allow for asymmetry in Cary buildings, creating “visual interest.”

The final ordinance change is that Quasi-Judicial Hearings would no longer be required if they are already the subject of a council-approved development agreement.

There were no speakers on the Public Hearing so the proposed changes went to the Planning and Zoning Board for their recommendation.

While SearStone’s amendment to Phase II had seen a lot of comment, both from Town Council and public speakers, at previous meetings, the proposal went forward with very little discussion here.

The amendment changes Phase II’s previous plan for four new buildings, including a conservatory, to instead make space for three community gathering spaces and one large building with units for residents to live in, as well as an auditorium, café and dining room.

Some changes to this proposal since its last Public Hearing include more detail to its community gathering spaces and all landscaped areas are now irrigated. The Planning and Zoning Board voted unanimously that this is consistent with the Cary Community Plan and Board Chair Ryan Eades said the board agreed the green open space has more benefit than the conservatory.

With no discussion from Town Council, the amended PDD pass unanimously.

Town Council also voted on a variety of changes to the GoCary bus system, including the addition of a new route, new CPX connections and a Holly Springs express line, all of which is budget neutral.

There was one speaker on this topic during Public Speaks Out: Joe Milazzo, executive director of the Regional Transportation Alliance. Milazzo talked about the importance of public transportation and urged support for the new expanded map. 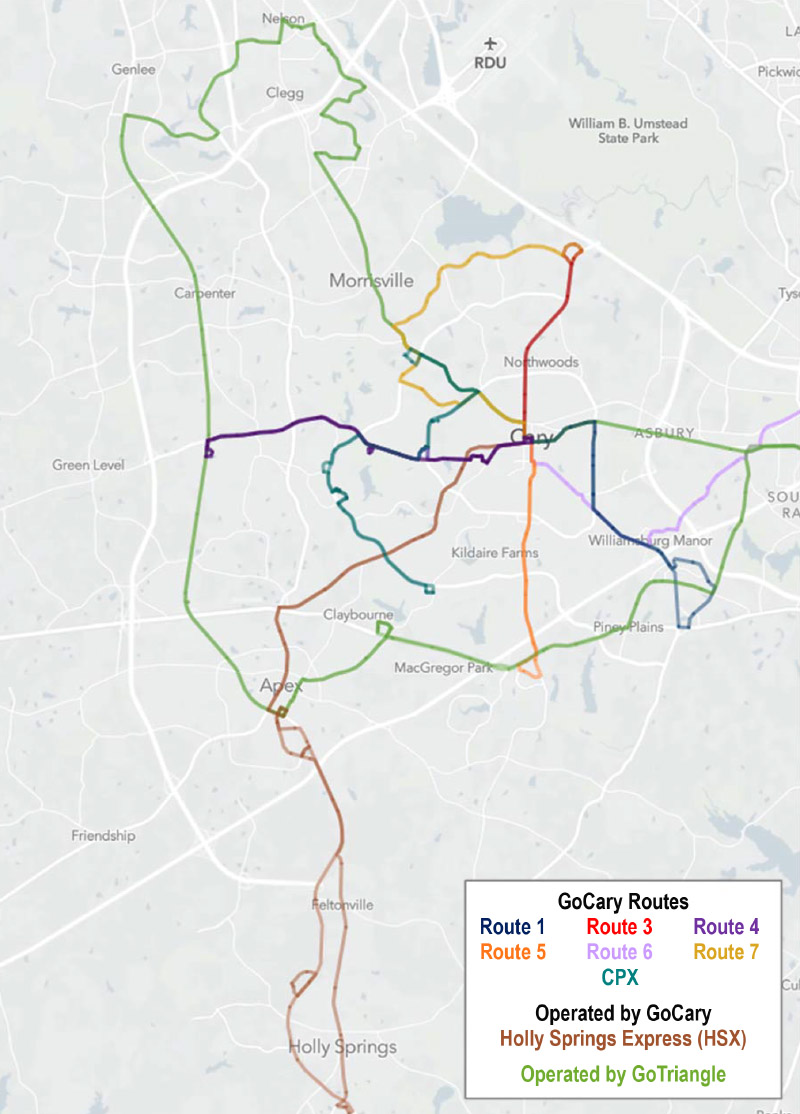 At the last meeting on this topic, there were several speakers who were opposed, primarily elderly and disabled residents who said the new map had routes that take away from accessible sites and retirement communities. Since then, the map has changed and reaches 19 of Cary’s 23 senior housing and affordable housing communities, while also working with NC DOT to get better paved routes for people with wheelchairs or otherwise impaired transportation to reach bus stops.

Town Council repeatedly thanked staff for making these changes to address concerns, with Council Member Jack Smith getting choked up as he said this shows that Cary’s staff listens and is receptive.

“As a kid, I was always told ‘You can’t fight City Hall,'” said Council Member Ken George. “In Cary, we’re showing that you don’t have to fight City Hall.”

The new GoCary map was passed by Town Council unanimously.

The only other item on the agenda was Koka Booth Amphitheatre’s management plan and budget. For the third year, the venue has run a budget surplus, with $135,000 in this latest season. Attendance increased 21 percent from the 2018 season, including a 104 percent increase in “national concert” attendance and a 229 percent increase in rental event attendance.

William Lewis, Cary’s new cultural arts manager, said part of this increase in attendance and the quality of concert acts is the new open promoter model, first used this year. Also, there were no weather cancellations this year, as there were in 2018, which prevented the venue from running a surplus that time.

The existing amphitheare budget was $559,473 but Lewis asked for an increase to $940,456, out of the town’s mid-year general fund. This would also go to repairs and improvements around the venue, as it is nearly 20 years old and is currently being assessed for repairs.

Council Member Don Frantz, as he has done for nearly every previous discussion on Koka Booth Amphitheatre’s budget, asked about the possibility of video screens so people farther from stage could see the acts better. Lewis said he would look into this but many national acts do not allow these screens as they make it easier for audiences to film their set.

Aside from residents talking about other agenda items, there were only two other speakers at Public Speaks Out. One of whom talked about the recent purchase of Chatham Plaza by Chatham Street Commercial and said he was concerned about the rising rents there that may displace the long-time businesses, with the La Nueva Mexicana already announcing it will be closing due to rents. The speaker said these businesses offer important cultural richness and community to Cary and urged Council to work with the owners to make sure these businesses can stay.

The other speaker talked about traffic concerns in Downtown Cry and asked if there was a possibility to make some roads one-way, or make them one-way at peak times.

Story by Michael Papich. Photos courtesy of the Town of Cary, Google Maps and Hal Goodtree.