Cary, NC – Last year, the North Carolina Courage became the first team to win both the NWSL Shield and the NWSL Championship season. Now, after a win at home over the Chicago Red Stars, they have done it twice.

The North Carolina Courage competed for the NWSL Championship at Sahlen’s Stadium at WakeMed Soccer Park on Sunday, October 27, 2019. With 10,227 people in attendance, this was the largest crowd for any soccer match here, for either North Carolina FC or the Courage.

The Courage took on the Chicago Red Stars, who were playing in their first ever playoff finals. We can’t know how optimistic the Red Stars were going in but life came at them fast as Debinha scored a goal in the fourth minute – the fastest ever goal in a NWSL Championship match. Debinha got a cross from Jessica McDonald and made three consecutive shots at the goal, breaking down the defenses with the third kick and giving the home team the early lead.

Lynn Williams followed up with aggressive play, including a narrow goal attempt off of a header. But in the 26th minute, Williams got a pass to McDonald, who this time got a header of her own and got the goal in the bottom corner, giving the Courage a 2-0 lead.

Just before the whistle for halftime, Crystal Dunn showed off her tenacity. She was boxed in by Chicago’s defenders but she made a desperation kick toward the net. It sailed into the net and Dunn ended the season with her ninth successful goal.

But the team was not done there. In the 61st minute, Abby Dahlkemper passed the ball to Samantha Mewis. Mewis got Chicago goalkeeper Alyssa Naeher to come out of the net, only for Mewis to hit a header and get it behind Naeher. The ball rolled in and the Courage ended their championship match with a 4-0 score, becoming the first ever team to win the NWSL Championship on their home field.

This game was also Heather O’Reilly’s final professional match, retiring at the conclusion of the game. O’Reilly played for the Olympic Gold Medal winning women’s soccer team in 2004, 2008 and 2012, as well as the FIFA Women’s World Cup winning team in 2015. O’Reilly joined the Courage in 2018. 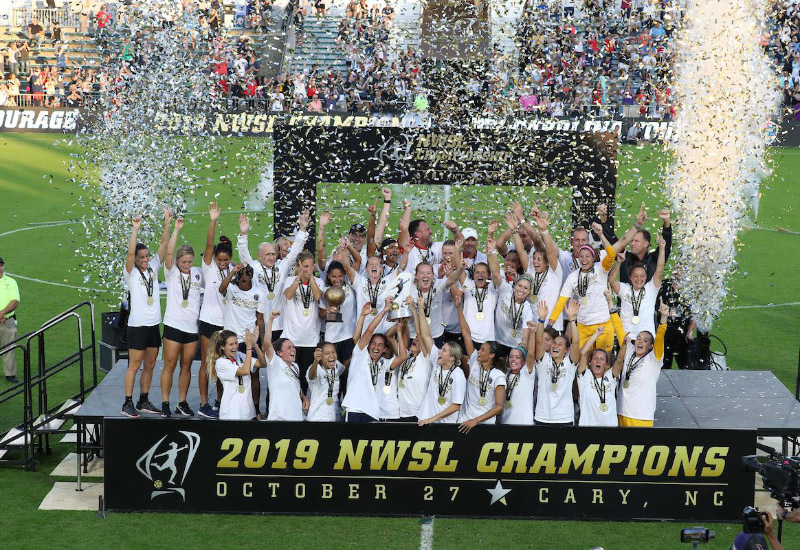 With their championship win, the Courage have set a number of historic landmarks in the league.

Additionally, the Courage also won the inaugural International Champions Cup Women’s Tournament. And this year, the Courage did not lose a single game at home.

Next season will see the addition of at least one new NWSL team, with three new teams total to be added by 2021.

There is no set schedule yet for the 2020 NWSL season.