Cary, NC – At the Cary Chamber of Commerce’s annual economic update on Wednesday, October 30,  Economist Ted Abernathy stated thatCary’s economy is still progressing well despite news that jobs that drive an economy are fading in Wake County and around the state. 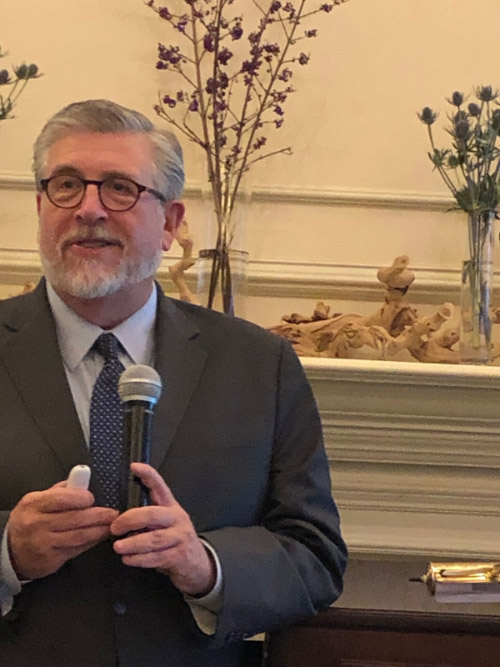 Abernathy, managing partner of consulting firm Economic Leadership LLC, has given these talks on the local economy to the Cary Chamber of Commerce for nearly 12 years. And like most of Abernathy’s previous talks in town, he had good news for Cary.

There are just over 96,000 employed people in Cary, with a 3.2 percent job growth rate over the past year. Unemployment in Cary is at 3.3 percent, compared to 3.7 percent in Wake County. The number of new residential permits continues to go up, with the average home value at around $350,000. While Cary had the fastest rate of new residential permits, Abernathy said that has changed in recent years. 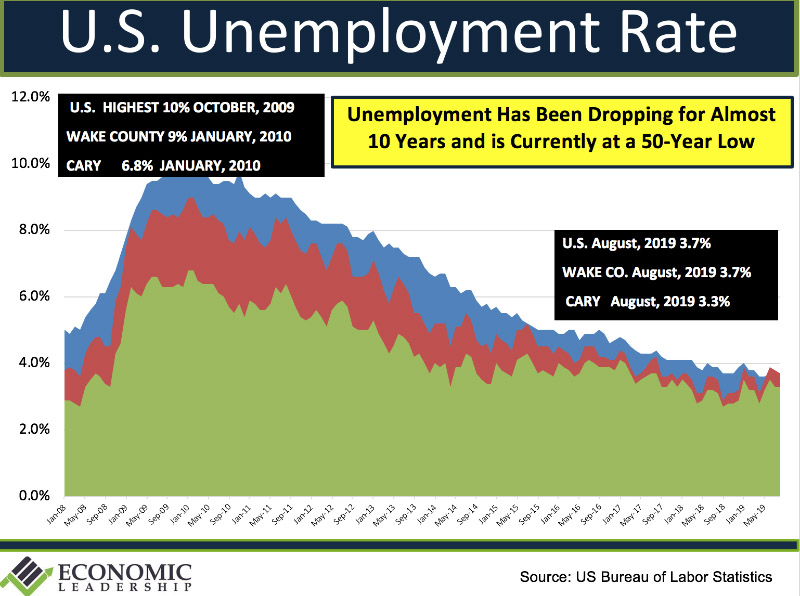 The percentage of residential tax base value went up over the past year and Abernathy said if Cary wants to reach the 30 percent commercial tax base, there will need to be more commercial development in the coming years to lessen that tax burden on residential buildings. Additionally, while multi-family residential units have grown by 50 percent across Wake County in recent years, Abernathy said Cary has not seen nearly as much of this. 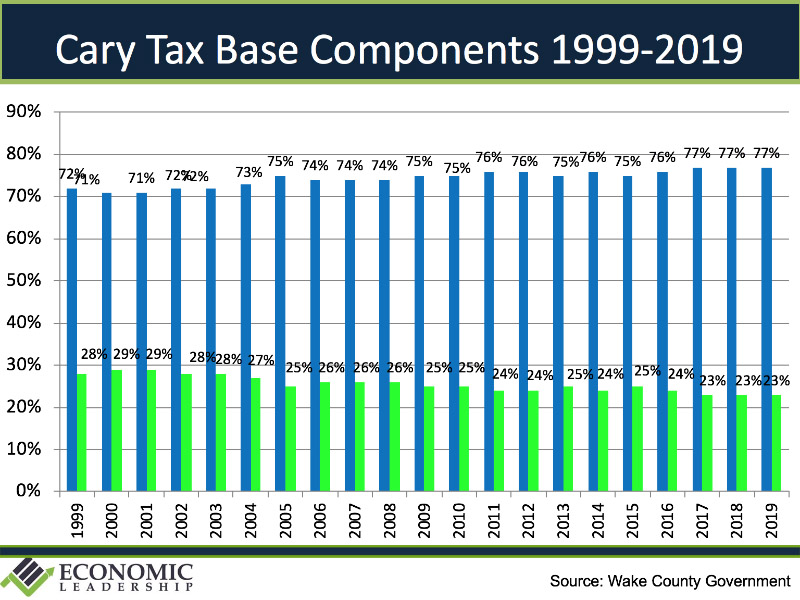 More broadly, Wake County and the Raleigh-Cary metropolitan area have also been performing well. Raleigh has a higher rate of job growth than Charlotte and while manufacturing has fallen across the state, manufacturing jobs have grown 8.7 percent over the past five years in this metro area.

“Raleigh has seen much of its job growth in professional and business sectors, namely, consultants,” Abernathy said. 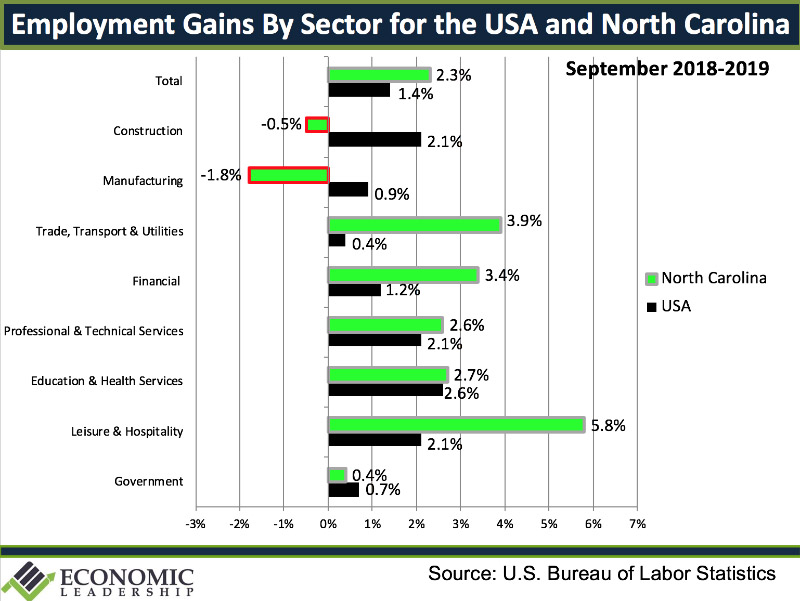 While unemployment has hit historic low levels, Abernathy said job growth has been slowing down over the past 18 months. Abernathy said some people attribute this to politics while others suggest the country is approaching full employment, with fewer new workers coming into the market.

“It’s likely a little of both,” Abernathy said.

Abernathy also started his presentation by saying one trend around the country is a limited workforce, as there are not enough people with “middle skills,” namely trades and specialty medical training.

“I can’t find anyone that says they have enough trained people,” Abernathy said.

Another problem for municipalities specifically is that infrastructure is no longer being paid for by the federal government and municipalities are looking for ways to handle things on their own.

“They don’t know how to pay for it. No one wants to tax anyone else,” Abernathy said. 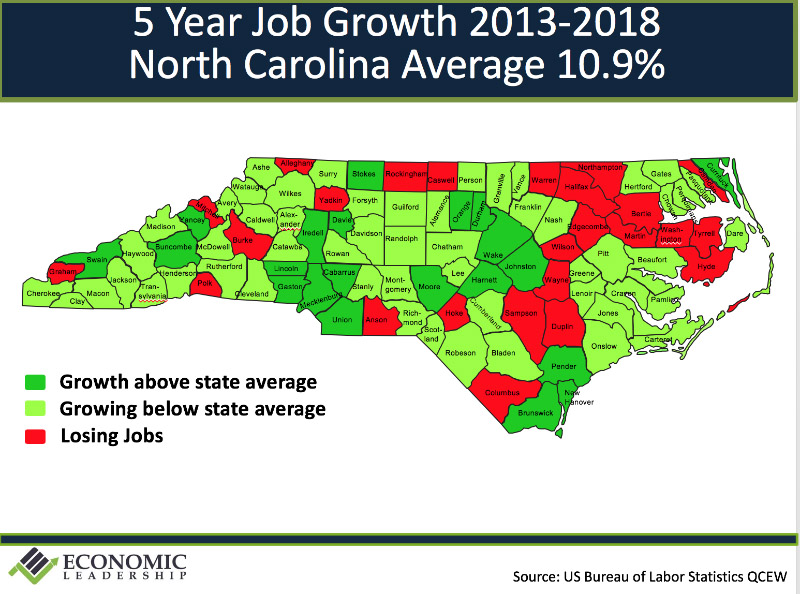 Consequences of the Economy

Of all the counties in North Carolina, Wake County has grown the fastest, adding 209,000 people over the past 20 years. But at the same time, many counties, particularly in Eastern North Carolina, have seen their populations shrink as people move elsewhere.

Additionally, more than 60 percent of North Carolina’s economic growth has been in a handful of “urban” counties. And while manufacturing job growth has been more than 8 percent over the past five years, it is slowing down recently, in addition to construction job growth.

These are the kinds of jobs that grow the GDP, Abernathy said. While North Carolina and Wake County have seen growth in hospitality and service jobs, he said these do relatively little to boost GDP.

The other sector with growth is white collar jobs but Abernathy said these are happening in fewer and fewer areas, with North Carolina and Wake County in particular as one of those few locations.

“We haven’t had much enforcement of anti-trust laws, so with profits high, you’re seeing consolidation,” Abernathy said.

For his prediction of the next year, Abernathy said the global economy will likely slow down as companies and countries wait to see the outcome of the 2020 presidential election.

“But I won’t try and guess that one,” Abernathy said. “I’ve already gotten that wrong twice in the past 12 years.”

How the Town of Cary Wants to Tackle Climate Change