Cary, NC – Any fans who saw the Carolina Hurricanes play at home this weekend saw an unforgettable marathon of a match where the Canes won in triumphant fashion, which may have drained some of their energy as they lost another long game against the New Jersey Devils the next night.

The Carolina Hurricanes beat the Detroit Red Wings 7-3 in what seemed to be a track meet as not even during any powerplay was the play slow. The Red Wings are a class organization, have a great following in the Triangle area and many showed up hoping for, and got, a good game, but with a different outcome than the Wings faithful were hoping for.

The Wings have two very good lines but little offensive support after that. Their defense is one of the oldest in the league with many past their prime when several were some top D-men in the league. Their forwards are fast, really fast, which falls into the type of game the Canes like to play.

The Canes won the opening faceoff and immediately started with early pressure getting off one quick shot well before many in attendance were in their seats. The Wings got control then started up ice for a partial breakaway but Andrei Svechnikov made an excellent play to breakup a 2-on-1 from behind. Nino Nieddeirter must have said something other than “good call” to the ref after he was taken down along the near boards making it 4-on-4, negating a powerplay.

The Canes had the better play of the 4-on-4 play keeping the puck in the Wings’ zone and constant movement. Sebastian Aho had the puck up high passing over to Dougie Hamilton. Dougie tried to go along the near boards but got pinched to turn around going along the inside of the blue line. Jaccob Slavin got into open space along the far half board, made slick move to be able to go through the circle to the goal. Just as he got around his defender, he laid a perfect backhand pass while faking a shot, to draw goalie Jimmy Howard, to Svech as he was charging down the slot.

Svech put a hard back hander into the wide open side of the goal all set up by Slavin. The league is still talking about the lacrosse style goal Svech scored in the previous game with some even talking about calling that goal a “Svech” when it happens again by anyone. Late in the period Anthony Mantha scored a goal off a pass after a pretty play by Andreas Athanasiou. 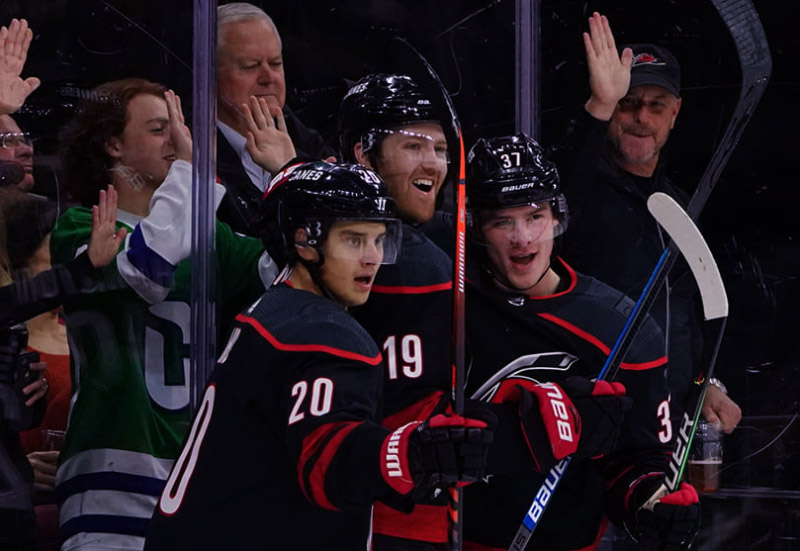 Early in the second, Slavin sent the puck into the crease area where Svech was standing his ground. Just as he was being taken down, he swatted at the puck but missed however Seabass went behind Svech and managed to knock it in. Just over a minute later, the Canes were on the powerplay. Jake Gardiner had the puck low, passed up to Seabass on the right point quickly, sending it back to Gardiner. Gardiner dangled the puck for a while waited for traffic in the dirty are then sent a hard pass hoping for the best.

El Nino was in front as if he was swatting flies as the puck was loose in the blue area. One of the swats hit the biscuit, sending it in the net but the refs immediately called it off. Replay showed it was indeed a good goal. Just moments later, Seabass had puck along the boards, passed to Warren Foegele who quickly passed back to Seabass. Seabass carried the puck into the Wings’ zone, pulled the defense towards him and fed a perfect pass back to Foegs for a pretty one timer that was ruled, and was, offside by inches. Mantha scored his second of the game on a Wings powerplay to give the Wings’ life.

After the faceoff, the Wings had possession in the Canes’ zone but were forced to stay along the boards and blue line as the Canes’ forechecking was spot on. Ryan Dzingel broke a pass along the blue line but the Wings backtracked to keep control. DZ kept forechecking through the neutral zone forcing the Wings to retreat into their own end. On the breakout attempt, DZ intercepted a puck going into the Wings’ zone, made a swift move to go around two players then sent a cross ice pass right to Martin Necas’ tape who punched the puck in the net for 4-2 Canes lead.

The Canes kept the forechecking going when a few minutes later after the Wings started to break out of their zone Seabass stole the puck keeping it in the offensive end. Fortunately during the play, a Wing player lost his stick allowing Seabass to snatch the puck and send it to Hamilton charging in over the blue line. Hamilton sent the puck with a wicked wrister that completely missed the net and hit the glass, giving a fortunate bounce to the right side of the goal.

Svech and Seabass were there along with two defenders and Howard but Seabass was able to get his stick on the puck and squeeze it in to chase Howard out of the net after making it 5-2. Late in the period, Tyler Bertuzzi close the gap by finishing a nice play which turned out to be the Wings third goal by the backdoor.

The Wings started the third with a powerplay but it was the Canes who seemed to have the man advantage. Forechecking once again resulting in a turnover with Brock McGinn being a pest in the Wings’ end. McGinn’s tenacity and drive forced the turnover allowing Ginner to steal the puck then make a pretty toe drag around a defender to put one in over Jonathan Bernier’s shoulder for a shorthanded goal and Ginner’s first of the year.

The Wings shortened the bench for a good part of the third period as it seemed the first two lines were the only ones on the ice. In a desperation move, coach Jeff Blashill pulled Bernier with over three minutes to go as the Canes were on the short side of a man down situation.

The Canes successfully killed of the penalty and with 3:22 left in the game Slavin stole the puck in the neutral zone along the near boards drawing a defender flipping a pass to Teuvo Teravainen who settled the puck and put it in the empty net after beating a defender going for a block ending the scoring for a solid 7-3 win. The Storm Surge was a soccer penalty kick by a player from the Champion Carolina Courage soccer team.

Once again on paper, this shouldn’t have been even close as the Canes are better in every category of this young season. The Devils only had two wins prior to this game and hadn’t yet won a game on the road. Like the Canes, they also played the night before and had to travel, albeit not far, to get to Raleigh.

Only things they have, on paper, going for them are several #1 overall draft picks and a former Norris Trophy winner, in PK Subban who some say may be passed his prime but still is one of the most entertaining players who gives 100 percent on every shift. The Canes lost a 5-3 game that felt as if it actually had more goals than that. 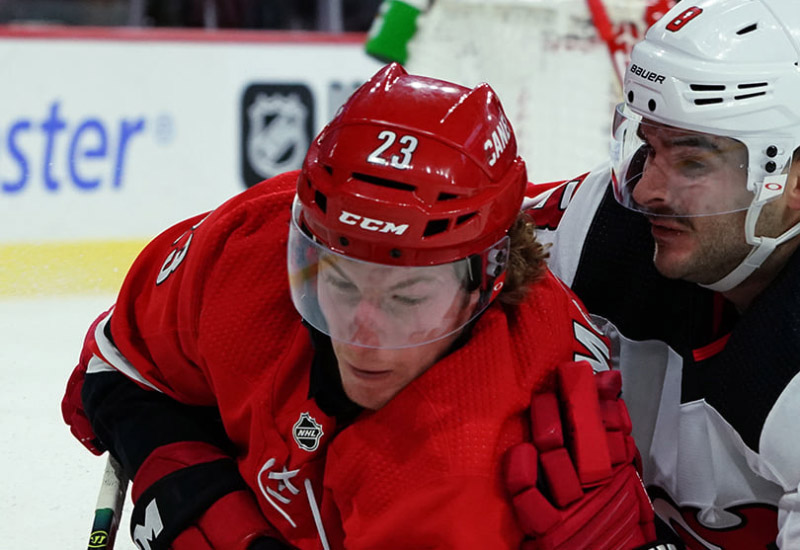 The game started out sluggish, which could have been a result of playing the night before, but there’s not one Cane player that would admit to that. Not with Rod Brind’Amour as coach and Bill Burniston as Strength and Conditioning coach.

The Canes had the first attack of the game that almost resulted in a goal on the first shift of the game. After three faceoffs, in the first 10 seconds, the Canes’ Sebastian Aho finally entered the Devils’ zone legally bringing the puck down low drawing two defenders. Aho saw Andrei Svechnikov coming down the left wing all alone and passed cross ice through a maze of players but the puck bounced over Svech’s stick for what could have been an early goal and possibly game changer.

The Devils survived that attack then started their own offensive game putting James Reimer to the test with a couple of heavy shots. Reimer hasn’t played in a couple of weeks mostly due to the goofiness of the schedule when the Canes had so many days off between games. After a square-off, of both first lines in which the Canes kept the puck in the Devils’ end for the entire shift, the second lines jumped the boards. A little over the seven minute mark, Jake Gardiner brought the puck up along the far boards, sliding a pass to Seabass. Seabass circled then scanned the ice for a teammate, passing to Warren Foegele speeding down the middle. Foegs made a nice forehand, backhand move then slid the puck between the legs of Mackenzie Blackwood for the 1-0 lead.

It was good to see Foegs get that goal after having one called back the night before for, as the replay showed, being offside by inches. The Devils answered less than four minutes later when Miles Wood scored off a Wayne Simmonds shot that careened off the lively backboards and stuffed it in at the same spot Seabass scored off the same lively board the night before. Teuvo Teravainen put the Canes back up by on on a powerplay goal with assists from Svech and Erik Haula. Jack Hughes, the #1 overall pick in this year’s draft scored his third of the season on a heads up play. Taylor Hall, another #1 pick took a hard shot that Reimer stopped but lost site of the puck. Hughes saw the puck curled in Reimer’s skate and quickly swatted it in to tie the game.

Before most people were back in their seats, the Devils took the lead. Andy Greene poke-checked the puck off the stick of Seabass who then got out muscled by Nico Hischer, another #1 overall pick, who did a slick move around Jaccob Slavin then sent the puck to the top of the net.

Midway in the period, the Canes tied it on a very pretty and skilled play by Ryan Dzingel. DZ carried the puck down left wing continuing behind the net. Just as he started to pass the near side of the net he sent a crisp backhanded pass to Haula racing down the slot who banged it home to tie the game. The rest of the second period was sloppy all over.

Forechecking was nearly non-existent, passes were at best called attempts at passes and everyone started to play with a little “chipiness.” At the end of the period there were some words, possibly in a few languages, that resulted in only two players getting offsetting penalties to start the third.

Within the first seconds of the third, with each team a man-down, both teams found each other as if it was an overtime as there was nearly a full two minutes of 3-on-3. Both teams survived the manpower shortages but it wasn’t long after that Subban scored on a nice tip in off a pass from Wood but that shot got the Canes coaching staff all riled up about another lack of coverage.

The Canes just couldn’t muster any decent chances the rest of the period while the defense played their best all game. High scoring chances for either team were hard to come by and when they did, both goalies made the easy stops. Roddy pulled Reimer with a little over three minutes to go and Damon Severson scored on a 185-foot clear from his zone with under a minute to play to seal the Devils’ win.

Next home game is Thursday, November 7, 2019 against the Rangers. Be there!

Economic Growth Steady According to Ted Abernathy at Cary Chamber