Cary, NC – Sometimes you bring your A-game with just about everything going your way and you still lose. That’s what happened to the Canes when they ran into future Hall of Famer goalie Henrik Lundqvist, who was a wall as the Canes fell 4-2 in a contest they dominated and easily had possession 75 percent of the time in the first period.

What More Could The Canes Do?

Coach Rod Brind’Amour had to be at a loss for words after the first period as the team probably played their best overall period yet this season. It was one small defensive lapse that allowed the Rangers to score late in the period. As is tradition, the Canes had rookie, Eetu Luostarinen, skate alone for warmups for a minute before the rest of the team came out. Eetu played an errorless game and came oh so close to getting a goal in his first NHL game.

The Canes were doing most everything right during the period, everything right but scoring. They must have had at least 10 solid scoring chances that some times, fans just knew it was a sure goal and started cheering on the shot only to be left with their jaws dropped open. The strong presence of Ranger fans started the “Henry” cheer the Caniacs have been all too familiar with. Former Cane goalie Cam Ward was in the stands and possibly choose this game to attend as he and King Henry went head to head for years with Cam all too often ending up on the losing side. One of the many top scoring chances was early in the period with the Canes on a powerplay, Dougie Hamilton got a pass across the grain, took a couple of strides towards Lundqvist then wound up for a hard slap shot only to see King Henry make his first of over a dozen amazing saves.

Late in the period, Eetu drew a tripping penalty from Marc Staal giving the Canes their second powerplay however the passing and high quality attempts were no where as prominent as the first powerplay. Late in the period, after going over 15 minutes without a shot on Petr Mrazek, a bad defensive switch between Hamilton and Jordan Staal left Artemi Panarin, the most sought after forward during the offseason, all alone to bang in an easy goal off a feed from Ryan Strome. The period ended with the Canes taking 22 shots to just six for the Blue Shirts. 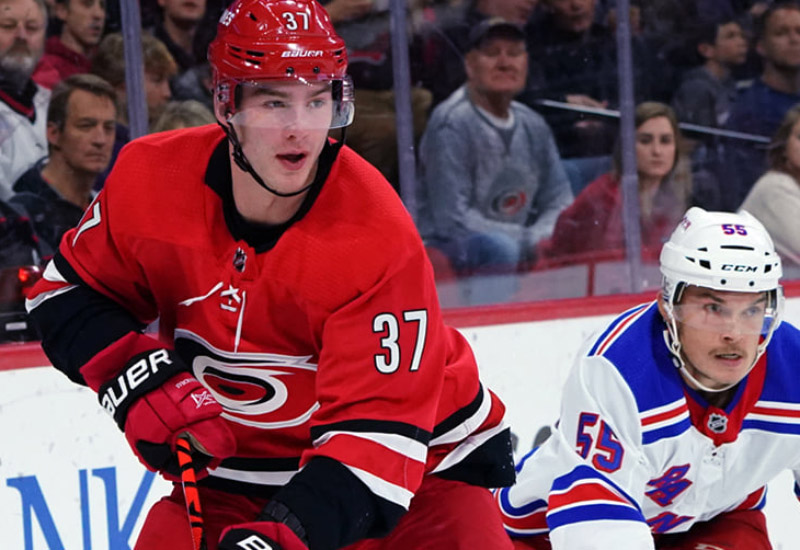 Hamilton Notches Eighth of the Season

The Canes continued their relentless pressure by getting the majority of possession and still attacking the Ranger goal. Unfortunately King Henry seemed to be getting sharper if that was even possible. Under any normal circumstances, the Canes should have had seven goals by the end of the second as they really were playing well. A trend, a bad trend, of late has been giving up goals either early or late in a period and that happened in all three periods.

After joining the rush on a breakout, Hamilton circled the goal and was headed back to the blue line when Jaccob Slavin sent a hard wrister towards the net as he saw traffic in front. Hamilton was about 12 feet in front of the net and tipped the puck for a pretty redirect to tie the game. The Canes’ penalty kill was very impressive on the Canes’ first penalty of the game by not allowing a shot on Mrazek.

Later in the period, Brett Pesce took what would be called a good penalty by tripping Kappo Kakko in the deep slot with a clear shot on Mrazek. The Rangers scored with just 18 seconds gone in the man advantage and 1:56 left in the period. One obvious flaw that Roddy had to mention in between periods is the special teams weren’t playing so special the last few games.

The Rangers scored at the 1:15 mark of the first putting the Canes in a deep hole. Another defensive allowed Pavel Buchnevich go in all alone on Mrazek and you could see Petr being upset after the goal. The Canes kept trying everything including another sure goal play that ended up like so many others: no goal. The Canes had a partial three-on-two with the Aho line passing back and forth keeping the defenders on their heels.

At the last second, Warren Foegele charged the net for an easy tip in off the perfect pass by Andrei Svechnikov but King Henry slid across the crease making an unbelievable save that hardly phased the netminder. Just under the 15 minute mark, the Canes finally caught a break. Seabass had the puck in the far corner with two defenders closing in, in a desperation move he centered the puck hoping for a teammate to jump in the middle but the puck hit a defender and went directly in past Lundqvist who actually almost made a save.

At this point the Canes would welcome Luck as a linemate. Late in the period, the Canes pulled Mrazek for the extra skater and of all players, Adam Fox, who was a Cane prospect but only wanted to play for the Rangers so the Canes got two draft picks in a trade, scored the open netter to seal the win. Tough loss at the end of the game, the Canes had 47 shots on net to the Rangers 22. There are no easy games in the NHL but Ottawa is one of the weaker teams who the Canes play the next two games, Saturday, November 9, 2019 in Ottawa and next Monday, November 11, 2019 in Raleigh. Be there!