Transportation and Housing in the Triangle

Price is chair of the “House Appropriations Subcommittee on Transportation, and Housing and Urban Development, and Related Agencies” and he spent much of both his opening remarks and his answers to questions talking about funding for these government programs, specifically in the wake of no budget agreement and the impacts of past sequestration.

“We’re already operating on a continuing resolution and we shouldn’t do that much further,” Price said.

In the House of Representatives, Price said they have passed 10 out of their 12 appropriation bills, but said President Donald Trump’s re-appropriation of funds to use in border wall construction in the February 2019 national emergency declaration has complicated what programs are supposed to get money. Price also said Trump has signaled he will take similar action in the future.

“It’s not only a problem for Homeland Security. It screws up the whole funding schedule,” Price said.

On the question of transportation funding, Morrisville Council Member Steve Rao asked Price about how to fund transportation projects in the state when revenues from gasoline taxes are going down, with low fuel and even no-fuel electric vehicles becoming more common. Price said there should be different ways to fund infrastructure and he said he was disappointed more infrastructure projects were not passed in the stimulus package in the early Barack Obama presidency.

“If we don’t get transportation construction under control in the Triangle, we’ll go the way of Atlanta and Austin,” Price said.

Price also said he believes the gasoline tax needs to be increased.

Another transportation question Price got was about the Amtrak train system and how to get it funded. Price criticized Republicans, saying they are blocking Amtrak’s “Gateway Program,” a planned train corridor between New York and New Jersey. Locally, Price said North Carolina made the right decision by taking stimulus funding and focusing it into an Amtrak connection between Charlotte and Raleigh.

“Many people have talked about a transcontinental system, but right now, I think the future of Amtrak is probably regional service,” Price said.

On the housing side, one attendee asked about affordable housing, specifically affordable housing for people with disabilities and how to ensure compliance when landlords and developers did not follow anti-discrimination rules. Price said that he has pushed for funding for housing for people with disabilities and the committee itself has pushed for enforcement but to make sure rules are followed, it comes down to who is in charge at all levels. 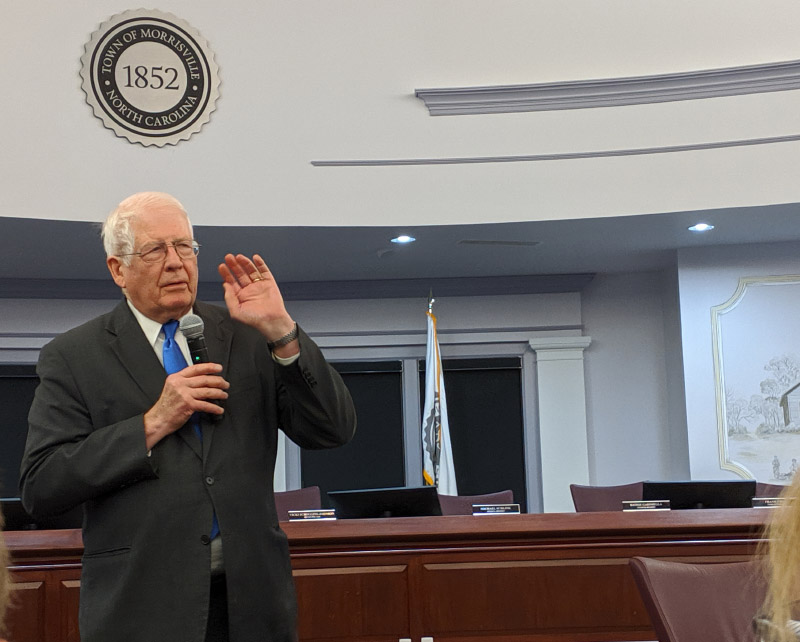 During the town hall, there were two different speakers asking Price about whether he would support a single-payer healthcare system, which both he and speakers also referred to as “Medicare for All.” Price co-sponsored a Medicare for All bill in the House in 2017, though at this town hall, he did not say this is the sole healthcare policy he wants to pursue.

“I think Medicare for All should be debated along with other proposals,” Price said.

In his opening comments before taking questions, Price said he wants to “fix the Affordable Care Act,” including expanding Medicaid in North Carolina. Also, Price said he supports allowing people aged 55 to 64 to buy in to Medicare.

Price also rebuffed one question about getting financial interests out of health insurance and whether having a universal government program will make it less likely to be cut.

“If you think Medicare is off-limits, look again,” Price said, referring to cuts made in the mid-1990s. “It can be messed up badly by political interests.”

Price was also questioned by one speaker who talked about high healthcare costs for his family, particularly with his wife’s cancer and dental treatments and his son’s diabetes, all while also balancing student debt, then asked Price why Democrats running for the presidency want to give, in his words, free healthcare and free college to non-citizens.

Price rejected the idea that all the Democratic presidential candidates are pushing for the programs he described but he said the high premium costs of the attendee are a serious problem and need to be brought down. On the subject of student debt, Price said he did not support free public college or wiping all student debt but he said there needs to be a better balance.

“Borrowing student loans can be part of paying for education but it shouldn’t be the dominant part,” Price said.

Price started his town hall by saying America is in a “critical time” with the impeachment proceedings and said the process gives him “no pleasure,” but he believes the charges against President Donald Trump go to key constitutional issues of abuses of power.

One speaker asked if Price would support a vote of censure against Trump, as he did in the 1990s during President Bill Clinton’s impeachment hearing. Price said he supported censure at the time because he did not think what Clinton did dealt with constitutional issues and abuses of power.

“The remedy should fit the offense,” Price said.

Another speaker voiced support for Trump and said he thought the impeachment proceeding was based on falsehoods, then told Price he was opposed to him and asked when he would retire.

“You’ll be the first to know,” Price said.

On immigration, Price had two questions, one from a man immigrated from India and one man from China, who both asked about the process to get green cards and how to make it fair. Currently, each country has a limited number of green cards immigrants can receive each year, meaning people from countries with a larger number of immigrants have to wait longer. While the two speakers seemed to disagree on what system would be the fairest, Price appeared to support a “first-come-first-serve” system not limited by country, calling the idea “elementary.”

One speaker brought up concerns about climate change and the environment and asked if Price would support going beyond resigning to the Paris Climate Accords, which he brought up earlier in the town hall. While Price said he wants a tax on carbon and funding for research into clean energy and transportation, he said he and his party need to focus on how to get into office first.

The next Morrisville Town Hall has not yet been scheduled.