Cary, NC – This week was a slow week due to the holiday.

Monday was Veteran’s Day which included a program at the Veteran’s Memorial in Cary. Veterans and their families have given so much to protect our freedom and keep us safe. If you see a veteran, please thank them for their service.

Tuesday I met with developers who are proposing to redevelop the mall site. My main two points for this meeting was the potential traffic and the aesthetics, especially the multi-family along Walnut. The developer’s representative sent this information about the traffic: 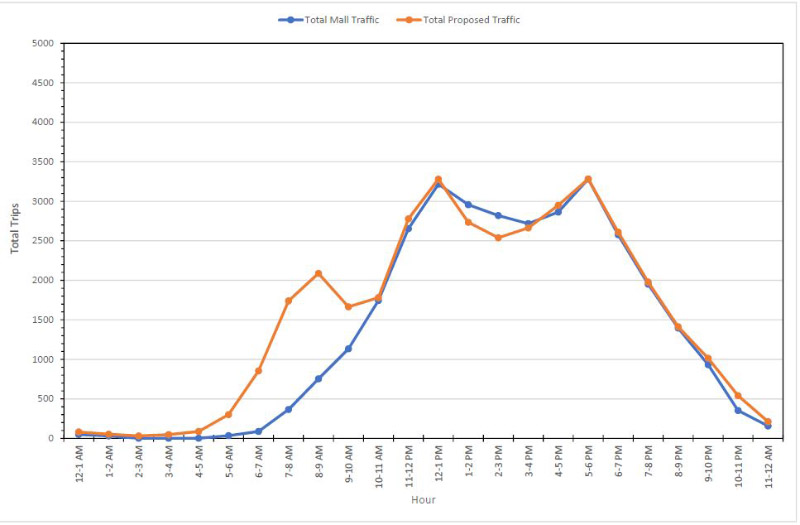 So in summary, the traffic manuals estimates the traffic generated would be virtually the same as the full functioning mall except for the morning rush hour. This is based on the proposal of 900-1800 apartments. The two mall signalized entrances, one on Walnut Street and one on Cary Towne Boulevard, are proposed to be in the same location and would experience a 3% increase in traffic. In fact, those entrances could see a total of 4800 multi-family units before they would fail. Traffic at the Walnut-Maynard and the Cary Towne-Maynard intersections are another story. They are already an issue and will require improvements regardless of this proposal. And if the town builds a community center on the mall site then the town and the mall owners would be responsible for the improvements at the Walnut-Maynard and the Cary Towne-Maynard intersections. It is important to point out that traffic measurements included the Fenton buildout. The Fenton project is responsible for several road improvements including some at the I40 interchange.

The aesthetics of the proposal would be based on a mutually agreed upon guidebook. Residential along Walnut Street the height could be as much as six stories for multi-family. This would have a 35-foot streetscape on Walnut including a 10-foot sidewalk, a landscaping buffer, upper and lower story trees. The guidebook shows high end units that vary in their relation to Walnut Street to prevent that wall feel. In addition, the building could and should be broken into two or more buildings instead of one. Staff has said they will be very aggressive enforcing the guidebook.

This proposal will go to the council for a vote in December.

My last meeting on Tuesday was with the group representing the Daughters of the American Revolution who are looking to expand on the play they did a couple of months ago (where I played George Washington). It is my hope that this play becomes an annual event including activities before/after the play. In addition, we might see a play for our 150th celebration.

Saturday I joined council member Robinson in celebrating the Hindu Indian Association of North Carolina’s Children’s Day. I made a few remarks and read a proclamation. Children’s Day was to allow children in the community to showcase Indian dances, music, art and fashions. It also provides them the ability to demonstrate leadership skills by running the entire show on their own. Honors and awards were also presented at this event. 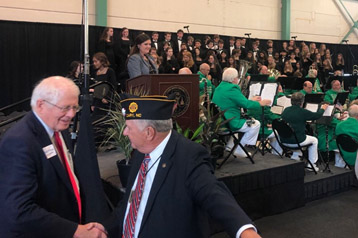 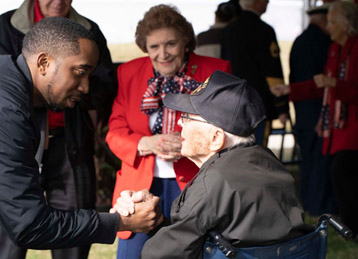 Pictured above is WWII veteran and Cary resident Fred Reidenbach, USMS, one of approximately 300 people who gathered at the Veterans Freedom Park on November 11. Councilman Smith opened the day, introducing The Old North State Brass Band and welcoming speakers Lt. Col. Bernardine Donato and Chaplain Carmen Battle. Councilman Yerha read a proclamation. Attendees were encouraged to write the names of friends or family members who served in the armed forces on tags attached to plastic soldiers representing the branches they served in. The North Carolina USO provided bottled water. New this year was a WWII display which included vehicles, weaponry, and artifacts. Thanks to all who came out to honor our local heroes! 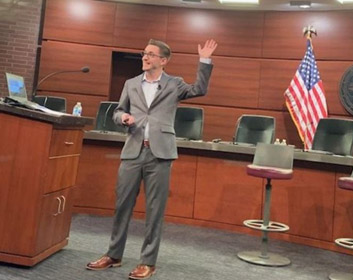 After experimenting with format and frequency and working closely with Organizational Development Manager Allison Hutchins and our team at CRA, we’ve established what appears to be an effective approach to our All Hands meetings. In addition to presenting and taking questions, I share time with a staff member who talks about recent work as it relates to our co-created culture. This week featured Luke Guthrie who did an amazing job talking about collaboratively creating the new registration experience for PRCR programs and facilities, which launches in December; Council will recall your preview from Luke and Wilson Farrell at our August Quarterly. For my part, I provided an update on the November Quarterly Meeting and talked about our work with CRA to increase the effectiveness of our internal communications. 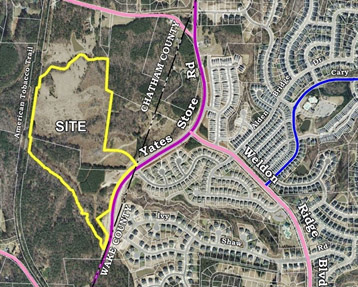 The applicant has withdrawn the Weldon Ridge rezoning case (17-REZ-13). The request was to rezone 62 acres on the west side of Yates Store Road south of New Hope Church Road to amend the Weldon Ridge Planned Development District (PDD) to allow for additional residential units and to move the location of the school site to front on Yates Store Road. With this withdrawal, the existing entitlements for the S 1 and SF 6 tracts of the Weldon Ridge PDD remain in place. These existing entitlements allow 46 residential units and a school and religious assembly use. If the applicant develops under the existing entitlements, a development plan may be submitted and approved administratively. Staff sent notification of the withdrawal to all citizens who have contacted staff and council members with questions and concerns throughout the duration of this rezoning case. 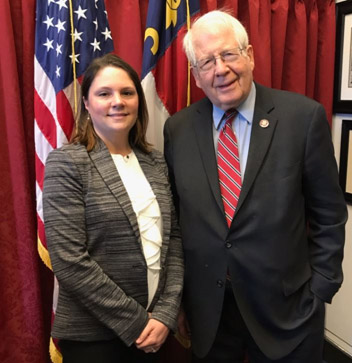 GoCary Transit Administrator, Kelly Blazey, traveled to Washington, DC to thank our congressional delegation for their continued support of transit initiatives. The North Carolina Public Transportation Association (NCPTA) met with staff from all 13 North Carolina congressional offices as well as the House Transportation & Infrastructure and Senate Banking, Housing and Urban Affairs sub-committees, APTA, CTAA and FTA to discuss the importance of a reauthorization of the FAST Act, continued funding for capital investment grants, and increased support for formula funds. In 2018, transit agencies in NC provided over 6 million trips and had an economic impact of over $800 million. 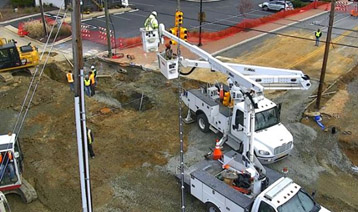 On November 4, Bruce Allen Construction Company installed traffic control devices to temporarily close the intersection of Chatham Street and Walker Street. The temporary intersection closure is necessary to complete underground storm drainage, sewer line repairs, water line improvements and new underground conduits for relocation of overhead utilities. Cary police and staff continue to monitor traffic flow and parking on adjacent streets to ensure traffic is maintained adjacent to the intersection closure. Driveways to citizens, churches and businesses impacted by the intersection closure are being maintained. Before the closure, nearly forty “Downtown Businesses OPEN During Construction”signs were installed at strategic locations. As of November 9, the storm drainage, sewer repairs and underground conduits were substantially complete. Water line improvements, grading and paving were scheduled for November 10-18 but, due to the rain, the intersection opening will be delayed until the middle of next week. 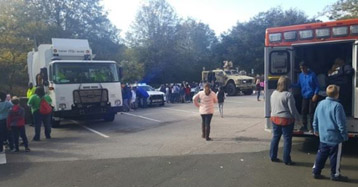 Northwoods Elementary School held their annual “Local Heroes Day” on November 8. Cary staff from Public Works and Police demonstrated their equipment and answered questions about their jobs. Personnel from the US Army and the NC Highway Patrol also attended, showing their equipment and informing the students of their functions in the community. 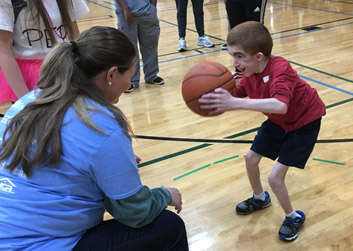 The Special Olympics Basketball Skills competition was held at the Middle Creek Community Center Thursday and Friday. Competition was intense, but not as intense as the fun for both athletes and volunteers. 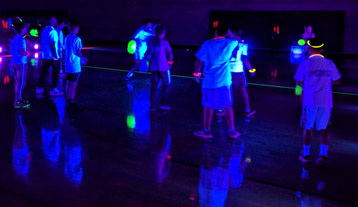 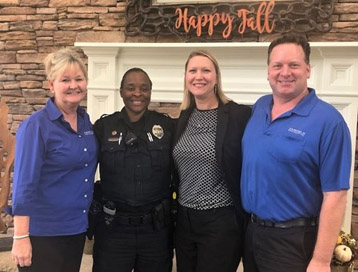 Officer Lekisha Branch partners with residents and management staff of the Park at Crossroads to become involved in community affairs and tailor services to the unique characteristics and needs of the community. Property Manager Marsha Amy Dutkowski said, “Lekisha is the best PHOENIX Officer ever! She is so responsive and informative and always willing to help in any way she can.”

Emails from citizens included the following:

Well, that is all for this week. My next post will be on Sunday, November 24th.  Although I have Facebook and Twitter accounts those are not the best means of communications with me. Please send all Town of Cary questions or comments to Harold.Weinbrecht@townofcary.org and email personal comments to augustanat@mindspring.com.