Cary, NC – Coach Rod Brind’Amour wanted the Canes to bounce back after a strong start then virtually giving the last game away and the Canes responded in an incredible manner. In a reversal of their previous game in which they went up with two early goals, the Canes found themselves down by two goals within 16 seconds in the nine-minute mark.

After the Cats’ second goal, Roddy had blood vessels in his neck popping out as he was maybe not so politely telling his team to turn things around or he would, once again, lead the post game workout.

The first period was about as exciting of a period the PNC Arena has seen this season, much to the appreciation of the nearly sellout crowd. The Panthers are a very good team and have been hot lately, winning five of their last six and started strong. If it wasn’t for an excellent defensive play by Brett Pesce, the Cats may have had an early goal as Pesce was the lone defender on a partial 2-on-1 break. Ryan Dzingel had a couple of shifts he’d rather forget midway in the period. One shift he got called for high sticking but was really better acting by Josh Brown as DZ’s stick rode up Brown’s stick, stopping on his chest, but Brown’s Oscar performance as if he got hit in the face fooled the ref who was behind the play. The top ref should have overruled the call but supported the other official.

The Cats’ powerplay looked as strong as any the Canes have faced all year, but fortunately, the Canes’ penalty kill team did an outstanding job. Brock McGinn was on fire, ragging the puck and sometimes it looked as if he was defending one playing hard who made a pass and got to the other player almost before that player received the pass. Jaccob Slavin, Hamilton, Pesce and Edmundson’s hard line defense on the PK did not go unnoticed.

After DZ’s penalty was over, he joined the play in the Canes end. It didn’t take long for All Star Aaron Ekblad to take the puck from the right point, stick handled around DZ, then went in on Petr Mrazek all alone for a nice backhander. Roddy wanted that line to get redemption but that didn’t happen. The Cats won the faceoff and dumped it in the Canes’ end.

On Hockey Beats Cancer night, cancer survivor Brian Boyle used his big body to tie up DZ along the near boards, broke free to receive a pass and with the step on DZ, went top shelf glove side for a quick 2-0 lead. The Canes won the next faceoff and started with pressure in the Cats’ end. Joel Edmundson joined a rush and was caught down low but passed up to Teuvo Teravainen covering on the right point. Turbo made a pass along the inside of the blue line to Pesce who, as Dougie Hamilton put it, shot the hardest shot of his career for his third of the season to get the Canes on the board just 41 seconds later.

Marty Necas tied the game just under five minutes later on a pretty pass from Hamilton after faking a looked towards the goal, but it was the D to D to D passing between Hamilton and Slavin that set things up. The first period was great for fans, not so comforting for coaches or Keith Yandle who took a puck to the mouth, lost a few teeth and did not return the rest of the game. 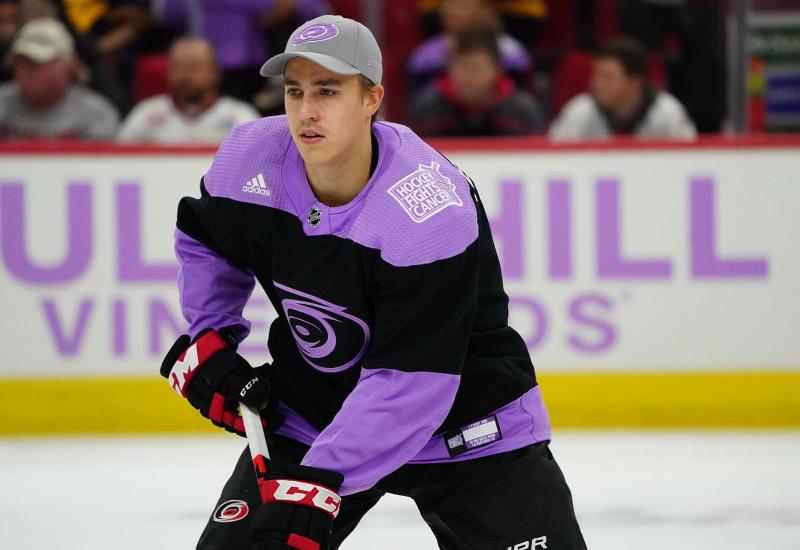 The Canes started to really dominate the game in the second even though they started the period a man down after Pesce took a “good” penalty with 21 seconds left in the first. The Canes’ PK stepped up and held the Cats to just three shots, allowing Mrazek full view of any rubber headed his way. The third line of Nino Neiderreiter, Lucas Wallmark and Necas played great and aggressive all period. El Nino, although he scored in a recent game, is below what he and the team expects of him so far this season, however he was constantly around the puck and digging hard for wins.

Sergei Bobrovsky was the prized goalie free agent during the offseason but has been just average so far this year. Wallmark took a hard shot that Bob saved with his chest but he bobbled the puck, letting it trickle between his legs with El Nino battling for the puck behind the goal tender only to have Ekblad freeze the puck against Bob’s pads. Roddy has to be pleased with El Nino’s tenacity even though he’s not putting many pucks in the net.

The Cats won the next faceoff and methodically brought the puck into the Canes zone. Quick passing had the Canes scrambling allowing Ekblad to get off a hard shot from about 20 feet out. Mrazek made a hard stick save that went right back to Ekblad who slammed it to the far corner but Mrazek made an outstanding pad save. On the Canes’ next rush, Pesce got a pass from DZ and missed his second of the night by inches as Bob stretched to toe the puck clear.

After a line change, Andrei Svechnikov was using his strength to forechecking along the boards and came away with the puck quickly passing over to Turbo. Turbo did a pirouette in the near corner then fed Hamilton racing down who slapped it home for his 10th of the season putting the Canes in the lead. The Canes’ defensemen as a whole, lead the league with 20 goals. Quite an improvement over what Caniacs have seen in the past. 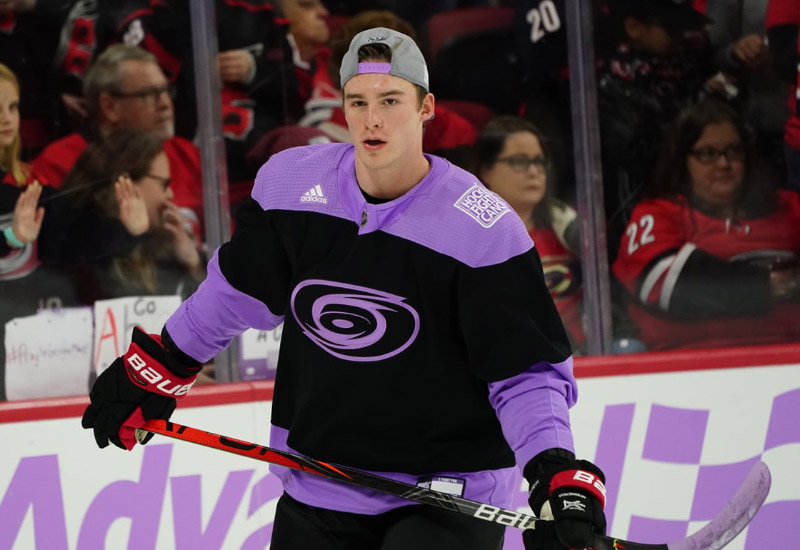 The Canes continued their dominance in the third, having possession for a very high 67 percent of the time and 64 percent for the game overall. Against the Panthers, that’s an unbelievable statistic as the are a solid and well-coached team. Coach Joel Quenneville is a fantastic coach who gets 100 percent from every player. Roddy does too and is a players’ coach, with each player willing to walk through a wall of fire for him, probably because they’ve seen Roddy do that his entire career.

The Canes continued aggressive play in the third was enthusiastically received by the Caniacs, especially after a TV timeout and singing alone with Neil Diamond’s Sweet Caroline. More so than the Canes, the Panthers take very few penalties and surprising with their solid D-corps, their PK is just average. It wasn’t until very late in the game the Canes got their first man advantage when Boyle tripped Edmundson as Fast Eddy was trying to skate along the boards. The Canes’ powerplay looked good, got off a few good shots but couldn’t beat Bob.

The Canes had their second powerplay with just five minutes left thanks to Ginner. On a bad line change that looked like the Cats had all 18 skaters on the ice, Ginner just stopped and appealed to the ref as if he was asking “ok, any suggestions on who I should cover?” It was after that, the ref blew the whistle for too many men on the ice. The Cats killed off the penalty but the Canes continued pressure in their offensive zone made pulling Bob a difficult task.

Quenny finally got the extra skater with 1:28 left and after two long shot attempts that resulted in icing, with just over a minute left, Sebastian Aho used every inch of his long stick to skooch the puck over the Turbo who cleared the zone. Svech used his speed to get the puck in the neutral zone and with a defender on him managed to get the puck on the forehand and send it into the middle of the goal for his 11th of the season and seal the win.

In talking to both Svech and Hamilton before the season, each predicted the other would have 50 goals this season. They’re good friends off the ice so maybe this challenge could have some merit. Should be fun to watch. Great resilient win by the Canes after the wretched loss two nights earlier.

Next game is against Nashville, and former Canes Stanley Cup coach Peter Laviolette, on Black Friday – Friday, November 29, 2019. Be there! 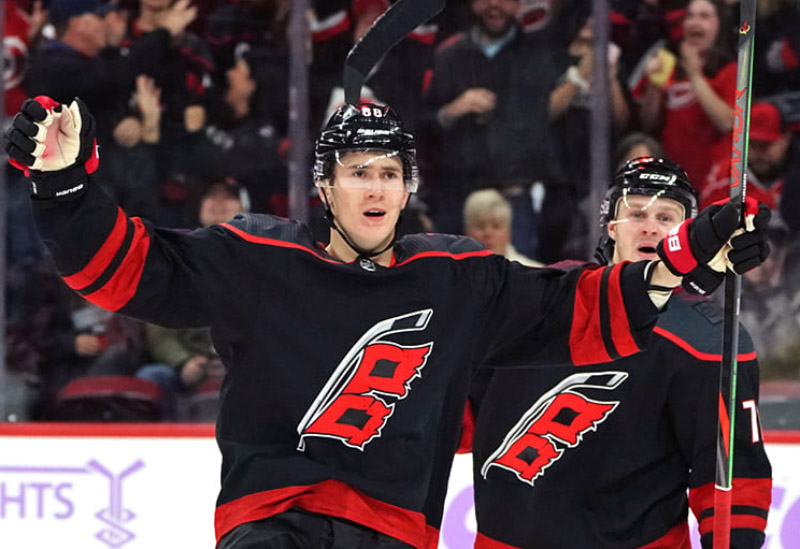