Cary, NC – This week’s Cary Town Council meeting saw the presentation of the 2019 Hometown Spirit Award, as well as a Public Hearing on a proposal to rezone land off of Green Level Church Road for townhomes and a vote to appropriate money for the Downtown Cary Park.

Note: Council Member Jennifer Robinson and Mayor Pro Tem Lori Bush were not in attendance at this meeting.

At the start of the Thursday, November 21, 2019 meeting, the 2018 Hometown Spirit Award winner Guy Mendenhall read out this year’s winner. Out of the three nominees – Frank Yarborough, Sharon Lake-Gargano and Anthony Blackman – Blackman won. Blackman is the president of Atlantic Tire and Service and donates to a variety of organizations and events around town. Blackman was also this year’s Cary Chamber of Commerce Citizen of the Year.

Of the three Public Hearings on the agenda, the one that saw the most discussion was a proposal to rezone 18.6 acres of land off of Green Level Church Road to make it Transitional Residential Conditional Use. Those conditions include townhomes as the only type of residence on the property, with a maximum of 90 townhomes. Also, there is a minimum 5,000 square foot community gathering space, which is 1,000 feet larger than Cary’s ordinances require. Other conditions include 30 foot buffers on the perimeter, installing a pedestrian connection and an underground stormwater retention feature.

The land in question is adjacent to Alston Ridge Elementary School and the planned Alston Ridge Middle School. Traffic generated by these schools, compounded with traffic generated by this new residential plot, was the primary concern of the three speakers who came to the Public Hearing, all of whom were nearby neighbors. One speaker, the vice president of the nearby Homeowners Association, said their neighborhood only has one way to access Green Level Church Road and this will make that connection all the more difficult to enter and exit. The president of that same Homeowners Association also spoke and said there are already many townhomes and apartments in the vicinity, either built or zoned for the future, and asked that the proposal include single family detached homes. 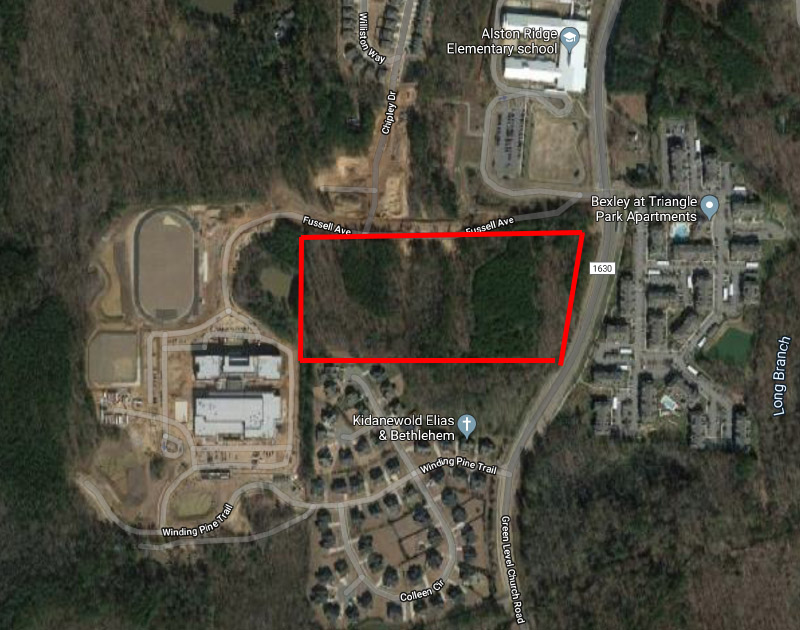 The approximate location of the proposed rezoning, with Alston Ridge Elementary and Middle School on the North and West sides

Town Council comments were brief but both Council Member Ken George and Don Frantz said the proposed community gathering space needs to be meaningful and not simply be a way to get around the stream buffers.

The HOA vice president also requested a traffic light for their busy intersection and Cary Mayor Harold Weinbrecht said that is something the state Department of Transportation has to install, though he did say the town petitions for them. The proposal was then sent to the Planning and Zoning Board for their feedback.

There were two other Public Hearings on the agenda, though neither saw any speakers. One of these was for a rezoning on currently unincorporated land off of Ferson Road, adjacent to the American Tobacco Trail. here is a related annexation petition but it has not come before Town Council yet.

This land, around 7.79 acres, is in a watershed protection overlay district and the applicant said he wants to keep this, while rezoning to R20 conditional use, meaning the minimum lot size per unit would be 20,000 square feet. Because of the size of the property, according to state law, the applicant has the option to subdivide without making any site improvements. 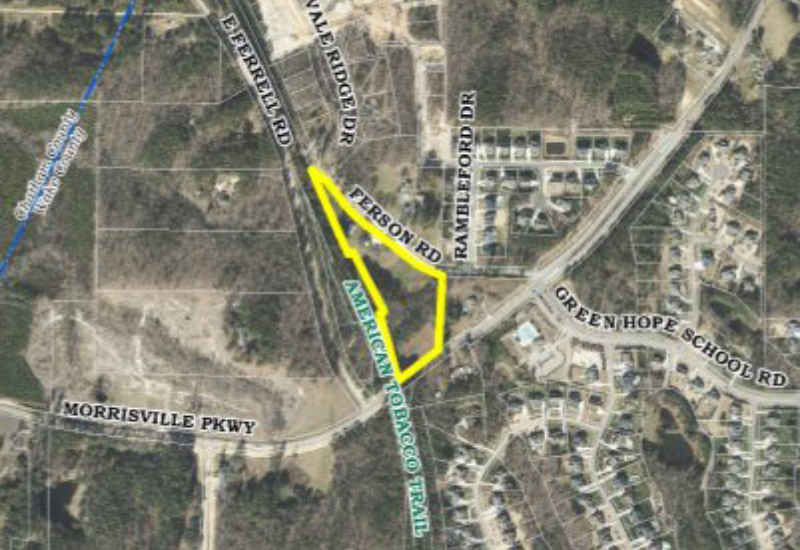 The location of the proposed rezoning and annexation

In response to this, the applicant has added several conditions, including a maximum of six lots, a right-of-way dedicated along Morrisville Parkway, several buffers, none of the lots will have direct access to Morrisville Parkway and add in curb-and-gutter. While there were no speakers at this Public Hearing, at the earlier neighborhood meeting about this proposal, town staff said community concerns brought up were traffic and the amount of rezoning in the area already.

Weinbrecht made clear his concerns about possible subdivision and he got confirmation that the applicant cannot legally include a condition that says he will not subdivide his property. The proposal then went to the Planning and Zoning Board for their recommendation, and the annexation request will come up at a future meeting.

The other Public Hearing was itself an annexation, for one property on Saunders Grove Lane. With no discussion or public comment, Town Council approved the annexation unanimously.

After Cary’s bond referendums for parks, recreation and transportation passed in the October election, Town Council had to do a procedural vote to certify the election results. But, in addition to that, Town Council could start to use some of the funds from the referendum now and they voted on appropriating $78.5 million of that money.

There were six speakers total during the Public Speaks Out segment, with several speaking on the same topic. There were two speakers representing the Friends of the Page-Walker, talking about their concerns about the Ivey-Ellington House being moved. Both talked about the benefits of keeping the historic house where it is currently, but if it has to be moved, the speakers said they want it preserved and they want Cary to consult with historic preservation organizations to ensure it stays on the register of historic sites.

There were two speakers who criticized the policy of developers clear cutting trees in Cary, including champion trees. One speaker also said replacement trees are improperly selected and planted, resulting not only in trees that easily die but also adverse environmental impacts from them not being incorporated into the ecosystem.

One speaker came to talk about the proposed rezoning off of Davis Drive and her opposition to it, which included the density and the unstable soil base. This rezoning has been indefinitely tabled by the applicant.

The final speaker said she has concerns about people driving through crosswalks, telling a story of her daughter nearly getting hit while walking through. The speaker requested an awareness campaign in Cary.

Canes Rebound With 4-2 Win Over Panthers
Scroll to top