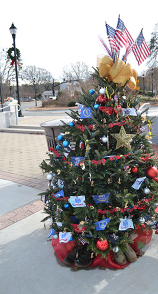 Cary, NC- The 2019 Town of Cary’s Gifting Tree Project had over 60 entries, the most entries ever in the eight years the Town has organized the contest.

Ryan O’Quinn, Town of Cary’s Outdoor Events Manager, stated that 2019 had the largest amount of entries, at sixty-six, forcing the Town to close out applications early this year. Seems there is a lot of hometown spirit in Cary!

What is the Gifting Tree Project?

The Town of Cary started lining Academy Street with trees sponsored by area businesses, non-profits, schools and families in 2011 after it was suggested by a former Hometown Spirit Award Winner in 2010. The town created an application hosted on the Town’s website, and anyone who wished to decorate a tree was able to apply in October. here is a nominal fee of just $30 that covers the cost of the tree. All decorations must be non-food and non-breakable, as well as able to withstand the weather. The Mayton Inn has sponsored the contest with a cash prize for the winner to be used in support of a cause they believe in.

The trees are then stationed all along Academy Street in wooden stands to be decorated the week after Thanksgiving and they remain on display through the end of the year. Voting typically starts the weekend of the Town of Cary Tree Lighting (the first Saturday of December) with voting closing the Saturday before Christmas. With sixty-six trees to choose from, the voting was tight. CaryCitizen had our tree displayed near the Fountain at the entry to the Downtown Park.

The Cary VFW tree was this year’s winner

The voting was tight this year with over 2000 online votes cast. This year’s winner was the Cary VFW post 7383  and their tree is pictured above. To see all of this year’s entries (including the CaryCitizen tree!) check out the Town’s website here.

Donna Wright, the VFW Auxiliary President spoke with CaryCitizen about their Gifting Tree.
“This was our third year entering the Gifting Tree Project. Our Auxiliary discussed ideas decided the decorations would represent the Veterans and Military. ” The decorations included toy soldiers that the group painted gold and the Auxiliary members made Buddy Poppy garland as well as garland made of flags representing each branch of the military including the POW/MIA flag.
“Our Veterans donated their combat boots that surrounded the tree.”

They plan to use the prize money next year at Christmas time when they send care packages to deployed troops and buy gifts for their designated Christmas family.

The trees will remain on display through December 27th with all decorations and the trees being removed no later than Jan 2nd.

Maybe CaryCitizen will get an honorable mention next year?

Story by Lindsey Chester, photo courtesy, The Town of Cary