Cary, NC – If you’re on a three-game losing streak, in which you’ve given up a ridiculous amount of goals with below average goaltending, facing the league’s best team in the Washington Capitals would not be among your top choice. Probably not even in your top 10 choices but they were next on the schedule and knowing coach Rod Brind’Amour, he could care less who they faced, they just needed to right the ship.

In a highly entertaining game that started off with one of the best renditions of the National Anthem by Tony-nominated Broadway actor Raman Karimioo, the Canes beat the Caps for the second time this year with a solid 6-4 victory. The game wasn’t perfect by any means, which Roddy will address as this was the first of a season-long, seven-game home stand.

Fiery Petr Mrazek was in goal and had both moments of brilliance and moments of wanting a second chance on a Cap goal, the defense, likewise, was fantastic at times but other times pinched at ill advised plays that resulted in turnovers.

The Canes had a great jump right from the opening faceoff and immediately put pressure on Braden Holtby. The Caps’ first shot came off a turnover by Nino Niederreiter that had Mrazek make his first of several nice glove saves. The Caps not only have three very solid lines, with a fourth line that would be a third on nearly every other team. They’re a big team that plays a very physical game and is always near the top of the league in hits with future Hall of Famer Alex Ovechkin, all 236 pounds of him, who skates at one speed, fifth gear, enjoying every opportunity for introducing an opponent to the boards.

Midway in the first period, Ryan Dzingel won a tough battle along the near boards dropping a pass to El Nino in the corner. El Nino circle, then made a sweet pass behind a defender in front of the crease to Lucas Wallmark who sent a quick wrister off Holtby’s stick into the inside of the far post for a powerplay goal and the 1-0 lead, one the Canes never relinquished all night.

Jaccob Slavin drew the short straw and looked like Roddy always tried to match him up against Ovi and while Ovi got off three shots during the first, Slavin blocked one with Mrazek making fine saves on the other two. Solid period by the Canes after a frustrating game against the Rangers in New York the night before. 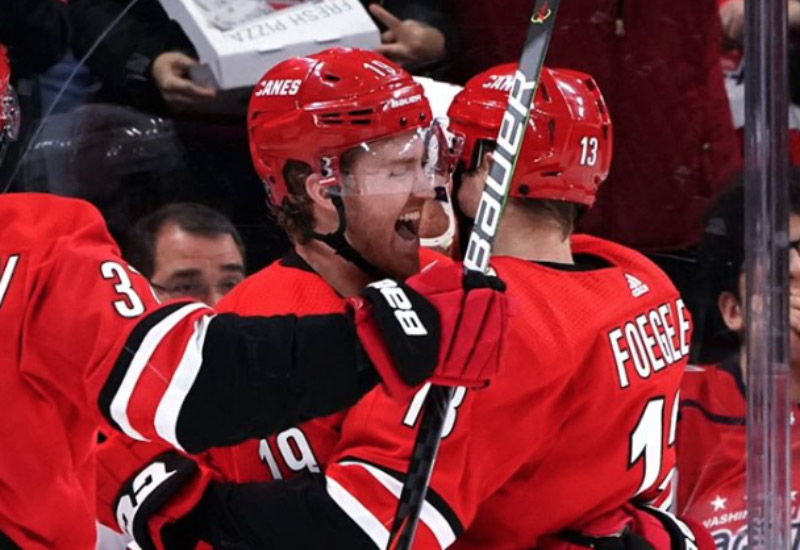 Jordan Staal won the opening faceoff to start the second period, drawing the puck back to Slavin the got a return pass in the neutral zone near the far boards. Staal held onto the puck with Warren Foegele speeding down on the right wing side. slamming home a saucer pass from Staal for a 2-0 lead just eight seconds into the period. Like Slavin, Staal’s line saw a lot of the Ovi line all night and frankly were the better line this game.

The Canes had the puck in the Caps’ end with a battle along the far boards. Jake Gardiner jumped into the fray and stayed in the log jam a little too long so when he puck scooted out, speedster Nic Dowd picked it up with a teammate on his left but only Brett Pesce on defense. Pesce made a good attempt by sliding at the right time but Dowd, using Garnet Hathaway as a decoy, got the Caps’ first goal off the far post to cut the Canes’ two goal lead back to one.

Just over a minute and a half later, Foegs intercepted a Cap pass in the Canes’ end and used his speed to carry the puck up ice. Big guy Dougie Hamilton joined the rush for a partial 2-on-1 break which Foegs looking to Holtby but passing left to Hamilton who put home a slap shot for his 13th of the season.

With Staal in the box for a weak kneeing call, Ovi scored on his 246th career powerplay goal, of which it seems 100 have been against the Canes. Ovi connected on a one timer in “his office,” which is about eight feet above the circle to the right of the goalie, off a pass from Dmitry Orlov. With Joel Edmundson in the box for tripping, Haydn Fleury made a nice steal deep in the Canes’ end. Jordan Martinook, rather than clear the puck deep, carried it out to waste more time. The defensive play turned to an opportunity when Marty saw Foegs joined on the left wing. Marty centered a pass that Foegs deflected towards the goal but with Holtby not getting control, Foegs went into hack and whack mode as long as the whistle wasn’t blown, eventually knocking it in for his third shortie of the season.

Foegele was having a great night and only area he wasn’t in was the penalty box but quickly found himself there due to a trip early in the third. The Caps’ powerplay is very solid with fast passes with Evgeny Kuznetsov scoring off a quick pass from Nicklaus Backstrom, another possible future Hall of Famer. With the Canes squandering too many leads in the third for anyone’s liking, the Cane, and Caniacs, needed something to allow breathing room. The Canes’ third line, which had an excellent game came through with DZ winning another battle passing to Eric Haula who went right down Broadway for a shot that Holtby blocked but Martin Necas picked up the rebound went around a defender, faked left then tucked one in off his backhand for a pretty goal jus a minute and twenty seconds after the Caps’ goal.

Down by two, the Caps pulled Holtby with just over four minutes left. Ovi had the puck along the near boards but Foegs tied him up along the boards with Andrei Svechnikov picking up the puck, skating at half speed and with a smile put the puck in the empty net for the Canes first three-goal lead. The Canes got a like sloppy at the end and were called for an intention offsides resulting in a faceoff deep in their own zone.

After losing the faceoff, Richard Panik scored from the top of the high slot with just over a minute to go but that was the end of the scoring with the Canes ending their three-game skid, 6-4 of an important home stand. Last season at this time is when the Canes started their epic run that saw them go to the conference finals. They want and expect more of themselves this year, as do the Caniacs.

Next game is Tuesday, New Year’s Eve against Montreal, who the Canes had one of their most memorable New Year’s games against coming back from four goals down to win. Be There!