Cary, NC – For Cary’s 25th Kwanzaa Celebration, presented by the Ujima Group, Inc., Kwanzaa’s creator Maulana Karenga spoke to a packed crowd about the reasons he created the African heritage holiday and how to keep its values year-round.

The Origins of Kwanzaa

Karenga, now department chair for Africana Studies at California State University at Long Beach, spoke at the Cary Kwanzaa Celebration on Friday, December 27, 2019, for a standing room only crowd at the Cary Arts Center. Karenga created Kwanzaa in 1966 as a way for people of African descent around the world to celebrate not only African culture and history, but also to reflect on seven principles (Unity, Self-Determination, Collective Work and Responsibility, Cooperative Economics, Purpose, Creativity and Faith).

In the 1960s, Karenga formed the black nationalist group the US Organization, which was active primarily in California. Karenga was later arrested in 1971 for assault and false imprisonment, though Karenga has denied involvement. After his parole and release, Karenga created a new, restructured US Organization and earned two PhDs. Karenga also created the Kawaida Institute for Pan African Studies where he is the director.

Karenga said, for African-Americans, recognizing and celebrating their shared culture is a necessary component of overcoming historic oppression.

“In the 1960s, it was a struggle to free ourselves, and to be ourselves,” Karenga said. “We are always learning and exploring what it means to be African and to be human.”

Creating a forum to discuss this topic, of what it means to have African ancestry and the impact of the Trans-Atlantic slave trade, is one of the three key reasons Karenga said he created Kwanzaa. Another reason is, Karenga said, is African-Americans have been told they have to ignore or erase that identity to participate in the broader society.

“I wanted to reaffirm our roots in African culture, because that had been dragged out of us. We were a footnote in European culture and history,” Karenga said. “We don’t have to erase ourselves to be human, to get respect. We have internal worthiness, beyond all social and biological labels, beyond all hierarchies.”

Karenga also said conceptions of race and racial differences came out of the slave trade.

“Race is not real. People are real. It’s used to assign worth to humans, with Europeans as the standard,” Karenga said. “Racism is turning that hatred into public policy, legalizing your oppression. Anyone can have racial prejudice, but racism is the power to make it happen.”

And in discussing a way forward, Karenga said it is crucial to look for solutions from Africa and among African descendents.

“Africa cannot be a last thought, it must be our first thought,” Karenga said. “The oppressor can’t be our teacher.” 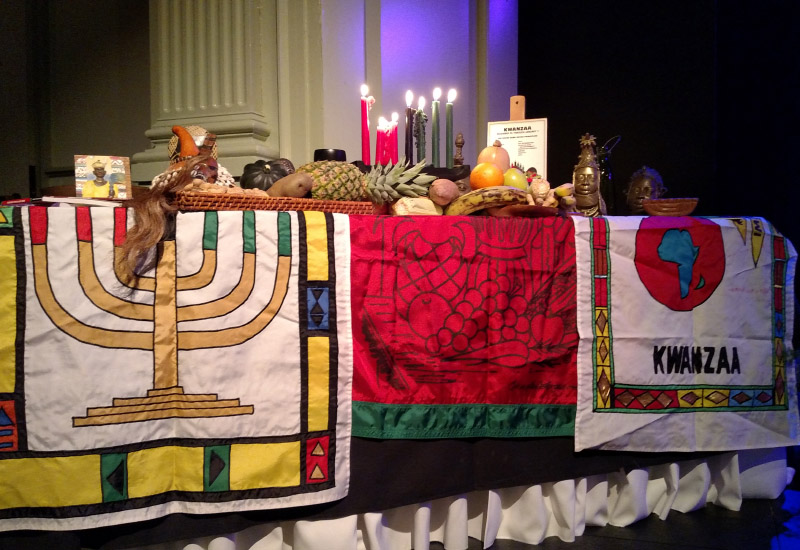 An example of a Kwanzaa display

Kwanzaa for All Seasons

The theme of this year’s Cary Kwanzaa Celebration is how to keep Kwanzaa year-round, which Karenga said means taking the seven principles to heart.

“It’s good to say ‘Umoja‘ (Unity) but how do you practice it in your daily life?” he said. “People can say ‘I love you,’ but it doesn’t mean anything if you don’t practice that.”

Karenga said another of the reasons he created Kwanzaa was to introduce these seven principles and create a “new value system” for how African descendants see themselves and relate to one another.

Karenga also said these principles need to be thought of in a broader context. For example, he said people should not only want self-determination for themselves and their communities but with embattled communities around the world, specifically citing Palestinians, Yemenis and Rohingya.

“We are a world-historical people, we must have a world historical consciousness,” he said.

Karenga also urged people to seek out the best in their societies, including respecting elders and ancestors, seeing the good in things and having respect for the environment, the latter of which Karenga said is particularly important in the face of climate change.

“The world belongs to all of us, not just corporations,” he said. 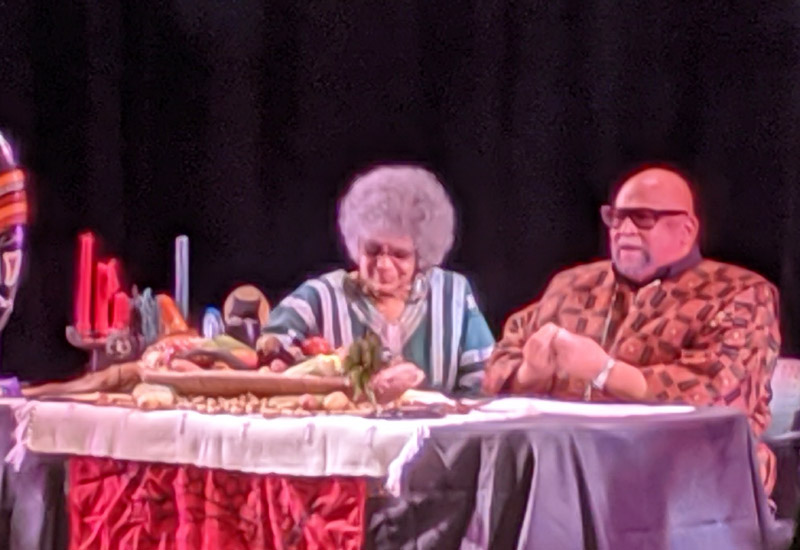 Maulana Karenga speaking at the Cary Arts Center, with his wife Tiamoyo Karenga