Cary, NC – It was exactly a year ago, New Year’s Eve, when the Canes beat the Flyers 3-1 to start their surge for the playoffs. The Canes are in a better league standing than they were last year at this time, but with the Metro division so tight and competitive, they’re hoping for as close a déjà vu as possible. If beating the Montreal Canadiens with the identical score of 3-1 is any indication of good things to follow, the Canes are on that train.

In front of the second sellout crowd in a row, the Canes had one of their best overall team games even though she score was low. The Canadiens are strong up front, with young talent like the Canes, but the Canes defense is stronger anchored by this season’s All Star Dougie Hamilton along with Jaccob Slavin and Brett Pesce. The latter two are the best kept secret in the NHL and only because they don’t pop in goals as often as the big guy, the both of them are absolutely stalwarts on defense.

Aho Bats in His 23rd

The Canes won the opening faceoff, but the first of too many turnovers led to Les Habs keeping the puck in the Canes’ end for the first 1:20. Just as Sebastian Aho was finally clearing the puck, he was tripped by Artturi Lehkonen at his own blue line for an early powerplay. The Canes’ first of just two powerplays all game looked good and had the positive result the sellout crowd was hoping for.

After passing up high between Andrei Svechnikov and Hamilton, Dougie passed low to Teuvo Teravainen along the half boards. Turbo passed to Eric Haula who on a set play, cradled the puck forehand to backhand going from the side to the front of the net for a stuff in. Charlie Lindgren, playing in goal for the first time this year, blocked the puck but kicked it high where Seabass knocked it in baseball style. After a video review for a possible high stick above the bar, as it was that close, the refs called it a good goal. Less than two minutes later, Max Domi pick-pocketed Turbo all too easily inside the circle to Petr Mrazek’s left, went to the mid slot and just slammed one in to tie the game.

Later in the period, the Canes got called for another questionable Too Many Men on the Ice infraction that had Haula and Jordan Staal making a plea about reversing the call to no avail. The Canes’ penalty kill continues to be very strong with Brock McGinn and Warren Foegele being aggressive up top forcing either bad passes or turnovers, neither got on the scoreboard this game but their efforts don’t go unnoticed by the Caniacs or coaches. Late in the period, Nino Niederreiter almost broke the tie after getting a slick pass from Lucas Wallmark. El Nino eluded his defender, sending a hard wrister off the crossbar. El Nino could have used that goal to help him break this mini slump he’s in but fortunately his overall play is still solid. 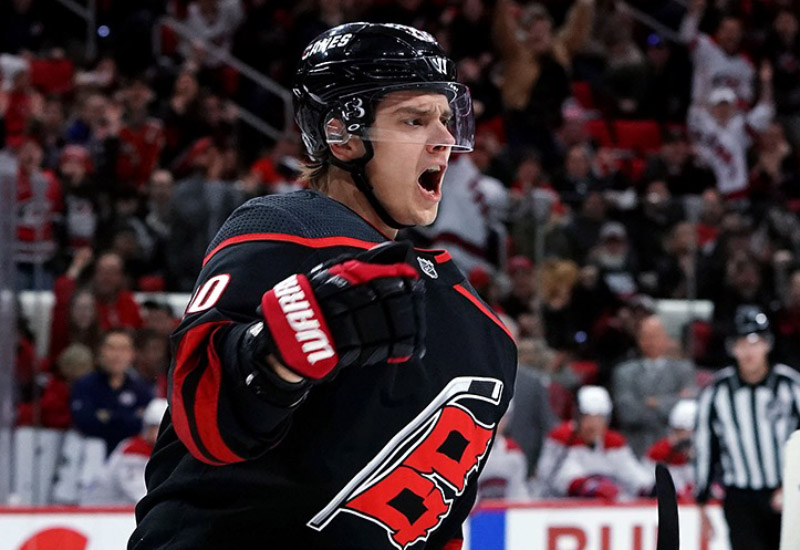 The Canes started strong in the second with Staal winning the initial draw, this time, the Canes didn’t turn the puck over and started a shooting barrage on Lindgren. Staal, Foegs and Svech each got off at least two shots during that first shift, which the Caniacs appreciated, even though none crossed the goal line. The Aho line forced a turnover, then started their own shooting barrage, but couldn’t penetrate the keeper. Not to be outdone, on an incomplete line change the third line partially got on the ice.

Turbo, on tired legs, made a pass to Pesce who joined the rush. Pesce’s decision to jump in the play was a wise one and made a fantastic pass through the crease, behind the defense right onto Haula’s tape who banged it home to continue his point streak since coming back from a knee injury. A noticeable change in the defense this game compared to a few recent games was making better decisions on when to join the rush or to stay home on defense. Haydn Fleury, who has alternated playing games with Trevor van Riemsdyk, while not making any scoring stat, had an excellent game.

With the game still being close, the checking seemed to get tighter by the minute. Whenever checking gets real tight, chipiness sets in and that started late in the second. The Canes rarely will start an altercation but will never back down from one either. Whenever players were sending Happy New Year messages to opposing players, for some reason Joel Edmundson seem to join for his own message, quickly followed by the linesmen wishing everyone a safe New Year on their way to their respective benches.

The Canadiens had their strongest start in the third as they didn’t want to end the year on a three-game skid and fall further in the standings. Montreal fans are very unforgiving and the faithful in attendance were hoping for the best. Coach Rod Brind’Amour has really preached on holding a third period lead as that was a weakness in the past. While this was just a one-goal lead, normally a two-goal lead in the third has a strong possibility for a win. However this season throughout the league, there have been more leads entering the third that have resulted in losses for that team. An old coach saying on a one-goal lead is “next goal wins” and the last 15 minutes had that drama play out.

With the Staal line pressing, first Staal got off a shot, with Foegs slamming back a rebound off a defender. Svech dropped his shoulder to get around his defender to grab the puck and send it home. Lindgren made the glove save but his glove went over the goal line. Not sure what video review the refs or the brain trust in Toronto had but with the replay on the Huge Video Board, it certainly looked like a goal. Further drama ensued a few minutes later when the Habs were throwing everything they could at Mrazek.

After making three tough saves, finally one crossed the line but before the puck hit the net, Mrazek was chasing down the ref for goaltender interference. Roddy challenged the goal and video review clearly showed Mrazek was right: goal denied and the Canes retained the slim one goal lead. Late in the game Ryan Dzingel got called for a soft high stick on Jeff Petry at his own blue line. The Canadiens used the first half of the powerplay with a conventional 5-on-4 but pulled the keeper for the extra skater in the last minute. The Canes’ penalty kill was like a brick wall at the blue line thwarting every Montreal attempt to carry possession in the Canes’ zone. After the successful kill, DZ stayed on the ice, after Hamilton pass to Wallmark who put the puck in the corner, DZ picked it up and threaded the needle as a defender went in goal for an attempted block to close the scoring 3-1.

As the famous sports philosopher Yogi Berra once said, “Maybe this will be déjà vu all over again” as the Canes hope the magic they had starting with this year ending game is like what happened for the new year. Thanks to the Canes for the birthday wishes on the video board (but you had my age wrong – I’m not that old, yet).

Next game on this long homestand is Friday, January 3, 2020 against the Washington Capitals who want revenge for their loss to the Canes a week earlier. Be there!