Cary, NC – In this year’s annual economic forecast for the Cary Chamber of Commerce, there are a number of positive trends across the nation’s economy but some big unanswered questions, both domestic and abroad, still make the future uncertain. 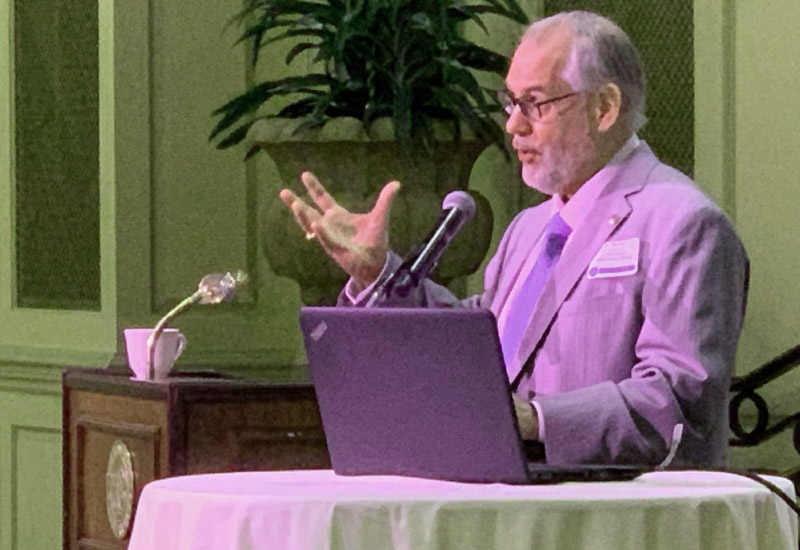 Michael Walden, William Neal Reynolds distinguished professor at North Carolina State University, gave his annual economic forecast to the Chamber at Prestonwood County Club on Friday, January 3, 2020. While Walden comes to make forecasts and predictions, he admitted up top that he is not always accurate, as at the start of last year he said the Federal Reserve would likely continue to raise interest rates, but instead in 2019 the Fed changed course and lowered rates.

“I can remember one other time they did this, in the mid-90s,” Walden said.

Walden said he wouldn’t expect interest rates to be lowered unless there was a weak economy or a recession looked like it was imminent, and he said that does not seem to be the case. He speculated the drop could be due to fears that the continued trade war between the United States and China could spark a recession or it could be increased pressure from President Donald Trump, as presidents typically want interest rates to be low and inflation is currently low across the country. 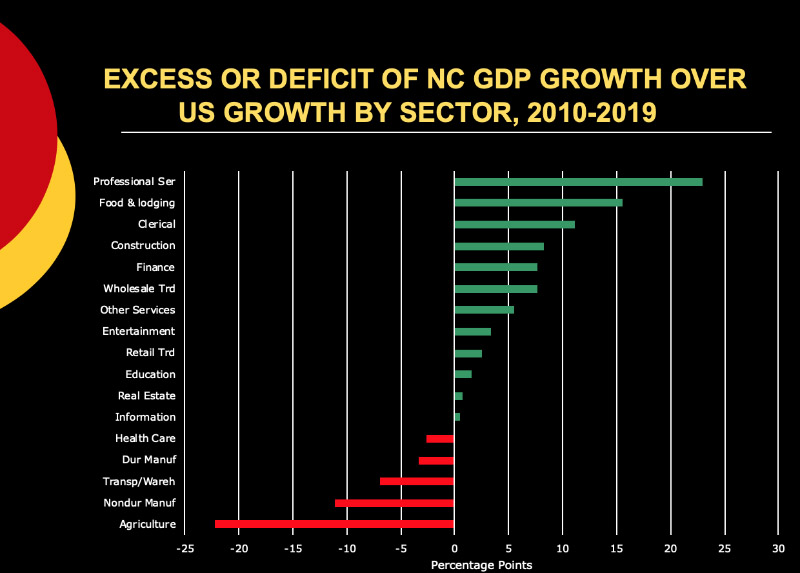 “The state GDP was hurt by the trade war,” Walden said. Additionally, job growth is faster in North Carolina than in the United States in general, but that has been mostly high-wage jobs and low-wage jobs, with mid-wage jobs shrinking.

One positive sign for North Carolina, Walden said, is the new trade agreement with Mexico and Canada, which he said will specifically help North Carolina’s dairy industry and the auto part manufacturing industry. Walden also said the previous agreement, the North American Free Trade Agreement (NAFTA) took a significant toll on the state.

“It wasn’t the only factor, but NAFTA helped the decline of our textile industry,” Walden said. 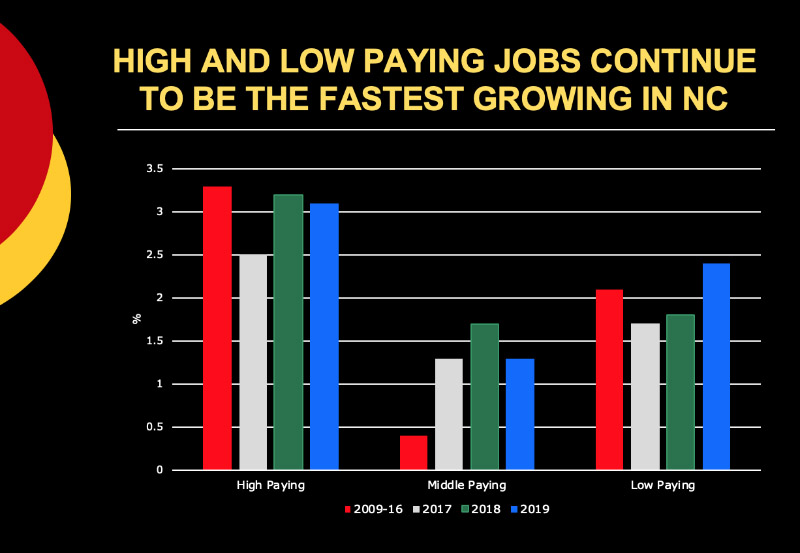 In the near future, Walden said North Carolina’s major cities will “do fine,” but there are many rural areas that will face problems, and Walden said it’s likely people will need to move to find jobs.

“We’re not going to see jobs go to these areas in this economy,” Walden said.

“It’s the best of both worlds,” he said.

Because unemployment is so low, Walden said employers are starting to face challenges finding new workers. He also said there are many people who are not in the labor force who could be. Some contributing factors are an increase in stay-at-home parents as well as the opioid crisis, which renders an estimated 2.4 million people unable to work.

But low unemployment has had some other positive effects across the economy. The number of part time workers are down, workers’ share of the GDP has expanded over the past two years and the largest percentage of wage increases have gone to low-wage workers.

“In the 42 years I’ve been doing this, that’s the first time I’ve seen this, except for a few temporary times,” he said. “It goes to prove the tightness in the work force.” 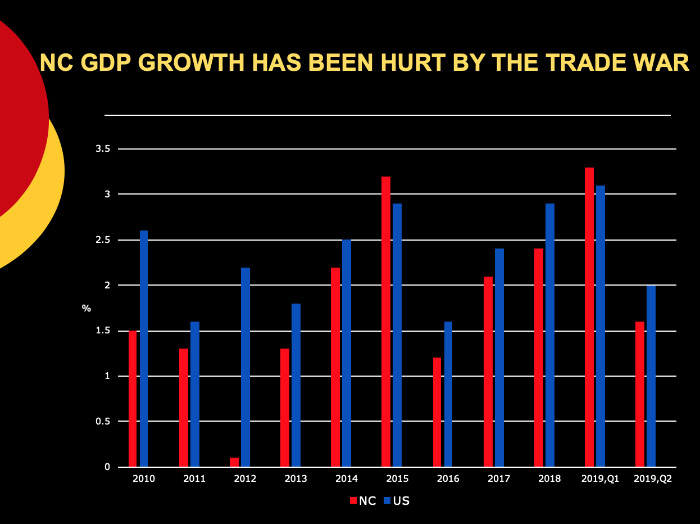 Also, Walden said more workers are now willing to consider changing jobs now, which had slowed down after the Great Recession.

Still, Walden said there are several unknowns on the horizon. While the stock market had been rising since 2009, it dropped steeply the day of his speech as a reaction to news of the United States killing a top Iranian general.

“It’s a good indication of how quick the market can change,” he said.

And when the stock market was rising, Walden said the share prices were outpacing earnings, which could indicate the market is overvalued. Also, the government’s ratio of debt interest payment to the GDP has been rising over the past few years, though it is still very low. 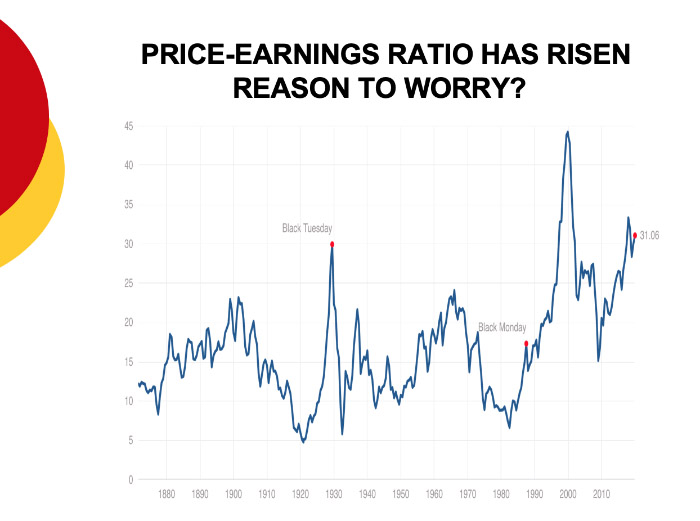 Walden said he tries not to make hard predictions anymore but he said there may be a 20 to 25 percent chance of a recession in the coming year.

One other project Walden is working on locally is the NC First Commission, set up to look for transportation solutions in the state. These include looking at mass transit, as well as a way to finance roads outside of the gasoline tax, such as more toll roads, a mileage tax or a tax on properties benefitting from transportation improvements. 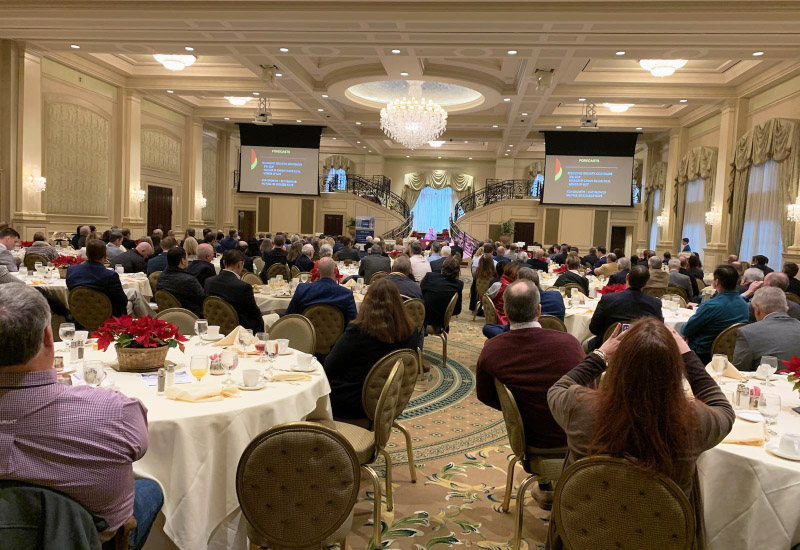