Cary, NC — Thursday’s regular meeting of the Cary Town Council was primarily focused on discussing the proposed annexation of properties on Roberts Road and Page Road to make way for the development of 99 townhome units. Other topics included the completion of the 311 system, the RDU quarry and further proposals to go to the planning and zoning board.

The council heard from five speakers in just under 20 minutes during Public Speaks Out. Three spoke to their differing views of the proposed annexation of properties located on Page Road and Roberts Road while the other two expressed their opposition to the proposed RDU rock quarry.

The first to the podium, Michelle Conlon, came to represent her community of Roberts Road, which she explained to be rural and made up of about 70 homes spread out on 300 acres of land.

“I want to urge you to not approve the proposal to build 99 townhomes within our community,” said Conlon. “It’s not that we object to townhomes, it’s that the townhomes are incompatible with the current land use.” In addition to the amount of townhomes proposed, Conlon expressed concern that there is a single entrance to the community and she would oppose connectivity efforts that could potentially come with the influx of traffic. 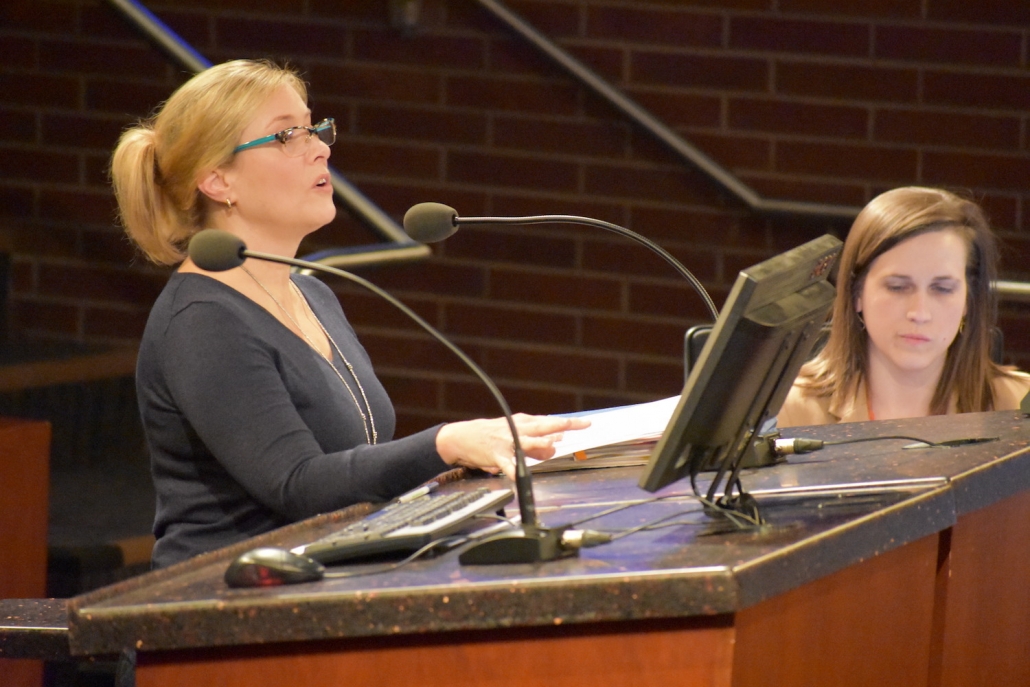 Michelle Conlon, a member of the Roberts Road community speaks her opposition to the annexation and rezoning up for a vote.

Responding to this concern during his time at the mic was real estate attorney Jason Barron who represents the applicant.

“There will be no physical connection at all possible between the Roberts Road development and Wood Forest Drive,” said Barron.

Making two other points, Barron shared that the eastern boundary of the proposed development would include a “significant riparian buffer,” creating a buffer in excess of 100 feet between this use and Wood Forest Drive.

Closing his statements, Barron informed the council that the Town of Apex recently approved a development just south and east of the proposed properties for annexation. The Apex townhomes will consist of 167 units at roughly 4.6 units to the acre.

“Whether the Town of Cary acts to approve townhomes on the Roberts Road site or not, townhomes are coming to this area. The character of this area will be changed whether Cary wants it to or not because Apex is located across the street,” said Barron. 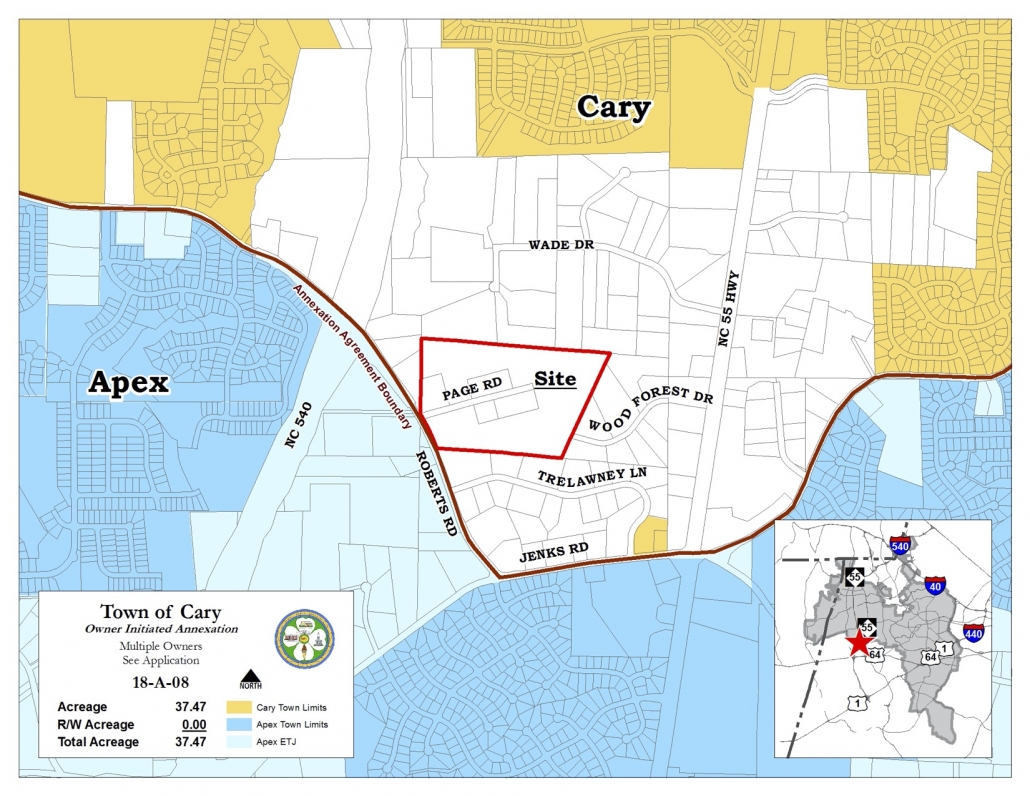 See the area on a map.

Last to chime in on the matter was one of the owners of the Page Road Property, Whitney Rich, who spoke to the wishes of his family.

Since his grandfather’s purchase of a 63 acre tract of land in 1943, 18 acres of that land were sold to a local developer for what is now the Page Wood Forest neighborhood. Since that time the remaining land has become what Rich called a donut hole, surrounded by successful developments which have caused a significant increase to their property taxes.

“We are constantly concerned about accumulating more and more debt on the property. We’re at the point where we need to sell the property so that we can meet our tax responsibilities and continue to build the legacy that my grandfather established in 1943,” said Rich. 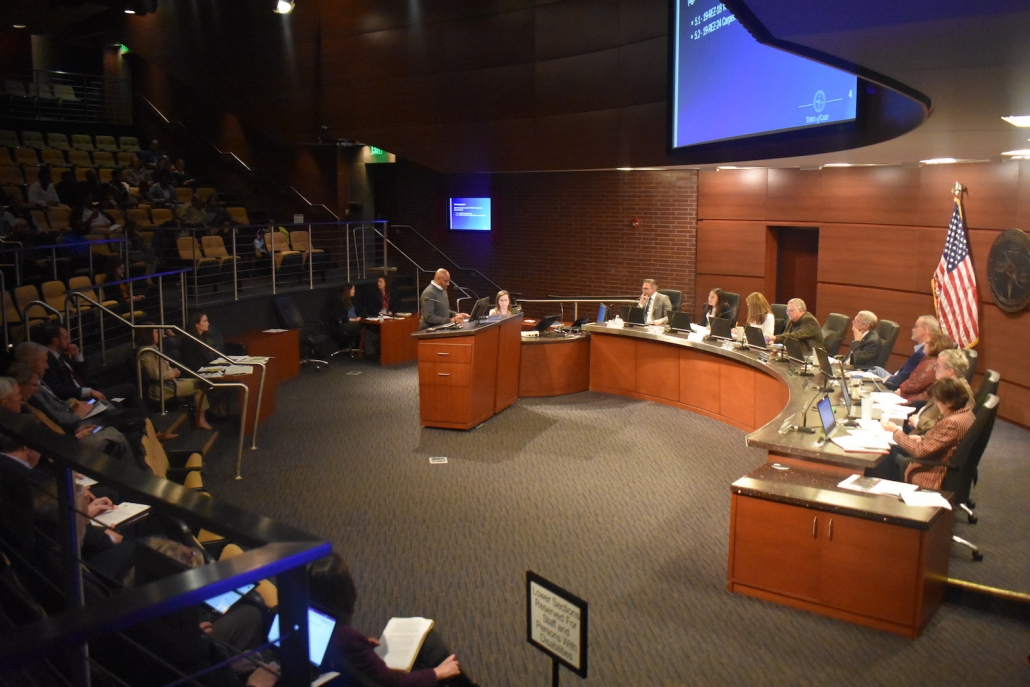 The council and attendees listen as Whitney Rich, an owner of the Page Road property speaks.

The issue in question is the plan by RDU Airport Authority to lease 105 acres of land to Wake Stone for a quarry.

“I’d like you to pass a resolution opposing the proposed quarry,” said Dr. Jean Spooner, chair of The Umstead Coalition.

Specifically wanting an amicus brief filed by the council, the coalition seeks to protect public lands from what would be “the first private rock mine on public property in North Carolina”. Spooner made the point that this is a Cary issue because it would impact the the greenway systems, the William B. Umstead State Park and in effect, Cary citizens.

In agreement with Spooner was Bryan Mohorn who presented three reasons to not support the quarry — the revenue numbers are not beneficial to Cary, there are already three quarries within 5 miles of RDU and the impacts to the environment.

Following Public Speaks Out, Councilwoman Jennifer Robinson spoke up about her initial concerns during the public hearing of the density and possible connection to another neighborhood.

“I think the density of 99 units on this is reasonable. I think there’s tremendous buffers around it and I think those who will live here will feel like they’re living in a pod and it’ll feel very much like an enclave,” said Robinson, who showed her support of the proposal’s improvements.

“When this first came to us in 2018 I was a definite no at that time because I certainly didn’t want to see all the newly generated traffic funnel through a quiet neighborhood street. That’s not going to happen now so I think we’ve got to look at it with the basic questions that we look at with every rezoning, is the use and density appropriate?” said councilman Ed Yerha.

Councilmember Don Frantz said he thinks it’s a mistake to not make a connection to create two points of entry and exit for the residents of the area. He sighted access and public safety as primary reasons for his concerns. “I can’t help but think sometime in the future somebody’s going to come back and want that connection because I think it’s the right thing to do.

Mayor Harold Weinbrecht chimed in to say that while he thinks it could post a safety issue with the one entrance, he does agree with the buffering and type of use.

“I’m not excited about townhomes in that area but across the street, you’ve got much more density than that. The area will remain rural as long as the property owners keep their properties,” said Weinbrecht.

The consensus of the board was that many did not love the idea of the townhomes coming to that area, especially in the initial stages. However, the council ended up in unanimous agreement that the annexation would proceed.

According to Town Manager Sean Stegall, the project to establish a 311 center is the completion of a key goal set by the council years ago.

“Cary is the first 3-1-1 system in the Triangle. I am so proud of what the team has been able to accomplish and you won’t believe how far we will have come a year from now,” said Stegall.

Popular in many cities across the country, 311 is a non-emergency phone number for citizens to call to find information about services, make complaints, or report problems like graffiti or road damage.

Stegall continued in his manager’s report to say that it’s the only telephone number people need for the Town of Cary and that the only email needed to reach the town is 311@townofcary.org.

Summing up the new system and its purpose Stegall said:

In one unanimous vote, the council approved the consent agenda, effectively giving a green light to the following:

During the public hearing session, two proposed rezoning requests were presented to the council and both were approved to go to a public hearing and to be deliberated by the Planning and Zoning Board. Based on these requests’ consistency with the Imagine Cary Community Plan, the board will provide the council with their written determination.

The first proposed rezoning request is called the Young Property and consists of 91.93 acres on Morrisville Parkway. The proposal would allow a maximum of 190 detached dwellings and commits to the preservation of a historic house. The applicant, in this case, has submitted a concept plan that illustrates buffers, development areas, circulation and open space.

The second rezoning request is to amend a portion of the previously approved Carpenter Village Planned Development District. This amendment is to specify a maximum building height of 42 for townhouse units within the PDD parcels. 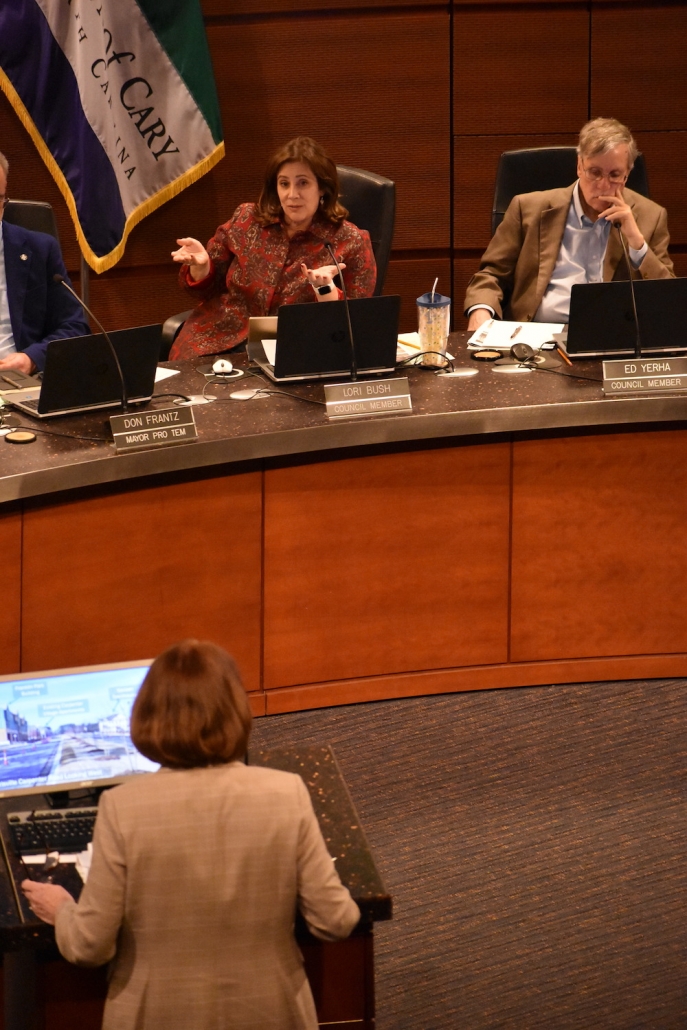 The board went into closed session for just under 30 minutes before its 8:15 PM adjournment with no business taken during that time.

Story and photos by Ashley Kairis.