Cary, NC – Starting on Thursday, September 19, 2019, the North Carolina Superior Court will start hearing arguments in the lawsuit between the Raleigh-Durham International Airport Authority and groups and individuals opposed to a plan to lease 105.5 acres of land next to Umstead State Park to use as a quarry.

In March 2019, the RDU Airport Authority voted unanimously, with one recusal, to lease the 105.5 acres of the Odd Fellows tract northwest of Old Reedy Creek Road to Wake Stone Corp. for use as a quarry. Wake Stone Corp. currently has a quarry adjacent to this parcel. 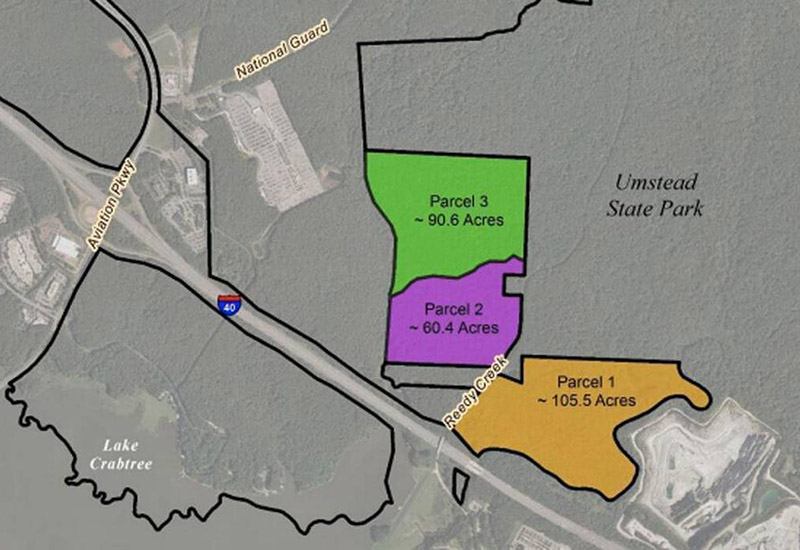 Several groups and individuals joined together in a lawsuit against the RDU Airport Authority, including the Umstead Coalition and Triangle Off-Road Cyclists. Superior Court Judge Paul Ridgeway issued a restriction on mining here until arguments start and he hears the case. The RDU Airport Authority has requested for this case to be dismissed.

Jean Spooner, chair of the Umstead Coalition, said their lawsuit is based on three primary points – firstly that RDU does not have the authority to lease mineral rights.

Spooner also said their legal team has “strong evidence” the RDU Airport Authority used Federal Aviation Administration (FAA) grants for land acquisition, which she said would mean the local governments have a say in how the land is used.

RDU has created a webpage to respond to criticisms of the quarry proposal and said “a sale that creates or expands a state park would jeopardize federal grant funding and is prohibited by the FAA.”

Additionally, RDU has included this quarry proposal in its “Vision 2040 Master Plan” and has held public hearings and meetings, saying they have gone through appropriate steps and made changes based on input.

“RDU’s owning bodies are represented by the members they appoint to the Airport Authority’s Board of Directors. Each owning body – Durham County, the City of Durham, the City of Raleigh and Wake County – appoints two members to the Board. The Board voted unanimously in favor of the land-lease agreement with one recusal. RDU also consulted with the FAA, which determined that the land-lease could go forward without federal approval,” their website reads.

For Spooner and the Umstead Coalition, their preferred outcome would be to sell the Odd Fellows tract to a conservation fund and said local governments could push for a declaratory judgment to assert rights as property owners.

For the RDU Airport Authority, there is currently a critical need for funds, as between $1.1 and 1.8 billion in infrastructure and capital projects that are not yet funded. This lease, according to RDU, will bring in $20.4 million, in addition to $3.6 million for a mountain biking lease in the 286 tracts and $3 million to reclaim and restore the site after their lease is completed.

“Wake Stone has operated a quarry next to Umstead State Park in compliance with environmental regulations since 1982, and buffers will separate the quarry expansion from state property, similar to the adjacent existing Wake Stone operation. Wake Stone must obtain all required federal, state and environmental permits for the project to proceed and is prohibited from using Reedy Creek Road to haul stone,” the RDU website reads. “The land-lease agreement includes $3 million to reclaim the site at the end of the term lease, which will include recreational features and a gravel parking lot for additional access to Umstead State Park.”

“The Town of Cary is most detrimentally affected of any municipality,” Spooner said.

Spooner also said the trucks that will need to haul trees and dirt from this site will go through Cary and will put pressures on already heavily trafficked Cary roads, including Reedy Creek Road.

The Regional Transportation Alliance has also recently created a task force to “explore expense and revenue options for Raleigh-Durham International Airport in response to accelerated growth and capital funding needs at RDU.”

Cary’s Heritage: Teachers of the Deaf
Scroll to top