Raleigh, NC — Justin Williams scored two goals in just his second game this season as he led the way for the Hurricanes to beat the Winnipeg Jets 4-1 before the All-Star and vacation breaks.

The Jets top line is as strong as they come — with size, balanced high scoring and grit. Petr Mrazek was solid in goal, allowing only one goal with the defense playing strong in front of him. Three-time Canes coach Paul Maurice has now been the bench boss of the Jets for 7 seasons and with the Jets moms on the road trip with the team, I’m sure Maurice had them eat at one of his favorite local restaurants the night before.

With Williams now on the team, it’s always interesting to see who is the odd man out during warmups. Erik Haula was that player this game and the guess is his knee is still not 100%. The Jordan Staal line started with Staal winning the first of many faceoffs and the Canes immediately started pressure on Connor Hellebuyck.

Andrei Svechnikov got the first shot at the goal but his wrister went wide. As their shift ended, the Sebastian Aho line took the ice and kept the attack in the Jets’ end. Warren Foegele continued the excellent play he’s been having lately using his best asset, his speed, to rag the Jets’ defense that many times resulted in a turnover.

The Jets had the puck in the Canes zone when the third lines were on the ice. Haydn Fleury cleared the puck to Ryan Dzingel in the neutral zone who saw Martin Necas speeding down the right wing. DZ made a great lead pass that Necas got on the fly, kept the speed, lowered his left shoulder and made a power move to the goal going forehand, backhand fooling Hellebuyck so much he had 5’ of open net to score the game’s first goal at the 2:28 mark. Necas’ hard play drew the first penalty as he got hooked by rookie Sami Niku, which had Maurice giving that famous stare all players hated as they knew what was coming next. 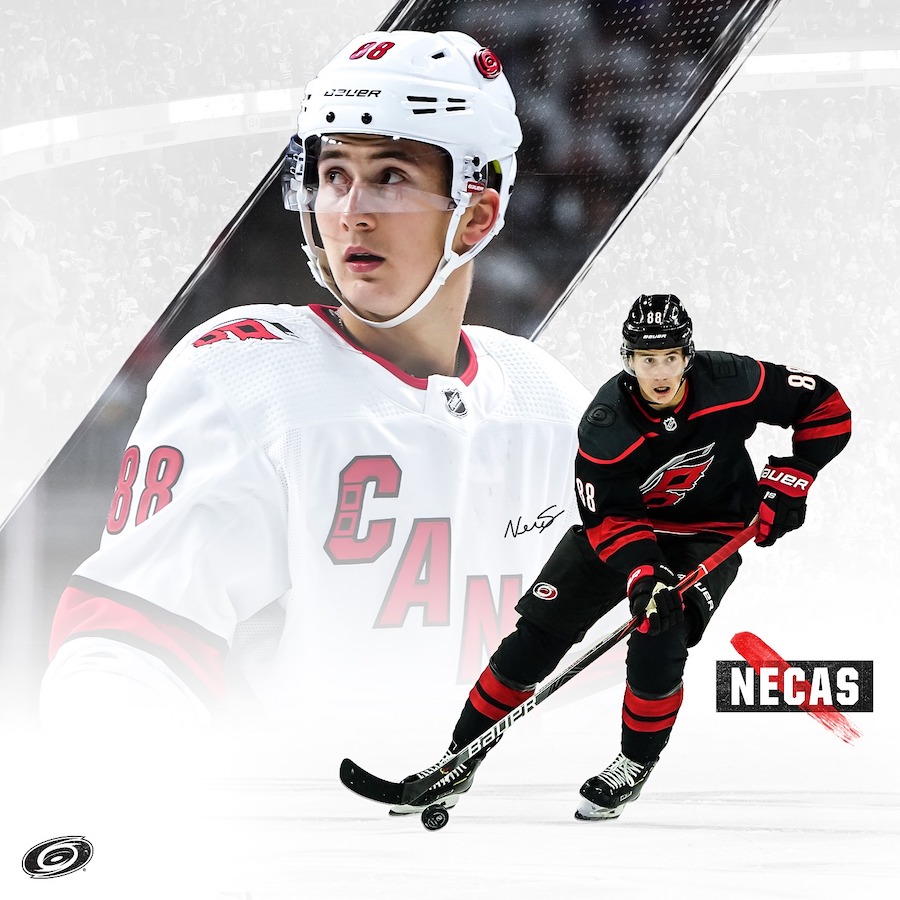 The Canes powerplay was 3rd in the NHL in early January. With their recent 0-18, they entered the game dead last. The O-fer was about to change when Jaccob Slavin passed over to Teuvo Teravainen on the left point. Turbo took a couple of strides, scanned the landscape and made a hard pass to Willie camped out in the dirty area who tipped the puck up high to break the goalless powerplay streak for his first goal on his first powerplay of the year.

Patrick Laine, a good friend of Seabass, cut the lead when he flat out beat Nino Niederreiter on what appeared to be confusion on who was covering whom by the Canes leaving the big Finn alone coming down the slot and easily beat Mrazek on the Jets first shot of the game. Kyle Connor is an impressive player as he’s very fast, has excellent stickhandling and plays greasy, meaning he’s tough to cover. In the middle of a line change, Willie found himself covering Connor and realized he needed to quickly make the full line change complete.

With Foegs in the box for a game delay, the penalty kill units continued their strong defense. Brock McGinn seems to excel in the PK situations and at one point the Canes looked like they had the man advantage as they were the team getting shots off. Ginner was in the dirty area providing a screen when he was cross-checked in the chops, sure of a call to even the playing field but no whistle was blown. Must have been that unwritten rule: no blood, no foul.

Slavin made the save of the game a minute later when as the lone defender on a 2-on-1, he timed his laying down perfectly between Connor and Laine to block the pass for what could have been a sure goal. Late in the period, Svech was just inside the Canes blue line flipping the puck within inches of the big scoreboard. Seabass used his long stick to gather the puck before the defense and went down the right side with a backhand shot that hit the side of the net then to the boards. Seabass kept his speed, retrieved the puck and laid a pretty pass to Teuvo charging down the left side of the slot who buried it high for a 3-1 Canes lead.

Early in the second, another bad line change by the Canes allowed Jack Roslovic to go in on Mrazek all alone. He had all the time he wanted but Mrazek gave him nothing as he came out cutting down the angles and made a great save getting the Caniacs first of 3 calls of “Petr, Petr, Petr”!

Play was starting to get chippy on both sides and it was DZ who got the next penalty for holding. Foegs was outstanding on the PK just forechecking in the Jets end, thwarting 3 consecutive attempts by the Jets to start a play. The aggressive PK led to Matthew Perrault tripping Ginner with just 3 seconds on the Jets powerplay.

The Canes powerplay units were a bit disorganized this time around and couldn’t get any shots off. Later in the period, each team got another shot at powerplays with both penalty kill units doing their jobs.

Willie Nets His Second Of the Game 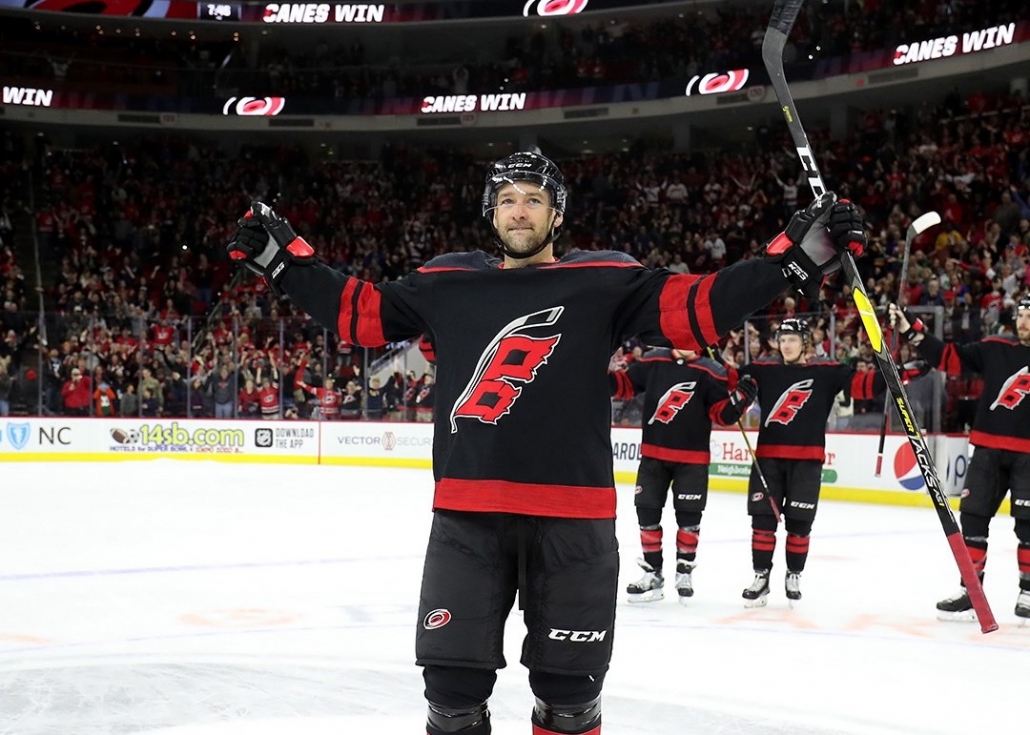 Jets Captain Mark Scheifele single handily tried to light a fire under his team. He played with an edge no matter who he came into contact with. Mason Appleton got Scheifele’s message and got a little too aggressive as he tripped Willie. Just 3 seconds after the penalty ended, Teuvo passed over to Svech along the near boards. Svech carried the puck along the boards, threaded the needle with an incredible hard pass to the front of the net between the goalie and a defender. The puck went to Willie’s stick for an easy tip in to close the scoring.

Shortly after that goal, with the Canes attacking again after a shot that Hellebuyck blocked, Svech kept poking, as he should as no whistle was blown. But, Scheifele took exception and the two got called for roughing. Late in the period, Maurice pulled the goalie for an extra skater. With the play around Mrazek, he extended his stick that hit Scheifele’s skate so he crosscheck Brett Pesce from behind. The usually soft-spoken, big stick Pesce, turned and defended himself and his keeper with a solid battle with the Jets captain.

The Storm Surge was an old fashion game of dodge ball on ice with the players really seeming to enjoy it as much as the Caniacs. The next game is January 31 against the Vegas Golden Knights. Be there!