This quote comes from the author of Zero Waste Home: The Ultimate Guide to Simplifying Your Life, Bea Johnson. It’s more than just words to Leigh Williams and Dargan Gilmore, the co-founders of Toward Zero Waste, an NC non-profit organization based in Cary working a step at a time to help the community reduce their waste. 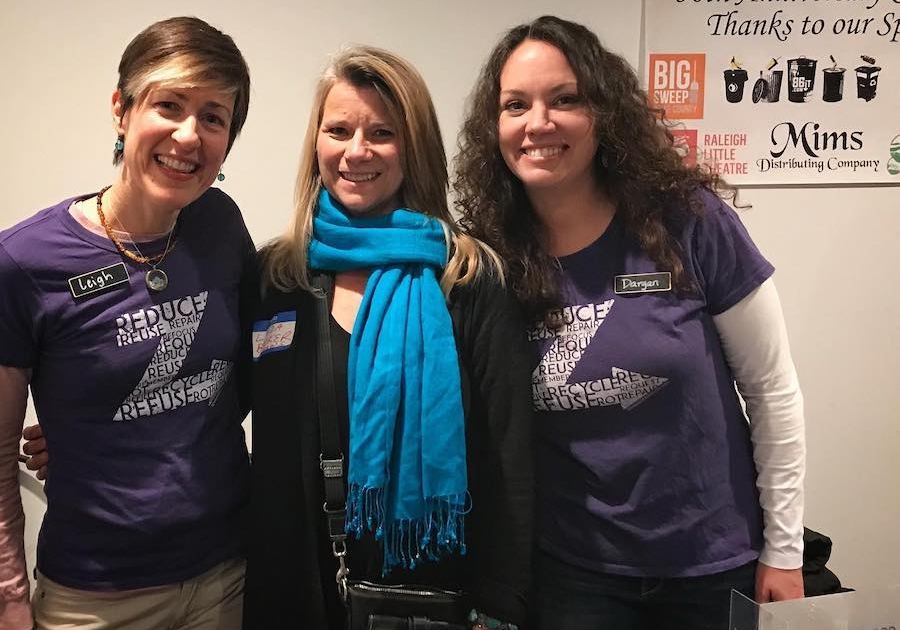 “That book was the inspiration, absolutely, because before that I never knew it was possible. I knew I was bothered by how much waste I saw and how much waste I made and that you couldn’t buy anything at the store without making trash, but I didn’t know there was anything to do about it,” said Williams.

The other co-founder, Gilmore, met Williams on an international Facebook page called Journey to Zero Waste after posting in a comment that she was living, at the time, in Raleigh, NC. The two triangle-based mothers decided to join forces and start up an organization dedicated to education, awareness and change.

Now, four years later, both are living in Cary and working to grow TZW, which just became a fully-accredited non-profit in the last two weeks. The organization can be viewed as an umbrella. Toward Zero Waste is the state-wide organization and under the span of the umbrella, TZW has created 18 local community groups throughout North Carolina as platforms for people to meet, ask questions and host events.

“The reason behind that is that each municipality recycles very differently. We wanted to keep it uber-local because being environmentally friendly is a very local thing,” said Williams.

Why “TOWARD” Zero Waste

The first word of the organization is an important one. It’s a word that gives room for some error along the journey.

“When you read about people who are “zero-waste” you often read about them having a pint-jar of trash in a year. That’s just overwhelming and not really doable for most of us. So, we emphasize baby steps because it’s about habit building and picking one thing and getting better at that,” said Williams.

Both Williams and Gilmore, as they spread the message of TZW, communicate that it’s all about becoming more mindful and intentional, and no one should be too hard on themselves when they accidentally create waste. Part of taking on a waste-reducing lifestyle is creating new routines. This might mean that you forgot your reusable bags in the car and you realize it at the checkout counter. It might mean that you want to start bringing your own reusable drinking and food containers and even cutlery to cut down on one-use plastics. It takes time to establish this new normal.

“You have to figure out what works for you and it’s about not beating yourself up when you don’t do it right. Part of what I learned in the last year is it’s about the big picture and the impact that we’re having on other people to become more mindful,” said Williams.

Summing up the reason why “Toward” was a must in the title is this quote that Gilmore and Williams identified strongly with.

Can One Person Really Make a Difference? 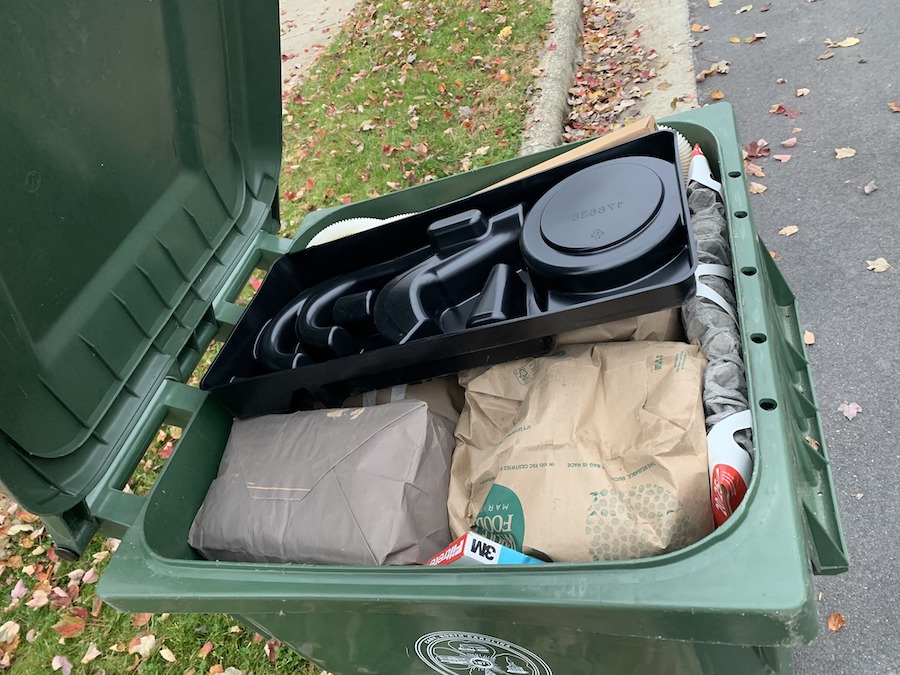 This is the trash bin of co-founder Leigh Williams, who went nearly all of 2019 without the need for a trash pick-up until November 27.

Along the way, the TZW organization has had its fair share of nay-sayers. Some don’t believe it can be done in their lives while others say there’s no point because just one person’s waste being reduced doesn’t make a big enough impact to see any substantial change. With many discussions in the environmental world swirling around the topics of governmental and large social changes, the question becomes: why try going for smaller, personal changes.

Williams says she believes, “It takes a lot of personal change in people to push the bigger changes. So I push back when people say what I do doesn’t matter because I’m just one person because honestly, I’m building a community around me where people look at what I do and it makes a difference.”

What has mattered for Williams most since her personal journey began less than five years ago is aligning her values with her action. “It’s a practice what you preach kind of thing,” she said.

Williams acknowledges that being in the United States and trying to reduce waste is difficult. It goes against the grain of our convenience-based society. “It’s really hard, but I think everybody can make a little impact even if it’s just that you stop getting a throw-away cup when you get Starbucks every day,” said Williams. 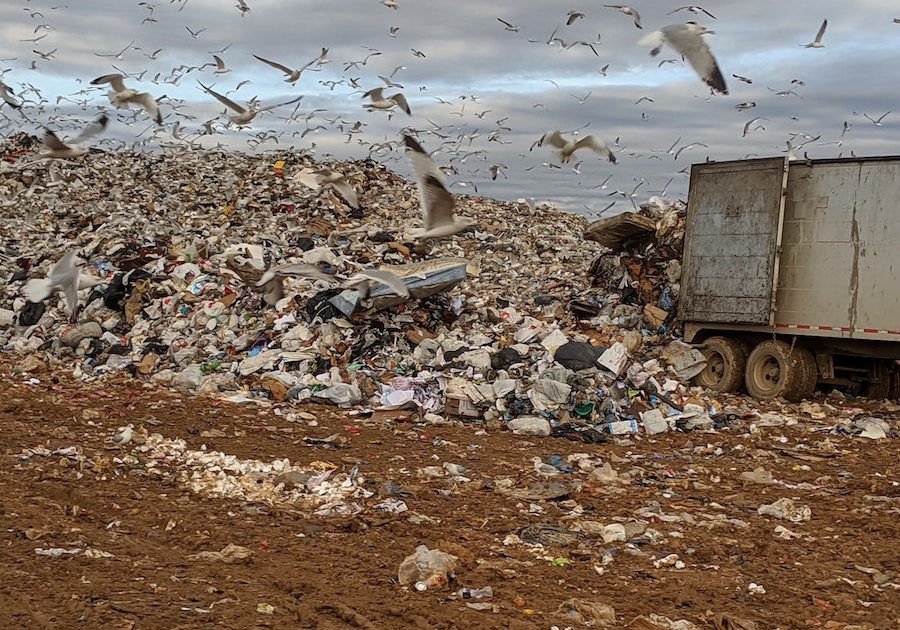 Seagulls migrate to the South Wake Landfill each year, attracted to the tons of compostable food waste .

What is the current situation on waste right here in Cary and the rest of Wake County? The newest data comes from a 2019 study conducted by Wake County’s Solid Waste Management Division. A few stand out figures include:

In response to these numbers, Williams says the organization would love to see curbside compost come to Cary.

“We all need to be composting because that’s a big part of the answer, not only to the waste problem that we’re having, but it’s also a climate change issue,” said Williams, mentioning the problems of methane and displaced carbon around the world. “I wasn’t really thinking about climate at all four years ago and through learning so much about compost, it’s really made a difference in the way I look at the world.”

While there is no curbside compost in the works for Cary yet, Town Council member Ya Liu said in an interview with TZW that she would support a curbside compost program. Liu said, “I think our residents would really want to get involved with composting but some don’t know how, so if our town can provide the vehicle then that makes it easier for people to get involved in this and that would be terrific.”

The town is making strides first with recycling. Mayor Harold Weinbrecht announced last week that curbside textile pickups will be coming soon, in addition to recycling bins, to help eliminate the waste of recyclable textiles to the landfill.

Cary’s Sustainability Manager, Emily Barrett says, “We all benefit from extending the life of the landfill as much as possible.”

“I think Toward Zero Waste is an important community group,” said Barrett. “Leigh and Dargan have always been very clear on their approach—they want to work with the community to create a conversation about ways that each person can make a difference in shifting away from a throw-away culture.”

“Their mission of helping residents move towards a zero-waste lifestyle, by making small changes over time works. When I talk to residents about waste reduction, the first thing I say is “some of the tips I’m going to share with you are not going to suit every lifestyle and that’s okay, but if just one tip resonates, then to me it’s a step in the right direction,” said Davarbakhsh.

Future of Toward Zero Waste 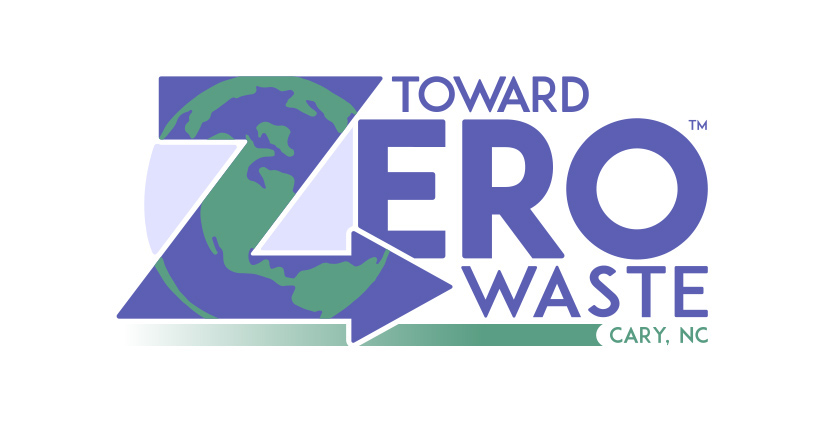 While the organization already was sponsoring litter sweeps, monthly meet-ups, teaching classes and coordinating landfill and recycling facility tours, Williams was eager to see even more growth. Having healthy numbers on their Facebook community pages was great, but about six months ago it was time to take another step — Cary Impact meetings.

In a full-circle kind of way, this gives more and more people the chance to follow the lead of Williams in aligning their values with their actions.

“We had our first Cary Impact Meeting about six months ago and it’s about bringing people together who really want to take the next step in developing a zero-waste mindset in our community,” said Williams.

One of the ways this group wants to make an impact in Cary is through the creation of a restaurant rating system based on the establishment’s environmental friendliness from their waste levels and composting practices to offering recyclable to-go products.

Learn more about the future of the organization and upcoming events. If you’re inspired to reduce your waste, join the Cary community page and check out the local zero-waste shopping guides for Cary, Apex and Raleigh.