Cary, NC — The Cary Town Council met for its second regular meeting of the year Thursday night with about 50 in attendance. The main topic of discussion was a series of amendments brought forward as a presentation to the council to make all future townhome streets and alleys publicly owned and maintained.

As they presented, these are necessary changes to make all future townhome streets and alleys publicly owned and maintained.

The technical changes brought to the council were to improve:

The council did not take action on the amendments at the meeting, but several did voice their appreciation for the work put into them.

“I just want to thank the staff members. This has been a complex problem that’s plagued all of us since we’ve been on the council so it’s impressive to find out that there are 24 people who have dug deep on this and came about with an empathetic and collaborative and trusting manner,” said Councilwoman Jennifer Robinson.

Mayor Weinbrecht agreed that it’s a good solution. “I know that from a citizen’s point of view, this is going to be appealing as well.” 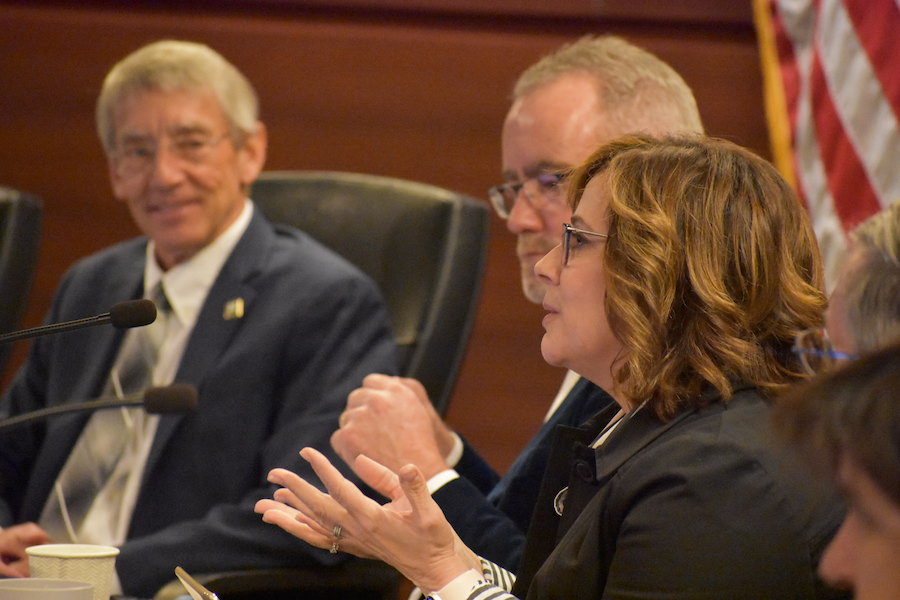 Councilwoman Bush shared a story that one of her first phone calls from a citizen following her election to the council was after a snowfall. The woman wondered why all other streets were plowed instead of hers.

In this particular case, it was a townhome street and it was private.

“It just hadn’t occurred to me the length of time it takes from having these discussions at the table that we don’t want any more private roads to actually this amazing, adaptive proposal,” said Bush, who said the work of the staff on it was remarkable.

“I just love my job so much and I just feel such immense pride. I’m just so proud of you. It really is overwhelming,” said Stegall.

Two speakers came forward to voice their support of the amendments, each speaking from a developer’s point of view.

One woman representing M/I Homes said, “This adds a degree of certainty to the process and that makes it smoother and more predictable for everyone involved.”

The second speaker, Ed Tang, said, “I’m here to lend my support to the recommendations that the staff presented. I think what we have tonight is a great start of a very balanced approach.”

The amendments will go to the planning and zoning board next for review and future recommendation before being returned to the council at a later date.

Before voting to approve the evening’s agenda, an item was removed due to a withdrawn petition. The applicant had previously requested the approval of rezoning 0.28 acres, located at 107 W. Park Street, from Town Center – General Commercial Conditional Use to Town Center High-Intensity Mixed-Use.

The applicant, in addition to withdrawing the petition to the board, asked for a waiver of the one-year waiting period.

Mayor Harold Weinbrecht said, “This is not actually a bad thing and a lot of times it is a good thing. It means the applicant wants to make a change and changes are made usually for the better.”

The motion to remove the public hearing from the agenda and to waive the one-year waiting period carried unanimously.

Two people came forward to the mic during public speaks out. The first, George McDowell, brought concerns about the environmental impacts of coal-burning companies and the production of coal. The second, Alasdair McGreggor, came to discuss his views on the proposed development, still in the planning stage, at the corner of Mount Pisgah Church Road and New Hope Church Road. While not on the agenda for last night’s meeting, McGreggor said the planning has been in the works for six months.

“The message I want to convey is that the development plans are moving in the wrong direction,” said McGreggor. 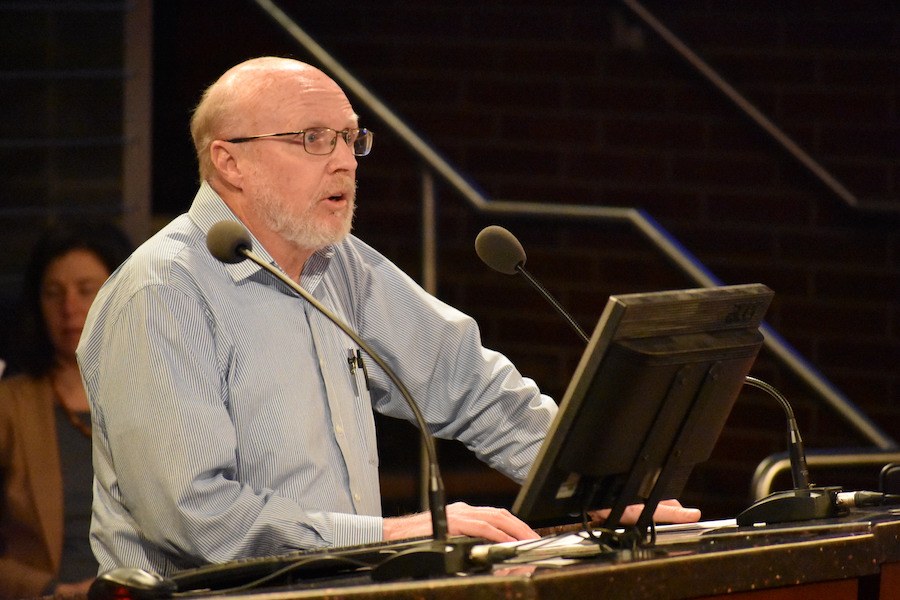 “The process of building the joint Cary Chatham County plan is long and I know arduous, however, it stands as a solid framework against which to measure ongoing and future growth decisions. To the dismay of residents in the neighborhood, towards the end of that process, an island of higher density roads in the midst of several established, very low-density residential neighborhoods.”

The island he is referring to is at the intersection of Mount Pisgah Church Road and New Hope Church Road which straddles the one-mile boundary from Jordan Lake.

According to McGreggor, not long after the Cary-Chatham County plan was approved, a development was proposed for the site and targeting the maximum allowable density and made no accommodation for the one-mile boundary, leading to the proposal’s withdrawal. Between August and November 2019 a revised plan was proposed for the same property.

“Relative to the original one, this application was more refined and appeared to be headed in a better direction,” said McGreggor.

“What was presented at the neighborhood meeting on January 8th was different,” sadi McGreggor. He said the presentation he heard included 165 lots, about 2 units per acre, no age restriction, multi-story and still 7,000 square foot lots.

Making his argument, he said this plan does not live up to the Cary Chatham County joint plan’s guidelines of no more than 1 dwelling per acre within one mile of Lake Jordan, to preserve rural character for the bulk of this area and protect property rates of residents and landowners.

“If the joint plan guiding principals still stand, then the direction that this development proposal is heading needs to change,” said McGregor.

The minutes of the last two regular meetings of the Town Council were approved along with the previously mentioned waiver of the one-year waiting period and the official petition withdrawal for the rezoning of 0.28 acres, located at 107 W. Park Street.

Additionally, the council approved the GoCary Title VI Program Update which requests the adoption of a resolution committing to “ensuring that no person is excluded from participation in, denied the benefits of or subjected to discrimination in any Town transit services on the basis of race, color or national origin.”

There was no discussion from the council on these items. 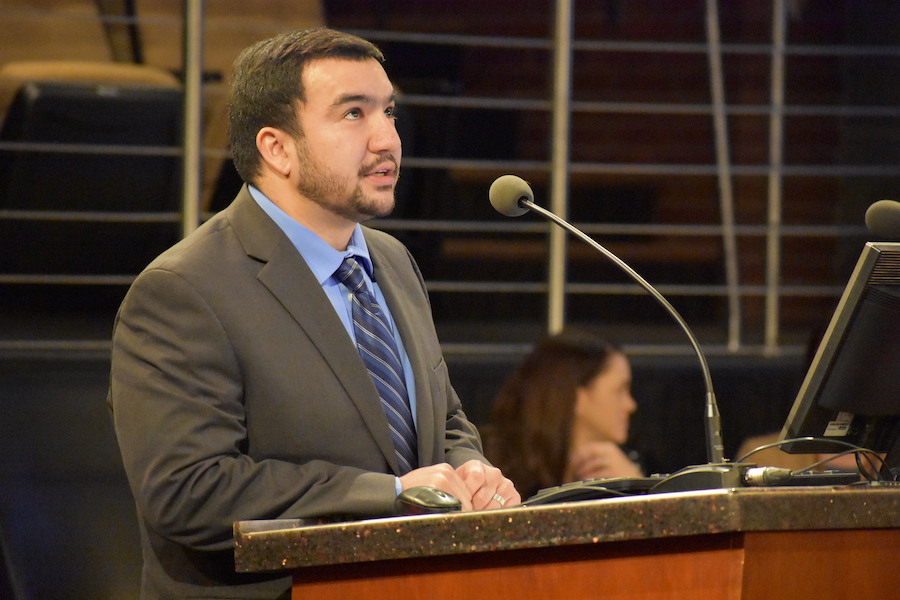 Speaker Amir Nezerati of the Transportation and Facilities Department came forward to present an overview of the plans for the street maintenance program. These plans are supported by the Shaping Cary’s Tomorrow Transportation Bonds as well as other various funding sources to total a budget of $7.7 million to be invested in street maintenance planning, design and construction in 2020.

Of this total budget amount, the recommendation from the Town of Cary staff was to award the bid for the construction to Blythe Construction, Inc. in the amount of just over $6.5 million.

Before the council moved to a vote, Weinbrecht made a comment.

“Not all streets in Cary are ours to maintain. A lot of our citizens don’t realize that.” He noted that several streets within Cary Town limits are state maintained and that there is a website for residents to search which streets are maintained by the state or the town.

Councilwoman Robinson also gave the feedback that she would like to see the construction company be aggressive in protecting people’s private property as they go about making improvements.

The bid was awarded by a unanimous vote of the Town Council.

A closed session was recommended by Councilwoman Lori Bush to instruct town staff concerning the position to be taken by the town in negotiating the price and material terms of the proposed contract for the acquisition of property owned by the Robertson family at 338 Ernest Jones Road in Apex. Also to consult with attorneys and to prevent the disclosure of confidential information.

The closed session lasted about 30 minutes before the council adjourned. View the full taping of the meeting.

Story and photos by Ashley Kairis.