Cary, NC — On Wednesday, Cary Mayor Harold Weinbrecht delivered his 2020 State of the Town Address to members of the Cary Chamber of Commerce in a packed ballroom at Prestonwood Country Club. He highlighted the accomplishments of 2019 and talked about what is planned for 2020 and the years ahead. 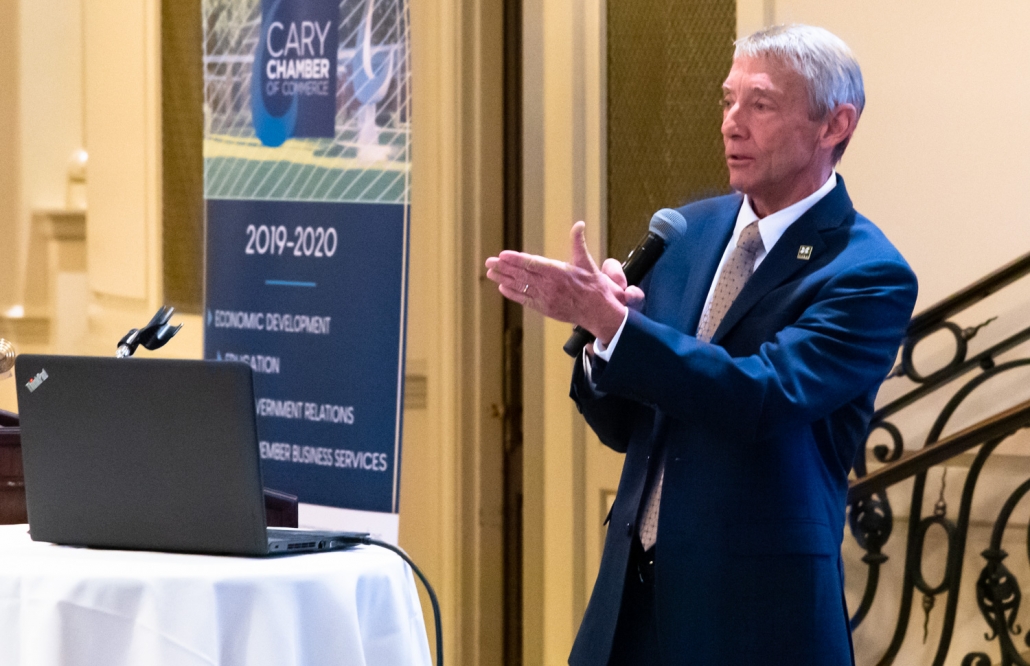 “I can tell you that a lot of things are changing,” Mayor Weinbrecht said, starting off his 13th State of the Town Address.  “With the passage of the parks and transportation bonds along with key developments in our downtown and in the eastern gateway, things are changing.” He continued, “We’re keeping Cary the way it is, the Cary we know and love. But at the same time, Cary is transforming and we are entering into a big transformation period.”

The Mayor began his address with some facts and figures about Cary:

Cary has been named, along with many other titles, the #1 Safest City in the United States, #4 Best City to Buy a Home and #1 Most Connected City in NC.

Weinbrecht says Cary is “financially sound as always,” with all triple-A bond rate and debt at 11%, under the 15% ceiling.

“Our revenues always exceed expenditures by a great deal. Last year it was a $17 million difference and that gives us great flexibility because we have a general fund balance now about $33 million over where we’re required to be by our standards, not the state’s standards.”

Where Cary is Going, Expected Growth 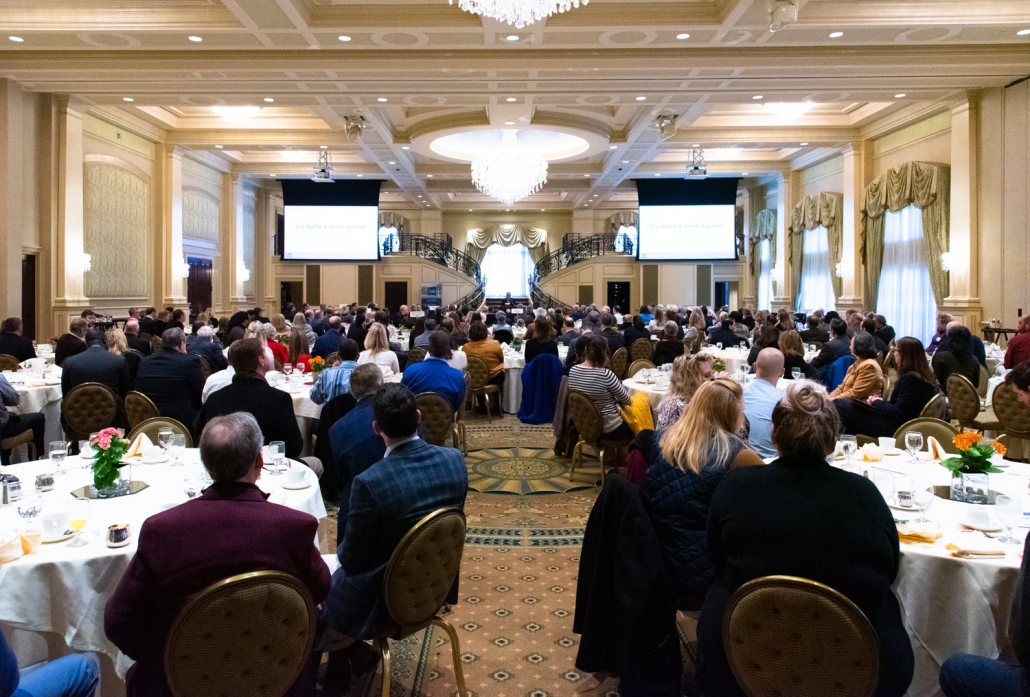 2020 is a year of rebranding for the Town of Cary and, as Weinbrecht described, it’s not just about creating a new logo.

“We’re doing it because we want to compete globally and that’s the way to do it. We need to have a solid message that talks about why we’re the place to be. You have to have a message that you’re ready to present to bring even more jobs here.”

The new logo and tagline are expected by the end of 2020.

Also new to Cary are measures to keep citizens connected and informed. This takes form in the 311 system that launched in early January and is the first of its kind in the Triangle. In the same vein is the MyCary app that is expected to see new enhancements this year.

“We’re very prioritized on our environment. We’re looking for ways to be a greener community and we have been for many years,” said Weinbrecht.

A few ways the town of Cary has started on this initiative are:

“About five years ago we were getting paid per ton for recycling and then it turned around to where we were paying per ton to recycle. Then it became hard to find someone to pay to do recycling. So we’re lucky to sign a two-year contract that gives us time to work on resolving this issue. One of the things we found out is the good news was we have 80% participation. The bad news was a lot of our waste can be recycled, so about half of that is food and half are recyclable materials and a good portion is also textiles.”

A total of $2 million in bonds has been set aside for the purposes of historical preservation in Cary and the town hired its first Historic Preservationist in 2019.

“One of the things we’re very focused on is preserving history. One of the great goals that we had and accomplished this last year was purchasing the Nancy Jones House, the oldest house in Cary built in 1803,” said Weinbrecht. The town’s plan moving forward is to preserve it and restore it.

Another project underway is the restoration and preservation of Hillcrest Cemetery.

The town is preparing for a year of celebrating in 2021 as that will be the town of Cary’s 150th year as an incorporated town. The Sesquicentennial events will take citizens back in time to pay homage to Frank Page, who was its first developer, mayor, postmaster and railroad agent. They will also provide a time to celebrate all that’s been accomplished in the last 150 years.

The kickoff event will be on New Year’s Eve and the larger celebration will be April 10, 2021 at Downtown Park.

Member of the Cary Town Council, Cary Chamber, Morrisville Chambers and NC Representatives from the General Assembly gathered to hear the updates from Mayor Harold Weinbrecht.

Before introducing the big developmental changes, Weinbrecht gave an overview of the plan that governs the town’s decisions on developing.

“Over 1,000 citizens spent years establishing a vision called the Cary Community Plan. We did a big ask last fall and we said to help us out, we need $225 million to help implement this plan and the Cary citizens overwhelmingly said yes, move forward, that’s what we need you to do. So now, with that vision, we do have things moving forward.”

The Eastern Gateway will be home to Cary’s largest project in history. The Fenton is a 90-acre site that will feature retail, office and residential spaces. They started breaking ground in August 2019 and are going to start building vertically this July. Phase one of the development will yield approximately 1 million sq. feet. Of that, 365,000 sq. feet will be for retail, 150,000 sq. feet will be for office and the remaining space will be for 354 multifamily residential units. The retail spaces are over 52% leased already to companies such as Wegman’s, Cru Wine Bar, M Sushi and Cinebistro. The first phase of their opening is expected to be near the end of 2021.

The park nestled just next to the downtown fountain and the library is entering into phase II, the designing phase.

Planned amenities for the park will include a canopy walk, gathering garden, Academy St. Plaza, lawn and pavilion, bark bar, children’s play area and farmers market. Also in this phase, there will be a storm water system that can handle a 500-year storm. Roughly 400 new trees will be planted in the park, increasing the canopy by 220%.

Construction is scheduled for Summer 2021 and the dedication would be two years later in Summer 2023.

The Mayor discussed a proposal to build a structure that wraps around the library and parking deck in the downtown area. The way Weinbrecht describes it, the structure will feature a breezeway that people traveling down Kildaire Farm Road can look through to see the Downtown Park. The front of the structure on Walnut Street would be an office building. The lowest level would feature retail shops and restaurants while the upper levels would be residential.

“That’s exciting — bringing retail and residential right there, in the heart of Cary,” said Weinbrecht.

The effort to purchase this particular piece of land has been in the works for the town since the early 2000s and in 2019 the proposal was approved.

The interest in the property is primarily in the historic structure that rests on it, the Ivey-Ellington house. The approval took some time as three partners were involved: the Town of Cary, the First Baptist Church and the developer. The mayor says the property is in a 120-day inspection period and the closing date is not for 23 months.

“We’re committed to preserving and restoring that house,” said Weinbrecht.

The house has been under renovation since July 2019. Updates will include the addition of 300 sq. feet, a walk-in cooler, updated restrooms and more. According to the restaurant owner, it will open in the next few months.

This building is planned to be demolished and redeveloped. The first step is removing the asbestos in early 2020 and demolition would begin in Spring 2020. The area will be used for parking until the time it is redeveloped.

“Keep in mind that Academy Street is our signature street and whatever is developed there is going to match and blend with what is already there. We’re not going to allow anything there or near there detract from what our Academy Street is today,” said Weinbrecht.

They’ve been working on properties downtown that have become rundown over the years and one of the opportunities they’ve identified is behind the old Rogers Hotel. An alley could be placed there to make way for shops, restaurants and entertainment.

Following the Cary Town Council’s December vote to rezone the Cary Towne Center Mall property to be mixed-use, planning has begun for what’s next at that location. The 87-acre property will be transformed to host 1.2 million sq. feet of office space, 360,000 sq. feet of retail, 450 hotel rooms, 1800 multifamily units and an indoor multi-use rec center. This is expected to be a regional draw to Cary along with the Fenton, but no specific timeline for its development was announced.

Other areas of interest the mayor mentioned were looking at the issue of affordable housing, storm water problems, safety measures and celebrating new leaders.

Finishing his address, Weinbrecht said, “2019 was a great year by many, many measures in Cary. It was a team effort and I’m honored and privileged to be a part of that team.”

“I think we’re in a unique position where we have a lot of key pieces in place. We have a non-partisan council that treats each other like family. We have a staff that’s led by an amazing person, Sean Stegall. We have a citizenry that believes in their government. We have business leaders that believe in the vision and what we’re doing enough so that they’re spending millions and millions of dollars and invested that into Cary. Those ingredients together will not only take us to be a remarkable community, they will take us to be beyond remarkable.”