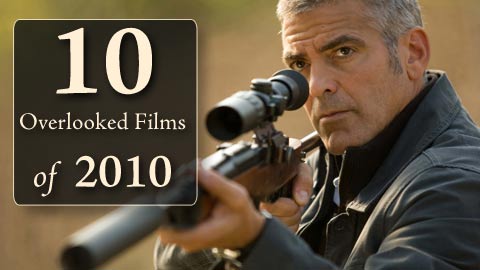 Cary, NC – Let’s get one thing straight: I like the Oscars.  And like many of you, I watched Sunday night’s proceedings and cheered for my favorites of the nominees.  For anyone who loves the movies, it’s hard not to get wrapped up in awards season, even if at the end of the day it’s all a bunch of sound and fury signifying nothing.

But, come on, let’s be honest: even though they claim to award the “best” in cinema, the Academy always misses some good ones!  There are plenty of films that were released over the past year the deserved more attention than they got, either from critics, mainstream audiences, the Academy, or all three.

Listed below, in no particular order, are ten great films you probably didn’t see.  Of the approximately 150 films I saw in theaters this year, these are the ones that should have gotten more attention than they did.  Maybe they weren’t released in the Triangle.  Maybe the marketing didn’t make them look very good.  Maybe you haven’t even heard of them.  It doesn’t matter.  They’re all out on DVD now or in the near future, so there’s nothing left to stop you from checking out these under-seen gems.

The American – Anton Corbijn’s exploration of an aging hitman hiding out in Italy substitutes quiet character moments for high-octane thrilling, but the result is a film just as intense as any big-budget action blockbuster, albeit for different reasons.  George Clooney deserved an Oscar nomination for his performance, which is arguably the most nuanced of his career.  The cinematography is beautiful, and Corbijn’s assured direction reminds us that sometimes more can be communicated with silence than any line of dialogue.

A Serbian Film – Of all the films on this list, this is the one you should most consider not seeing, but not because it isn’t a good movie.  Simply put: this one is not for the weak of heart.  I mean that.  This Serbian horror film about an aging porn star that takes on one last job is hands down the single most disturbing film I have ever seen in my life.  There is stuff in here that makes Saw look like an episode of Care Bears.  I was literally shaken by its depiction of graphic sexual violence – my body spent the last 20 minutes of the film in spasms in reaction to what was onscreen.  And yet, I don’t think it can be denied that this debut feature from Srdjan Spasojevic is a work of art, daring to explore everything from the plight of the Everyman to the mechanics of misogyny to the pros and cons of censorship.  It’s a brilliant movie, even if seeing it once was enough.

Catfish – The two dominant themes in film this year were the rise and consequences of social networking and the intersection between reality and fiction.  This is a movie that tackled both of them, following a young man who uncovers a startling truth behind an online friendship.  Is social networking bringing us closer together, or just substituting real relationships for fake ones?  You won’t see the twists coming, and the ultimate discovery is one of the most thought-provoking and moving revelations of the year.  There are accusations that the filmmakers weren’t completely honest in their intentions and that the movie might not be as “real” as we’re led to believe.  Oddly enough, that might be the point.

Four Lions – This might be the most subversive and daring black comedy since Dr. Strangelove.  Who knew terrorism could be so funny?  Not only is this story of a group of dimwitted British jihadists hilarious, but it’s great political satire to boot.  It dares to humanize its protagonists while never condoning their actions and asks: Does a war on terror become meaningless if there’s nothing of which to be terrified?

The Freebie – Katie Aselton’s debut feature about a couple who decide to give each other one night to sleep with someone else is the best relationship film of the year.  Using just a six-page outline, scenes were improvised and shot in several extended takes (some of which lasted as long as 50 minutes) and the result is some of the most naturalistic performances of the year.  It’s charming, bittersweet, and most important of all: honest.

Gasland – Josh Fox’s documentary might seem boring in premise – who wants to watch a movie about natural gas extraction? – but it had me on the edge of my seat.  It sheds light on the controversy surrounding “fracking,” a method of extraction that could be polluting America’s water supply and killing hundreds of people.  See this movie.  Last time I checked, water shouldn’t be flammable.

I Am Love – Tilda Swinton should have won the Academy Award two years ago for Julia, a performance for which she wasn’t even nominated.  She’s unjustly ignored this year as well for I Am Love, a gorgeous homage to European art films of decades past.  I mean, the woman learned Italian and spoke it in a Russian accent.  She deserves a statuette for effort alone!

Kick-Ass – Though it was intended to be a tentpole spring film, not enough people went to see this superhero action-comedy from director Matthew Vaughn for it to make huge waves at the box-office.  The bottom line: it’s one of the best times I had at the movies all year.  The action scenes are some of the most well-crafted in years and it finds just the right balance of gritty violence and dark humor.  Plus, there’s a foul-mouthed knife-wielding eleven-year-old and Nicolas Cage channeling Adam West.  What more could you ask for?

Scott Pilgrim vs. The World – Mark my words: in twenty years, Edgar Wright’s adaptation of Bryan Lee O’Malley’s graphic novel will be considered a cult classic.  It has action.  It has laughs.  And most of all, it has heart.  Who would have guessed a movie about a guy who has to literally battle his new girlfriend’s exes could be so grounded in the complexities of real-life relationships?  It’s the best video game/comic book movie ever, and the most fun I had in a movie theater in 2010.  Why isn’t this film nominated for an Oscar for Best Editing?  It doesn’t just flow well; it practically creates a new cinematic language.

Splice – Sigmund Freud’s pick for Best Picture.  Adrien Brody and Sarah Polley star as two rebellious scientists who create a genetic hybrid in this low-budget genre flick from Vincenzo Natali.  It’s less a monster movie and more of a (really) dark comedy about parenting, and its refusal to compromise some of its more, er, uncomfortable developments more than makes up for its flaws.

And there you have it.  Do you agree?  What do you think are some of the most overlooked films of the year?

Andrew Johnson is a freelance writer and the host of MovieChatter, a weekly film discussion podcast.  He also blogs about film at The Kuleshov Effect.  Of all the opinions out there about the current state of cinema, he swears that his are the right ones.

Harold’s Blog: How to Hide a Cell Tower, Cary Park and More Chicken and Egg Situation in Cary – Literally
Scroll to top