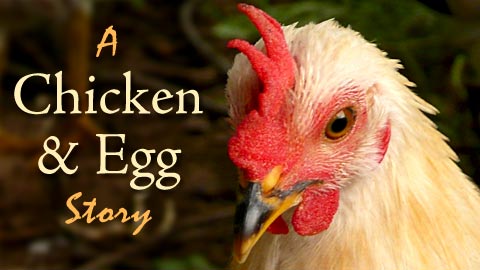 Cary, NC – I was at a dinner party in Raleigh and more than half of the attendees waxed poetic about the joys of raising backyard chickens.

The qualities of Wyandottes vs. Australorps were solemnly debated, and praise was heaped upon Easter Eggers, who prolifically lay beautiful blue eggs.  Many were trying to get their land taxed as agricultural land, and the income from selling eggs was a factor toward achieving that goal.

But one person there, who raises many different breeds who each have a name and a personality, said she has not made a cent of money in five years, despite selling eggs for $3 a dozen, but finds it to be a wonderful hobby.

I had already been considering it, but this was the moment that put me over the top.  We have three acres of land, I am planning a big garden this year, and I have time to muck out the coop.  The fertilizer in itself was enough reason to take the leap.  I also have the benefit of having lived in in the Carpenter community for 25 years, and so far not been annexed, although Cameron Pond now borders us on two sides.

As you may know, raising backyard chickens is not permitted in Cary, despite the involvement of requests by a group called Cary Chickens which got national recognition.

Searching for the Right Chicken

I went home and began to search the internet, and found a tool on a site that recommended chickens by specific qualities.  I entered “docile”, “good egg layers” and “hardy in winter” as the characteristics I needed, and I came up with a short list of nine breeds.

When I went to talk to my friend Dale Carpenter, who runs the historical feed/hardware store on Carpenter Upchurch Road, I learned that the chicks he gets in the spring – Rhode Island Reds – were on the list.  Then I began to research coops.

The really nice coops on Craig’s list were all in the $500 range.  I found a couple of very small coops for  $100, and learned that you can make nesting boxes cheaply out of Rubbermaid totes.  Our backyard dog pen was large enough to hold up to a dozen chickens, but it did not have an enclosed top, and unless you clip their wings, chickens like to fly. There is also not much sun in our narrow back yard, and I was not really excited about piecing together a makeshift situation.  Since I have spotted a hawk in our neighborhood, I didn’t really like the open pen idea.

Then I saw an ad for a really nice coop in Clayton for $500, which also included a dozen adult chickens—11 hens and a rooster.  “What breed,”, I asked?  Buff Orpingtons was the answer.  They were not on my short list.  However, they are docile and sweet, so much in fact, that he hesitated to buy a different breed because they might pick on them, and they are hardy in winter.  They are considered to be meat chickens.  But he was getting 10 eggs per day in the summer months, which sounded like plenty to me.  The deal also included feeders, waterers, a brooder with heat lamps, and the rest of his feed.  And he said he would take $400.

A Load of Chickens and a Rollback Truck

So we called up our friend Ron Carden, who has a rollback truck, and last Monday we caught all the chickens and put them in the brooder, pulled the coop on the back of the rollback and headed down I-40, looking a little bit like the “Beverly Hillbillies” – minus Granny in the rocking chair.

The coop is perfect.  A nice enclosed area up on stilts with 12 nesting boxes, a long perch, a side door for mucking out and a back door for collecting eggs, with an enclosed fenced area that sits on our grass and gives them a chance to forage.  The chickens are sweet, and the rooster is very protective.  If you come near, he inserts himself between you and his hens and watches you warily.  He crows at least twice  each morning, about an hour apart for about five minutes each, at around 5:20 and 6:20.  So far no complaints from the neighbors. 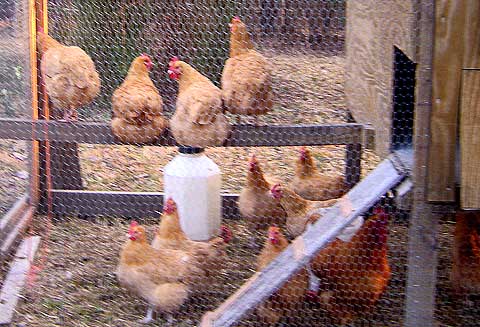 Even though we have 12 nesting  boxes, the hens prefer the bottom box on the far left.  They lay in late morning.

The first day, we got one egg. The second day, also one egg.

Yesterday, I checked about 10:00 a.m. and there were no eggs, then went back out twice more during the afternoon, but every time I went, there was a chicken sitting on the nest.  Finally about 4:00, I went out, knowing there would be at least two eggs, and found four eggs in the same nest.  It must be a little bit like using the ladies room in a crowded stadium.  They patiently waited in line for their turn.

So far, I have found them not to be smelly at all.

I already have a disposable lasagna tin collecting “fertilizer” that I will work into my tomato bed along with some lime.  Since we have a rooster, I may try to raise some chicks in the brooder.

But They Are Delicious…

We currently have the maximum number of chickens per recommended square foot.

I suggested having chicken for dinner to make more room, but my husband and son looked at me like I was out of my mind.