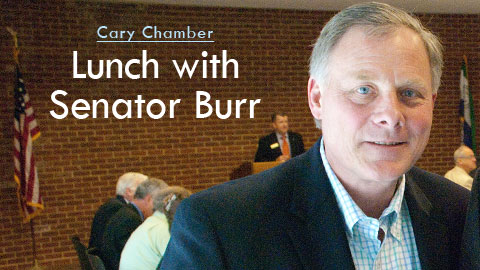 A crowd of almost 50 had gathered at the Cary Chamber to dine on Danny’s Barbeque and hear the national and global view from North Carolina’s senior Senator.

I didn’t see the Senator eat a bite of food, but  he did digest more than half a dozen of the most pressing issues of the day for his Cary audience.

Senator Burr began with some comments about the recent tornadoes in our part of the state. He was dressed in blue jeans and a sport shirt, fresh from visits to some of the hardest hit areas.

But quickly, his talk shifted to the ballooning national debt. According to the U.S. Congressional Budget Office, federal spending totals $3.5 trillion dollars while we only collect $2.2 trillion in revenues. The U.S. Treasury lists our total national debt as $14.3 trillion, or almost $129,000 per tax payer.

“If we cut out all discretionary spending and all military spending, we’re still $200 billion in the hole this year.

The problem is real and something has to be done. We have to take on entitlements – Medicare, Medicaid and Social Security.”

Senator Burr said he favored giving states the right to opt out of Medicare in favor of a lump sum that increases every year and provides for local control.

The Senator shocked the Chamber audience when he said he agreed with Senate Majority Leader Harry Reid (D-NV). “Harry Reid got up and said ‘there’s no sense of urgency'” to the Social Security debate “and he’s right,” Burr said.

Consistent with what he said in Cary just a few weeks ago, Senator Burr stated that Social Security reform would probably include “means testing.”

Europe’s economic crisis has mirrored our own. Instead of states in financial trouble, substitute countries. Europe’s relatively weak central institutions have had difficulty getting a handle on crises in Greece, Ireland and Portugal. Much larger economies in Spain and Italy may also be at serious risk.

“Europe is a continent in denial,” Senator Burr said, suggesting that we should view their approach to systemic reform as a cautionary tale.

Senator Burr talked for a while about his desire to consolidate and shrink the federal government.

In what has become a hotly debated issue, the Senator said he is submitting a proposal to merge the following federal departments:

Senator Burr serves on the Senate Energy and Natural Resources Committee as well as the Select Intelligence Committee. His perspective on the Middle East? “Changes in the Middle East will continue for 30 years. It’s a sign we need to change our demand profile.”

The Senator said “I applaud the President for talkung about our energy needs.” But, he added, “we won’t solve the problem with windmills and solar panels. Maxed out, it’s 11% of our need.”

After the business gathering had finished off the barbecue, slaw, biscuits and sweet tea, Senator Burr talked abouttaxes.

He said he expected the “Gang of Six” (a bipartisan group of Senators hammering out budget reform) to recommend a corporate tax decrease of 20%. “But don’t cheer so fast,” he told the crowd at the Chamber. He said he expected fewer deductions and a move to incentivize consumption instead of manufacturing.

In today’s globalized economy, capital flows determine the winners and losers in the world economy.

Following the U.S. mortgage and banking crisis, capital flowed out of the U.S. Economic outout fell and unemployment rose.

But now capital is poised to flow back into the United States, according to Senator Burr. “Europe’s problems will deepen and Japan will implode.”

The big question, said Senator Burr, is whether or not we will make the reforms necessary to once again be the world’s de facto safe haven.

“Will we keep it long term, or will it just move on to the next hot market?” Senator Burr asked the crowd.

Thanks to the Cary Chamber

Thanks to the Cary Chamber for organizing the event and to Senator Richard Burr for making a lunchtime stop on Academy Street in Cary.

In this season of uncertainty in America, a lot is table for the U.S. Congress. What do you think of Senator Burr’s proposals?