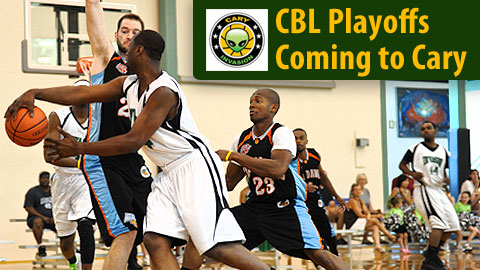 Cary, NC – Playoff basketball is coming to Cary on Friday June 24, 2011. The Cary Invasion, 9-0 in their inaugural season, will face a to-be-determined opponent in the first round of the CBL Playoffs at Herb Young Community Center.

If you haven’t had a chance to go to a game, the Invasion is  a big, fast team and plays an uptempo, exciting game.

All the players in the league are high-skill. Many have played in the NCAA or European leagues.

On Friday night, the Invasion rolled over the Fayetteville Crossover 112-99 at HYCC. Former NCCU standout Jonathan Moore led all scorers with 27 points and 9 rebounds. Former Clemson guard Chris Poole electrified the crowd with 16 points and 12 assists for the Invasion.  Six players scored in double figures for Cary.