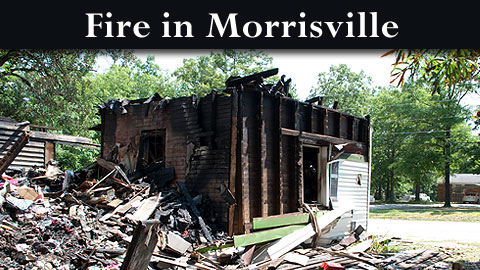 Story and photos by Hal Goodtree

Morrisville, NC – A little over a week ago, fire took a small home on Church Street in Morrisville. I wandered over a few days later to take some pictures and met Mary Upchurch, who grew up in the house.

Circa 1905 House Burns to the Ground

Mary Upchurch was collecting the mail from in front of the burned house when I arrived. I introduced myself and we talked for about half an hour.

Mary grew up in the house, now reduced to ashes and charred wood. She said her father built it around 1905. She showed me where the exterior had been repainted, and then covered over with aluminum siding, the history revealed once again by the fire. 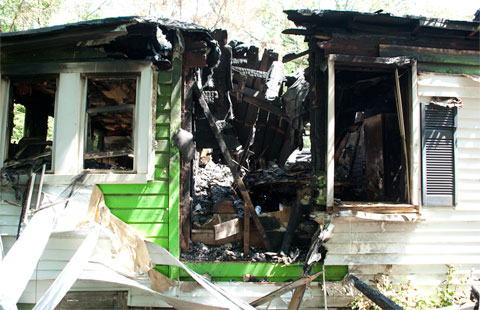 “That was just a dirt road,” Mary said, pointing to Church Street. “We used to play right here in the front yard.”

Mary’s sister had occupied the house. I asked if her sister was safe. “She’s fine. She’s over in my house now,” Mary said, pointing to a contemporary ranch across the street.

“She’s hasn’t been able to look at it,” Mary continued, examining the wreckage of more than a century of family life. “She’ll look at it when she’s ready.”

The blaze started around 9:00 am. Mary was at Duke Hospital in Durham with her adult son. He gets treatments for chronic pain. A neighbor called on her cell phone and said her house was on fire. Mary didn’t realize it was her sister’s house until she returned to Church Street.

Mary said fire crews from five towns fought the blaze until about 4:30 in the afternoon. “Probably an electrical fire,” she said, pointing to a room in the back with timbers charred completely black.

I asked about insurance. Mary said they didn’t have any.

We talked about some other things. Things she wished she had and things she hoped to rescue.

“But we can always get more things,” Mary Upchurch said. “At least we have our lives.”