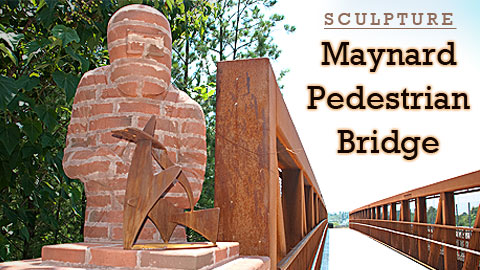 Cary, NC – You could drive right past the new sculpture installation on Maynard between High House and Chapel Hill Road.  But it’s worth your while to stop and get a closer look.

The new installation is on a pedestrian bridge parallel to Maynard but high over the train tracks.

The bridge itself is different from the surrounding area. It’s a erector set of geometric beams and girders that seems to soar above the land.

The new sculptures grace the beginning and end of the bridge. They are part of the collection called The Arts Alfresco by artist Brad Spencer of Reidsville, NC.

The collection is in three parts – on the Maynard bridge, at the corner of Chapel Hill Road and at the entrance to Dog Park. According to Cary Visual Art:

“The work illustrates how creative thought and action can be inspired by the open air environment.”

The three section installation of The Arts Alfresco punctuates the portion of the Black Oak Greenway that runs beside Maynard Rd.

Each sculpture on the bridge has a quote beneath it. I like this one:

“Art is not what you see, but what you make others see.” – Edgar Degas

Other quotes are from artists Henri Matisse and Pablo Picasso as well as Roman statesman and orator Marcus Tullius Cicero.

Art on a Human Scale

As noted above, you might drive past this sculpture unknowingly. And that’s okay.

Because the sculpture on the Maynard pedestrian bridge is art on a human scale. It’s meant to be approached on foot, not glimpsed from behind a windshield.

Park at the State Credit Union at the corner of Maynard and Chapel Hill Road. Walk up the sidewalk and across the bridge.

You can drive by. But it’s well-worth stopping.