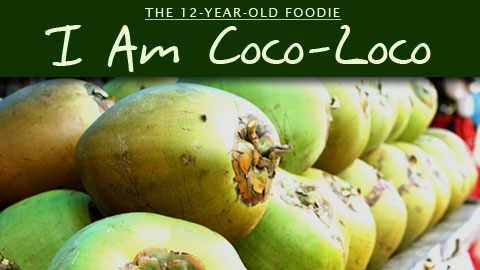 Cary, NC – Story by Kaynan Goldberg. Kaynan is CaryCitizen’s 12-year-old columnist on all things frugal, crunchy, healthy and green. She blogs at VeggiesGoCrunch. In this installment she continues her thoughts on the virtues of the coconut. Photo by Easa Shamih.

Cure for the Crispy

Speaking of summer, my  friends and I went down to Jordan Lake (it’s about half an hour out of Raleigh) a few days ago and swam, splashed each other, walked around, etc.

It was a lot of fun – so much fun, I forgot to put sunscreen on.  For three hours.  Needless to say, I’m rather crispy today.

For some reason, the aloe stuff we got from Walgreen’s doesn’t like me, so I tried putting coconut oil on my burned face.  Aaaahhh, it felt good!  (Ironically, coconut oil can also be used as sunscreen, so if I had put it on before going to the lake, I could have saved myself a whole lot of woe.  Huh.)

Now, after my nice little story about lakeside fun and sun, it’s time for a super-serious post.  This post will be full of science-y…uh…stuff, and hopefully will make absolutely everything about coconut oil crystal-clear.  Or at least will make 60% of it a bit less murky.

First of all, what is coconut oil?  It is a white substance made from the meat of a mature coconut, which can be either dried or fresh when the oil is extracted.

Fresh meat results in a purer oil, which is practically sent from heaven, while coconut oil made from dried meat, or copra, is usually RBD’d – refined, bleached, and deodorized, and to be avoided at all costs!  It can even be hydrogenated, which means it is combined with hydrogen molecules to extend its shelf life.

Back in the 80’s, when people shunned coconut oil, hydrogenation was a big factor – hydrogenated coconut oil becomes a trans fat, and trans fats cause inflammation.  (More about fats in coconut oil in a second.)  Virgin coconut oil, on the other hand, is never heated, or processed, really, beyond the bare minimum.  Sometimes the oil is extracted in a centrifuge machine – sometimes it is cold-pressed.  The oil is never bleached or refined, and it is never, ever hydrogenated.

Coconut oil used to have a bad reputation, thanks to it being 90% saturated fat.  But lately, people have been realizing that the fats in coconut oil are not bad.  They’re mainly medium-chain fatty acids (MCFAs), which are “essential fatty acids” and are used for energy.

MCFAs are digested differently from other fatty acids – they practically turn themselves into energy – and they’re only found in three known substances: human breast milk, horse milk, and coconut oil.  Coconut oil is even used in baby formula, because MCFAs are so important.

Aside from the great MCFAs, coconut oil is antibacterial, antifungal, and antiviral.  It boosts your immune system, and it helps your liver, too.

So, now you know why coconut oil is so amazing, but you probably don’t have any idea how much you can do with it.  Not only is it a good sunscreen (and sunburn remedy), it can be used:

And finally, my favorite application – acne treatment! As a twelve-year-old girl, I can honestly say even though putting oil on your face seems kind of backwards, the antibacterial properties of coconut oil, combined with the moisturizing effects, clear acne up quickly without drying your skin.

This is just the tip of the iceberg.  If you thought I was crazy about coconut oil, there are total coco-locos out there with some pretty surprising suggestions about the stuff.

I’ve got to go make my sisters some popcorn and put some coconut oil on my sunburned face.  Bye!

(Note:  This is why my family buys coconut oil by the gallon.  Caveat emptor – once you try it, you’ll use it for everything!)

Scavenger Hunt: Come Drive Away with Me