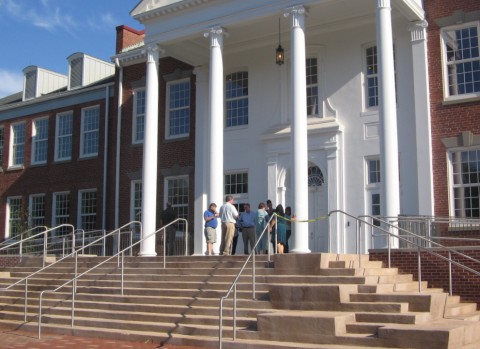 Cary, NC- I got a sneak preview of the new Cary Arts Center last week with Town of Cary’s Cultural Arts Manager Lyman Collins as my guide.

As a past graduate of the Cary School of Government, I received an invite to a pre-opening tour. Lana Hygh, Assistant Town Manager, said 60 people responded “YES”.

Greeting us on the steps, Lyman explained that the central door is original to the building. The two flanking doors are for exit only and formerly were windows.

Lyman likes to explain the importance of education to Cary, and that the focus of this arts building is to radiate the arts & education down Academy Street and into the town. Cary is often called “the town a school built” thanks to founder Frank Page and the building of the original Cary Academy, then Cary High School.

This historical landmark looks pretty much the same as it did before the  – but in some ways “better”.

The porch has been expanded from the original, being much deeper, and accommodates the wheelchair ramps which come up either side. The windows were replaced to look as they originally did, with 12 over 12 panes of glass. The former drive circle in the front has been bricked over as a circular patio and colored solar panels have been installed that glow at night in a rainbow of colors. The planters are designed as sitting areas. 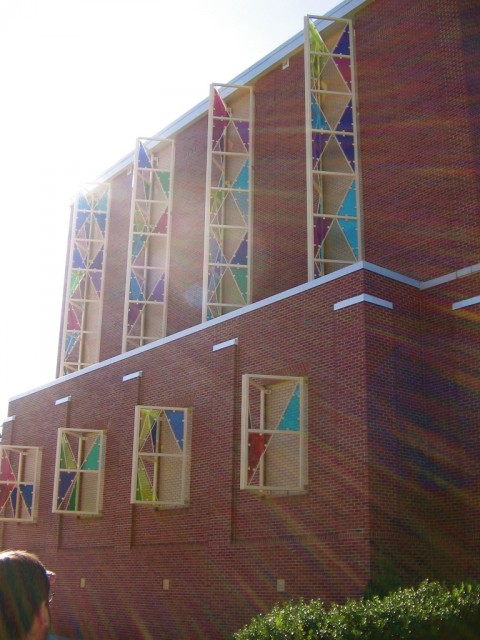 Stained glass panels installed at the rear of the fly tower

We walked around to the back to observe the famous “Flytower” which will allow theatrical performances to change backdrops. The stained glass decoration on the exterior had recently been installed. The pattern echoes harlequin design or quilting.

A new cornerstone will be set at the dedication and local arts groups are encouraged to add something to the stone. The old section of the building still has its original stone.

As we entered the lobby I was struck by the museum quality of the interior.  The open, vaulted 2 story lobby conveys a sense of grandeur.

The central staircase has glass treads that transition from red in the lower floor to deep blue on the third. The etched art panel walls will be installed next week and  were seen leaning against several walls in the building.

The building today is still under construction, and some areas were taped off, including the 398 seat theater.

Lyman was eager to show off the dedicated gallery space. The first show will be installed next week consisting of art from the building’s instructors. The new space allows for sculpture to be displayed on pedestals, something unavailable elsewhere in town gallery space.

Many  hallways incorporate lighted niches that will house art objects. There are recovered lockers used as “wainscoting” for seating nooks on all the floors. Some of these are still functional while others use just the fronts. 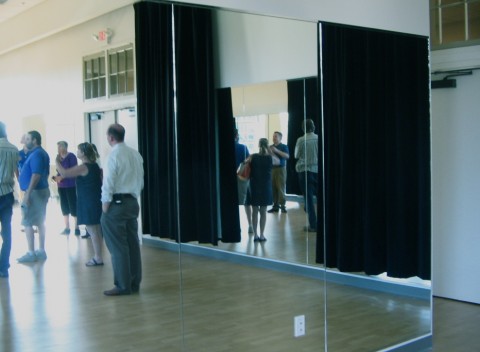 A classroom in the new arts center

Throughout, above the classroom doors were kept the clerestory set of windows. The sense of the space being light and airy was surprising. By opening up the rooms with lots of windows and the main interior space being two stories lets lots of exterior light into the building. Several rooms have display cases that have glass as the back to see into a classroom.

Downstairs the building changes character. The floor is exposed red stained concrete. There are 3 clay studios, one for children, adults and a large open studio. The kiln room can hold up to seven kilns. There will be an office where supplies and clay can be purchased.

The Construction Lab (woodshop) has not received tools and machines yet. But, set building and shop classes will be offered here for the first time.

A Textiles Lab had many outlets located in the floor, presumably for sewing machines. Cary will now offer courses in sewing, embroidery and other fiber arts. Costume design will take place for resident organizations including the Cary Players and Applause!. There are also two rooms for storage.

Another exciting addition is the dressing area. Two large dressing rooms are complete with lighted mirrors, showers and toilets. They flank a separate green room, and a discrete entrance to the stage via stairs or elevator.

This week, the Cary Cross Currents Chamber Music and Arts Festival kicks off the excitement in the building. Our own Cary Scavenger Hunt follows on July 23rd. On August 12 and 13, the town will hold the official grand opening celebration just before Lazy Daze on August 26.

Classes will begin filling the building starting next week. Check out the town’s brochure for registration info.

Park West Village To Open This Fall
Scroll to top