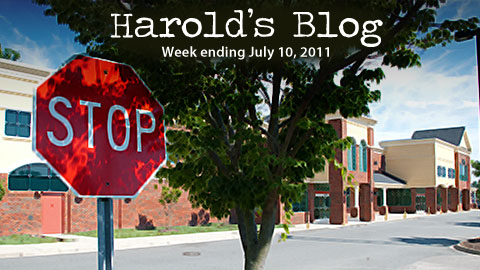 Cary, NC – From the blog of Cary Mayor Harold Weinbrecht, covering the week through July 10, 2011. Photo by Hal Goodtree for CaryCitizen.

Even though this was a holiday week, it was a working holiday for me.

The proposed ICE facility at the Kroger site at High House and Highway 55 has drawn a lot of attention throughout state and federal governments.

Over the weekend and spilling into July 4th, I talked several people including an ex-mayor, a former NC Senate Majority leader, and school board members. All seem to have major concerns about this proposal.

Monday afternoon I had a conversation with Congressman Price. His office continues to be a major help in gathering information. He acknowledged our resolution and pledged to help us. He said he was glad we were holding a community meeting and would be there except he has to be in Washington during the week. So he promised a member of his staff would be attending.

Monday night my family went to the amphitheater to hear the NC Symphony and to watch the fireworks. After the Cary Band’s excellent performance I went up and introduced council members, special guests from Japan, and welcomed the crowd. Shortly after that Mother Nature decided to have her own fireworks show. So the symphony did not play and the fireworks were postponed until Tuesday. I went home and watched the Washington DC fireworks and then the NY City fireworks on TV. Unfortunately, it just wasn’t the same as the symphony and fireworks that I am used to.

Tuesday started with a conference call to the GSA about the community meeting for the proposed ICE facility. The only date they said they could hold a meeting was on Thursday, July 14th which is the night of our regularly scheduled council meeting. I asked them to move to another night and they said they couldn’t. They also expressed a desire to have this meeting last no longer than 90 minutes. I explained that this was a major community issue and that I believed Q&A would last that long. In addition, I said the media would be in attendance. Unfortunately, I couldn’t get them to change the day or the length of the meeting. So the community meeting on the proposed ICE facility is scheduled to be held at Green Hope Elementary at 5 PM on July 14th. Unfortunately, the council members in attendance (including me) will have to leave no later than 6 PM to make it back to town hall in time for our meeting. We will have staff brief us on the comments and questions that we will miss.

Later Tuesday I met with the town manager and Mayor Pro-Tem to go over the town’s hottest issues. Most of our conversation was on the proposed ICE facility and facts that surround this issue. We all agreed it would be a good idea to brief the HOA president of West Park with the latest information and that was done the next day.

Wednesday night I attended a dinner at the Matthews House in honor of a guest that was a downtown expert. John Hinnant, the CEO/president of Wilmington Downtown Inc. was in town to talk about Wilmington’s downtown experience and give advice about Cary’s downtown. I was fortunate to spend a lot of one on one time with Mr. Hinnant and learned a great deal about the experiences of Wilmington as it revitalized its downtown.

On Thursday morning I attended the Heart of Cary Association meeting. Mr. Hinnant gave a slide show about Wilmington’s downtown. The room was packed and the slide show was not only informative but at times humorous. One point made in the slides was that façade changes can create a whole new perception of an area.

The rest of my week was spent in private meetings and dinners. I also continued to field calls, emails, etc from various people concerned about the ICE facility.

Emails this week were coming in droves. Most of the emails were about the proposed ICE facility. One staff email notified council that “because the community meeting was not able to be scheduled until July 14, GSA will extend its two week pause to July 20″.

Other emails included complaints about the apartments approved at Tryon and Cary Parkway, a complaint about vegetation obstructing views at intersections, complaints about the I540 noise, an inquiry about Wi-Fi at the new train station, and thanks for buying the old Cary Theater.

I also received an email about the Umstead Hotel being named the 10th best Hotel in the US and Canada by Travel and Leisure. See http://www.travelandleisure.com/worldsbest/2011/hotels/large-city-us-canada/283 for the announcement.

Next week promises to be busy for me. In addition to a council meeting, a Western Wake partners meeting, and several private meetings there is the big ICE community meeting.

Well that is all for this week. My next post will be on Sunday, July 17th. Please feel free to email me with a comment. Email all Town of Cary questions or comments to Harold.Weinbrecht@townofcary.org. Email personal comments to augustanat@mindspring.com.