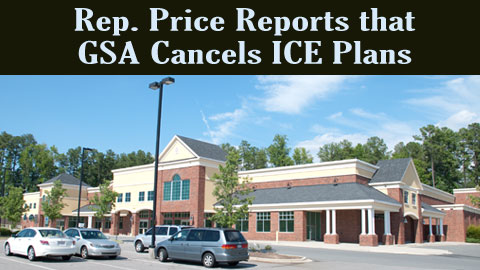 Cary, NC – According to a press release from Congressman David Price’s office, the GSA has decided to cancel plans to put an Immigration and Customs Enforcement (ICE) facility at an abandoned Kroger supermarket in Cary.

The following news was received by CaryCitizen around 3:10 PM on Tuesday:

Representative David Price (NC-04) released the following statement today regarding the U.S. General Services Administration’s (GSA) decision to cancel a planned lease of new office space for U.S. Immigration and Customs Enforcement (ICE) operations in Cary.  One of the few options being considered was a former Kroger supermarket off Highway 55, which had elicited many concerns from among Cary residents.  GSA will now re-start the lease procurement process and consider other options for the ICE facility.

“I think GSA has made the right decision to cancel this move and to reopen the consideration of lease options.  It’s important that the Town of Cary and local residents be fully included in any decision about the location of a law enforcement facility of such a significant size in their community.  I was glad to help bring the federal agencies together with the Town of Cary to ensure that all views and options were considered before a decision was made.”

No word on the planned meeting at Green Hope Elementary for Thursday evening.

Here’s the text of the GSA announcement, forwarded to us from Rep. Price’s office in Washington:

Atlanta, Georgia – On July 12, 2011 Southeast Sunbelt Region Regional Administrator, Shyam Reddy, announced the Agency’s decision to terminate the current solicitation for office space in Cary, NC on behalf of U.S. Immigration and Customs Enforcement, Department of Homeland Security. GSA decided to terminate this lease action because none of the submitted proposals met the requirements set forth in GSA’s initial Solicitation For Offers.  GSA reached this decision after a comprehensive review of the client’s needs and the offers submitted in response to GSA’s Solicitation For Offers.

Although the current solicitation for space is being terminated, Mr. Reddy stated that “It is our intention to initiate a new Solicitation For Offers in the hope that suitable properties will be submitted for consideration that meet the requirements established by GSA and ICE.   GSA is committed to working hand in hand with ICE and the local community to make sure that ICE can consolidate its 3 locations in the Raleigh/Cary area into one location in the Greater RTP Area.”

In announcing GSA’s decision, Mr. Reddy stated “We are aware of the community’s interest in the location of the new ICE facility and want to work with the local community to make sure ICE is located in an area that will help it accomplish it’s mission and benefit the local community.   Its important to GSA that we be as accessible and collaborative as possible during the procurement process because we truly want to make government work better for the American people.  We look forward to having that conversation with the community in the beginning, during and at the end of the lease procurement process”.

GSA expects to publish a new solicitation for offers in the next few weeks.