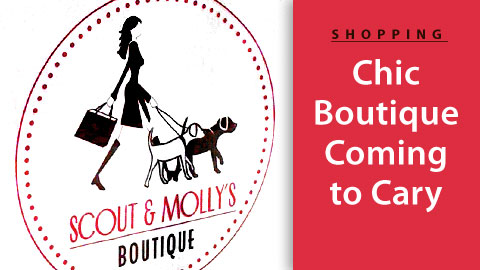 Cary, NC – Scout & Molly’s, a chic boutique and longtime mainstay of the fashion scene in Raleigh, is getting set to open a store in Cary.

The Cary location is getting a fresh coat of paint in Stone Creek Village right next to Pink Alli. Get your hair cut across the street at J.F. Gemelli, have lunch at Cafe Caturra and make a day of it.

Scout & Molly’s represents another step forward in the growing sophistication of Cary shopping. The emphasis is on designer trends, not traditional or even mass market. Designers include Trina Turk, BCBG Maxazria, Tibi, Hudson Jeans and Alice & Trixie.

It’s fashion for people who want to look unique and can spot a trend before everyone else. Scout & Molly’s also sells shoes.

Lisa named the store after her two Labrador Retrievers, Scout and Molly.

The new Cary store looks set to open before the end of summer.

Weekend Events: Music in the Air

Charity Dog Wash in Cary on Saturday
Scroll to top