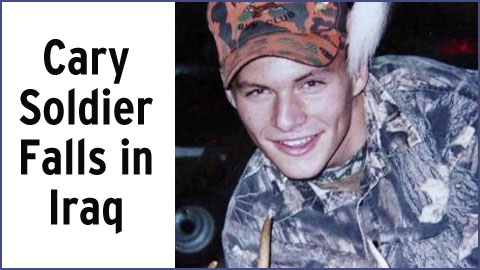 Cary, NC – Specialist Daniel L. (Lucas) Elliott, based at a unit in Cary, lost his life last week to an improvised explosive device in Iraq.

According to the Department of Defense:

Basra, an oil city in the south of Iraq, is under the control of the Iraqi government following the departure of British forces in 2007. It has been less in the spotlight recently as fighting has escalated in Afghanistan.

Specialist Elliott, an MP, was on his second tour of duty in Iraq. Four other soldiers were injured in the attack. Military representatives notified the family on Saturday morning.

Lucas Elliott is survived by his mother and father, Patti and Ed, brother, Bradley and wife Trisha. He will be buried in Arlington National Cemetery.