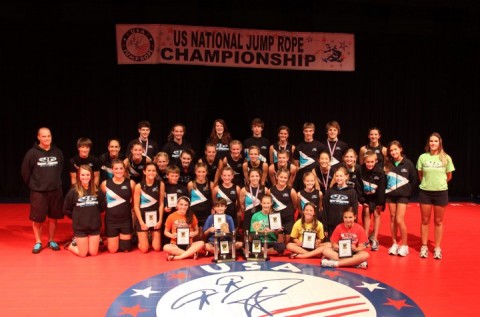 The team took home a silver medal in a tie for best team in the country and placed second for overall freestyle events and Large Team Show.

The Super Skippers won a grand total of 28 medals in age division events: three gold medals, 18 silver medals and seven bronze medals while also garnering more than 50 top 10 places. The team qualified for 12 events in the USA Jump Rope Grand National, an event reserved for top scorers at the competition across all age groups. In this elite category, SuperSkippers won one gold, three silver and one bronze medal.

Nearly 900 jump rope athletes from as far away as Hawaii and Alaska competed in the national competition. Forty team members from the Super Skippers competed, a record number for the team.

Jump rope is a sport that combines agility, speed, endurance and even tumbling. Several of these athletes also play other sports, including track and field. The conditioning they recieve as members of this team will set them up well for a life of fitness.

Here’s a run down of the team’s award highlights:

This group continues to reach new heights when they compete- congratulations to the Cary YMCA Super Skippers!