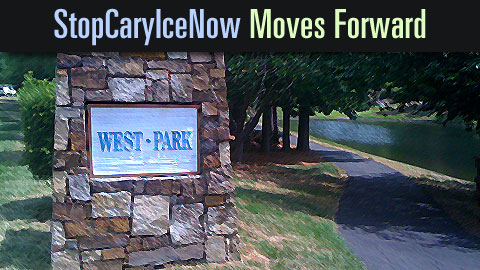 StopCaryIceNow, a community group that opposed plans for an Immigration & Enforcement Center at the Kroger on NC 55 and High House, is reinventing itself to help be an agent of change in the neighborhood.

What Now for Kroger?

Now that GSA has abandoned the Kroger site, there’s still a big empty building in the shopping plaza the connects directly to West Park.

West Park HOA president Mark Howard and friends have changed focus to pro-actively seek development of the former grocery store site. They have been contacting senior management at Whole Foods Market in an effort to persuade them to make an expansion in West Cary.

The group is planning a new website reflecting the pro-active stance.

For all the background on the ICE story, see carycitizen.com/tag/ice/.

Reducing the Source of Friction

In recent years, there have been several retail developments that have caused citizens to organize resistance. In many cases, residents have felt they learned about the plans too late in the process.

This new group seeks to be engaged earlier and hopefully partner with developers, real estate agents and commercial interests so that what gets built is welcome in the community.

Mark Howard also had some interesting behind-the-scenes details of the ICE story.

Howard related how on Tuesday (last week), before the scheduled public meeting, one of his group saw several black limos pull into the Kroger parking lot. A bunch of people got out and looked around. They quickly got back in their cars and zoomed off.

Shortly afterward, a statement was issued that the site was no longer under consideration. The public meeting was canceled shortly after.

At Thursday night’s Town Council meeting, four members from the GSA were on hand to talk with the town council and town residents in the audience. They also answered many questions.

In a fascinating and enlightening bit of video, Shyam Reddy, Southeast regional administrator with the GSA, addresses the Cary Town Council.

Mr. Reddy is an important man in government. He’s a Presidential appointee and heads an agency that covers 8 states, manages 44 million square feet of real estate and 44,000 vehicles, has an 8 billion dollar supply chain and 1,000 employees. He’s also a former partner at Kilpatrick Stockton with prior experience in the Triangle.

It’s some measure of the importance of the issue that the regional administrator felt it was a good thing to come in person and speak at length.

Reddy complimented the town on their actively engaged residents and went on to say he was impressed with how fast the West Park neighborhood rallied, and what a great job they did with fact finding.

The GSA has said they will make our episode into a case study of what they don’t want to happen during the lease acquisition process. Their website states that they actively seek engagement with the communities in which they are located.

The current Cary ICE facility has been a good citizen, and they have enjoyed doing business in our town.

GSA says they will be actively engaging the town as they restart the search for a new relocation site.

Mr. Reddy said that many steps in the first process were apparently ignored. They will carefully take a map and cross out areas that are not good for ICE and Cary. Then, from the areas that would satisfy their criteria, they will request bids.

And in West Park, a nascent community group can turn their attention to promoting positive developments in the neighborhood.

Happy ending all around.