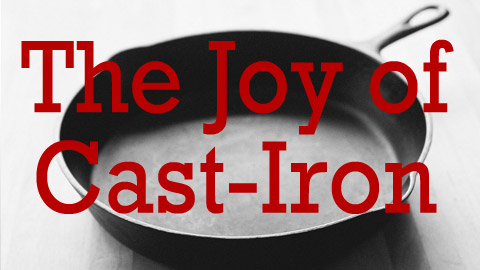 Story by Kaynan Goldberg. Kaynan is CaryCitizen’s 12-year-old columnist on all things frugal, crunchy, healthy and green. She also blogs at VeggiesGoCrunch. Photo by Kirk Olson.

Cary, NC – You know how I promised you a cast-iron post?  Well, I consulted with a friend who used to be in the culinary gadgets business (she worked in that high-end cookware store in the mall – you know the one), and she came up with a whole list of reasons why cast-iron is amazing.

The Benefits of Cast Iron

Cast-Iron is naturally non-stick.  Once you season your cast-iron skillet, you don’t have to worry about your food sticking.  As long as you re-season it every so often, it’s the perfect non-stick pan.

Inexpensive purchase price.  Cast-iron is cheap.  You can get a 8 1/2″ diameter skillet for fifteen dollars, as opposed to a $25 non-stick pan, or a $160 stainless steel pan.

Easy to clean. I mean, what other kind of cookware begs you not to use soap on it? Any stubborn food particles can be scrubbed with a brush and coarse salt.  You can also wipe your pan out with a paper towel, if you want

Retains heat very well, which uses less energy.  Cast-iron takes a little longer to heat up, but once it’s hot, it stays hot.  It also tends to distribute heat more evenly, which means you’ll have better eggs, pancakes, cornbread, fish, chicken, burgers, panini sandwiches or whatever you choose to make in your skillet.

In the end, you can pass it along to another generation to use, since even if it got rusted from years of attic neglect, you can sand and re-season it and voila – you have a new pan and you can go back to #1 above :)  That’s what I love about cast-iron: It’ll last forever.  I’ve seen pans that are at least fifty years old.  They’re great family heirlooms: “This was my great-grandma’s first cast-iron frying pan…”

A. Can be used as a food press to make panini or evenly cooked bacon- just plop it on top of the food in another pan.  This does work – we’ve tried it.

D. Makes use of charcoal that is done cooking your food: while coals still hot, put some bacon grease on the pan and set out over coals. It will season that pan and prolong the non-stickedness.  Like I said above, right?

E. Just looks cool.  And, really, what more can you want?

F. Protection from burglars: just hit someone over the head with one of these when they walk past the doorway and you won’t have anything to worry about.  For a good example, see the new Disney Princess movie.

Technology: A Brief Introduction to Google+