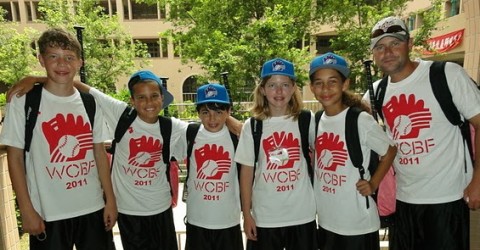 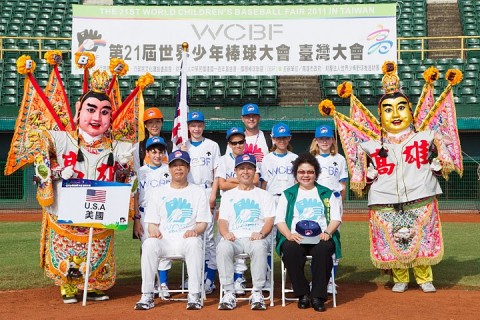 story by Lindsey Chester, photo provided by USA Baseball and the WCBF

“The International Baseball Federation reaches out to USA Baseball each year to see if they have any kids ages 10 or 11 that are interested in attending this Fair each year, which is how the Town of Cary started sending kids several years back.  …  This year we had an opportunity to send 3 kids from Cary. We sent out a mass email to any boy or girl aged 10 or 11 that had participated in a Town of Cary program over the last year.  As a result, we had 21 kids that replied back that they were interested in attending this event.  We then put all the kid names in a hat and drew the three lucky winners in early February. “

Austin Snyder, Ashley Hiser and Bennett Otten were the lucky kids selected from Cary.  In addition to these three, two other kids, Gabriel Roy from Delaware and Taylor Parnel from Los Angeles were selected through a national kids magazine who ran an ad for kids submit a story as to why they would be interested in attending.

Barry Mitsch (of Pyramid resource Group- story) was the one who informed Chris that the WCBF actively recruits a chaperone each year.  He then reached out to the WCBF to let them know of his interest.  A few weeks later, he was selected.

Chris has extensive baseball background, and was able to also serve as a coach at the clinics each day.  He said the camp was designed to teach the basic fundamentals. Most of the players were just learning the game.  The fair takes place over the course of nine action packed days. Each morning starts with a 3 hour clinic. The afternoons are reserved for cross- cultural activities.

Why a Baseball Fair?

The program was initiated over 20 years ago (in 1989) by World Home Run Kings Sadaharu Oh and Hank Aaron along with Dr. Akiko Agishito, to introduce and promote baseball throughout the world.

“Recognizing that the sport of baseball promotes teamwork, good health, discipline and friendship, Mr. Oh and Mr. Aaron conceived the idea of the WCBF as a means of creating goodwill and fellowship among the children of the world.” WCBF website.

The first fair was held in Los Angeles in 1990. Two hundred athletes participated from twenty-four countries. Since then the majority of the fairs have been held in Japan with one each held in Puerto Rico,  Canada and San Diego. Last year Tokyo’s Olympic Park played host to the event.

Each Country selects 5 athletes and one chaperone to accompany them. Parents do not attend or travel along, hence the need for team chaperones. Teams consist of boys or girls aged 10-11.

Athletes do not bear any expense to participate. The Fair has generous sponsors, so that no child is left unable to participate if selected. The Town of Cary’s relationship with USA baseball has had a direct impact on area youth participation. Cary has sent 15 athletes to the fair in recent years.

Just another way that the Town of Cary’s Parks and Rec program can enrich the lives of its participants.