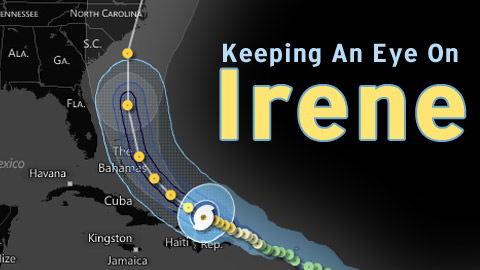 Cary, NC – The sky is clear today and the air is bone-dry. But to the south, Hurricane Irene is strengthening with a trajectory that could hit the Carolinas.

Keeping an Eye on Irene

As of this writing, the storm is a Category 2 hurricane with winds up to 100 mph.

Irene is currently north of Puerto Rico and on a path to rip through the Bahamas.

Hurricanes are unpredictable beasts, and Irene could take a left and crash into Florida or hang a right and go harmlessly out to sea.

But right now, the most likely path is the North Carolina coast.

If Irene makes landfall on the Outer Banks, it’s likely rain and high winds would effect the state as far west as Charlotte, according to Hurricane Central.

The effects of a Category 2 or 3 hurricane making landfall on Hatteras would be devastating to coastal properties, but likely just be a bad rainstorm here.

The worst track for hurricanes as far as Central Carolina is concerned seems to be hurricanes that come ashore near Wilmington. Those can rip straight up the Cape Fear valley and wreak havoc to the state’s most populous areas.

The 35th Annual celebration of Lazy Daze in Cary is set for this Saturday, the date of projected landfall according to the most recent forecast.

Town of Cary is on alert, but advises that, at this time, Lazy Daze is scheduled to occur as planned. Refer to the town website for updates.

People traditionally run to the grocery store and stock up on basic items prior to a hurricane. Those include batteries, water, milk and bread. Some folks mentioned a run to the ABC store.

If indeed Irene is headed this way, folks may want to stow away any small pots, planters, chairs and other outdoor items that could get airborne.

Timing is everything with hurricane preparedness. Too soon, and you may go to a lot of trouble for a storm that moves out to sea. Wait too long and the stores will be sold out, the storm raging and you’ll be stuck in your house with bread. Or beer.

Thursday-Friday will be a key window to judge whether or not Irene will be visiting North Carolina.

Sit tight and enjoy the fine weather this week. We’ll bring you an update on Irene if it appears necessary to prepare for such a stormy houseguest.

Music: Last Motel on the Radio