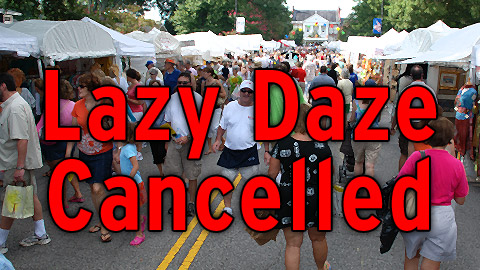 Cary, NC – With Hurricane Irene making an uncertain path toward the North Carolina coast this weekend, The Town of Cary today officially announced they would cancel the 2011 Lazy Daze Festival.

For the safety of everyone involved, the decision was announced Thursday at 2:30 in email messages through the town.

After consulting with local, state, and federal forecasters and emergency management officials, the Town of Cary has cancelled Saturday’s Lazy Daze Arts & Crafts Festival because of the significant potential for unsafe conditions due to high winds from Hurricane Irene.

In thirty-five years of hosting the festival, the Town has never been forced to cancel. The event will not be rescheduled for later this year.

“Nothing is more important to us than the safety of our artists, entertainers, guests, volunteers, and workers,” said Town of Cary Festivals Coordinator Joy Ennis, who recalled the August 13th weather-related collapse at the Indiana State Fair that killed seven an injured 40 people.  “For over three decades, we’ve built a reputation for  providing one of the most wonderful festival experiences in the nation, and with our not being able to meet that standard this year, we’re really left with no other choice but to wait until Lazy Daze 2012.”

Ennis pointed out that, for several reasons, the festival could not be postponed to Sunday or moved to another date entirely.  “First, we set up the festival one day before, so with the Hurricane’s effects being here on Saturday, there would be no way to prepare for a Sunday festival.  And, if we do sustain damage in Cary, we’ll know that on Sunday, and our first priority will have to be to help our community recover from the storm.  As for picking another day later this fall, most of our artists, venders, and entertainers are already committed to other events, so we wouldn’t be able to get them here on what for them would be such late notice.”

Lots of disappointment abounds from artists who plan to show, organizations that have booths planned and volunteers who were eager to lend a hand. We will all have to wait until next year- or at least until Spring Daze, held in April.