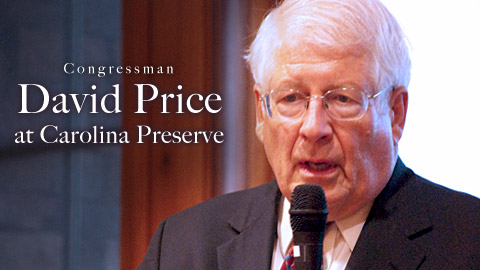 An Introduction to David Price

David Price represents the North Carolina 4th District, a compact constituency (for now – more on that later) around Research Triangle Park including Cary, Durham and Chapel Hill. He has been serving in Congress since 1987.

Congressman Price has an easy-going, plain-spoken and relaxed manner that belies his two undergraduate degrees (one from UNC Chapel Hill and the other from Yale), his doctorate in political science (Yale again) and his previous career as a Professor of Political Science and Public Policy (Duke). 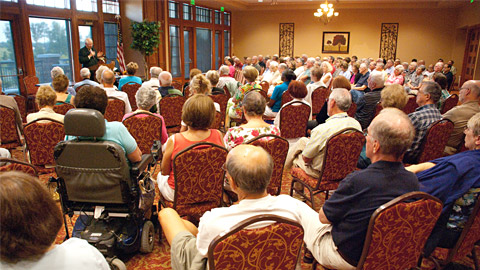 About 200 people filled the spacious meeting room at Carolina Preserve. The Preserve is a 55+ community, so most of the heads in the audience were sporting gray hair.

Before taking questions previously submitted by the audience, Price gave a brief introduction. His main message: the last few months in Congress have not been good.

“I have never believed in government by brinksmanship, which is what we’ve had this year,” Price said.

He categorized the most recent term in Congress as “challenging times, contentious times”.

“Surely there are some things we can all agree on, take a vote and move on,” Congressman Price told the audience. “I’m hoping for a better fall.”

Question: What Is Your Policy to Get the Economy Going?

After the introduction, Ms. Bader (pictured below) read out the first question. The questions had been gathered over the past weeks from community members and curated by a non-partisan group, according to the introductory statement. 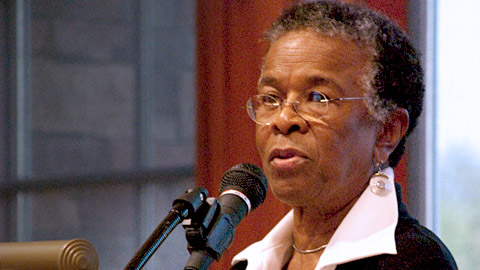 The first question was about the economy. In this, Carolina Preserve probably mirrors just about every other community in America.

“Well, if I had a silver bullet plan for the economy, you’d have heard it by now,” Price quipped to the audience.

Congressman Price reiterated his long held position that infrastructure projects like roads and bridges are a key ingredient in the prescription for our ailing economy.

Congressman Price pointed to his bi-partisan co-sponsorship of a bill with Rep. Howard Coble (R-NC, 6th) supporting innovation in high-tech textiles for export. “The textile business in North Carolina has been pronounced dead and gone,” Price said, “but exciting things are going on at NC State – fabrics that stop bullets and fabrics that can withstand 2,000 degrees of heat.”

Price noted that high tech textiles are not the kind of thing that gets out-sourced to a developing country.

The Congressman also called for better trade agreements that take into account minimum working conditions, “so we’re not taken for suckers.”

The next question from Ms. Bader was about tax policy and social security. You could hear a pin drop in the room.

Price didn’t dance around the questions for his 55+ audience. “Tax policy is askew in the country,” he told the audience flat-out. He said the United States could raise $1 trillion by letting the Bush-era tax cuts expire.

On Social Security, Price said not to panic. He said that Social Security was in deep crisis back in 1983, but in an example of  bi-partisanship, an agreement between Speaker of the House Tip O’Neill and President Ronald Reagan straightened out the mess. “Social Security has run a surplus since Reagan… it has not added a dime to the deficit.”

How does a politician answer a question about term limits? Here’s what David Price said: “I’m not a supporter of term limits.”

He said the House of Representatives needed a mix of “experience and new blood.” He asked the audience to name one organization that would fire its senior workforce every few years. Price noted, “The voters can kick us out every two years.”

With a laugh, Price quipped, “There are some members I can think of for whom one term may be too many.” Laughs from the audience.

The next question addressed Congressional redistricting in North Carolina. This is a process undertaken by the State legislature to decide who votes in what district.

Price had his most heated remarks of the evening, calling the new voting map “a gratuitous job of smashing this district”, meaning the 4th. Price pointed out that the formerly compact 4th district (shaped more or less like a rectangle) now looked like “Vietnam,” stretching from Greensboro to Fayetteville.

He said that Durham would be divided up into four separate voting districts and that 50% of African-American voters would be in just three Congressional Districts (the state has 13 districts in total).

“It’s one heck of a gerrymandering job,” Price said with a shake of his head. He said he plans to run again to defend his seat, whatever the shape of his district. 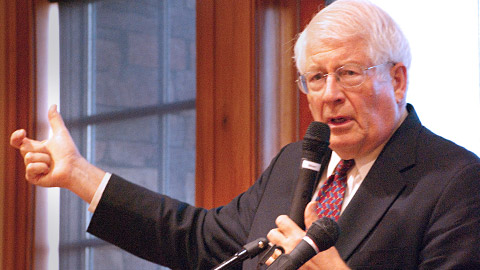 Congressman Price had plenty to say about partisanship in Congress, but he didn’t shy away from saying it was a reflection of the national mood. “It’s not just the way Congress behaves, it’s the way everyone behaves.” Price added, “some politicians have thrown gas on the fire.”

On bi-partisanship, Price had his best lines of the night:

“Congress needs a bi-partisan capacity, especially when tough decisions need to be made.”

“It isn’t totally polarized, no matter what you see on TV,” Price said. “But we have to find our way back to a better bi-partisan arrangement.”

“Politics may be messy, but it’s an essential ingredient of democracy and a civil society.”

“A good argument in the Legislature is better than a fight in the street. That’s what they have in some other countries.” – Congressman David Price

Ms. Bader saved the juiciest question for last. Submitted by one of the members, it read “How do you feel about drug testing for seniors and how will it affect the fiscal crisis?”

Congressman Price’s mouth fell open just a little, but no sound came out. His eyes drifted off to the ceiling, perhaps looking for an answer. Nervous laughter flickered across the room.

The Pricean focus returned. “Never heard that one before,” he admitted. He straightened up a bit. “I’m not in favor of drug testing for seniors,” he declared seriously, “and I’m not sure what it has to do with the fiscal crisis.”

Ms. Bader thanked the Congressman for visiting Cary and room responded with warm applause. Mr. Price took off his jacket and stuck around for about half an hour, shaking hands and chatting with anyone who wanted to say hi. 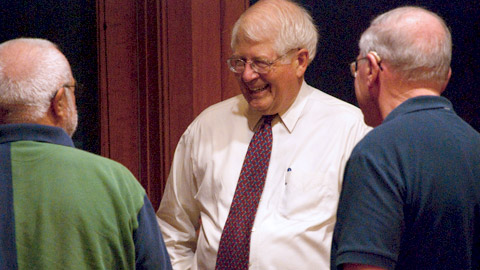