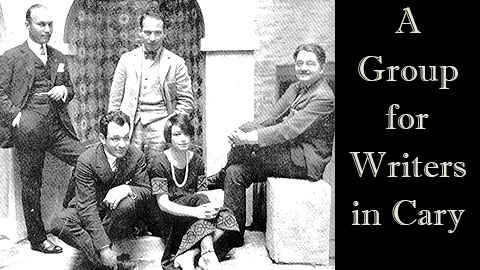 Cary, NC – I’ve reviewed a lot of books written by local authors for CaryCitizen, and I’ve received many article submissions from Cary residents. It is very clear there is literary talent around these parts.

Earnest Hemmingway said, “Writing is a lonely occupation.” So – if you are hunched over a laptop, power-drinking coffee, your skin yearning for the the sun – get out of your house every once in a while!

The group is meets on the final Wednesday of each a month (except November and December) in Chambers’ gallery in Ashworth Village, 200 South Academy Street, in Cary from 7 to 8:30 p.m.

Lynda Chambers will moderate the meetings.  “We can evolve however the group decides,” she noted. “There’s no membership fee and the gallery provides refreshments. So whatever your genre, if you’re a writer, come and be inspired and supported by writers of all levels.”

The next meeting is September 28, 2011. Hob-nob and mingle there at 7 p.m. and jar loose that writer’s block. For info contact Lynda at lyndachambersart@yahoo.com.