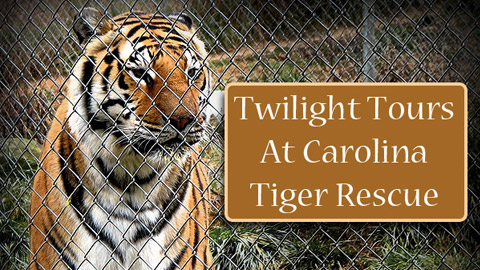 Story by Julie Roland. Her Route 64 Journal in Pittsboro is part of the CaryCitizen publishing network. Photo by MacKensie Cornelius.

Pittsboro, NC -A short drive from Cary is the lovely town of Pittsboro, home to many artists, family farms, fabulous restaurants and personable shops. It’s also home to many tigers, lions and other wild big cats. Carolina Tiger Rescue houses over 25 large exotic cats that have been rescued from private owners. You can take a tour, and it’s just 20 minutes from Cary down Route 64.

The Humane Society estimates there are 5,000 – 7,000 tigers in private ownership in the United States. Sadly, in contrast, there is approximately 3,200 tigers that remain in the wild.

Available seasonally (April-October) on Saturday evenings, you are invited on a special walk to see some of the most spectacular cats on the planet. Beginning at sunset, you will see these exotic predators during the most active part of their day.

Your tour will take you on guided half-mile walk outdoors on grass and gravel to meet some of the world’s most endangered species. Your guide will personally introduce you to tigers, lions, caracals, servals, ocelots, binturongs, and kinkajous, explaining the rescue stories that brought them to Carolina Tiger Rescue and the issues that their kind face in the wild.

The tour lasts approximately 1 1/2 – 2 hours, depending on the group’s involvement.

The Laws Regarding Wildcat Ownership

There are 2 primary federal laws pertaining to the ownership of wildcats, the Captive Wildlife Safety Act and the Animal Welfare Act.

Find Out How You Can Help

More than 13,000 people visit Carolina Tiger Rescue each year, learning about the issues affecting wildcats through guided tours and field trips. Research projects at Carolina Tiger Rescue are assisting conservation efforts in the wild and providing valuable information to colleges around the country about the rainforest habitat and about species represented at this facility.

Carolina Tiger Rescue provides internships for students from around the country, and provides community service opportunities to the local community. Find out how you can help by visiting CarolinaTigerRescue.org.