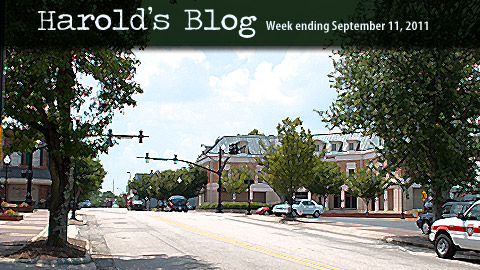 From the blog of Cary Mayor Harold Weinbrecht, covering the week through September 11, 2011. In compliance with North Carolina election law, CaryCitizen has edited Harold’s Blog this week if necessary to omit any campaign-related references. You can read Harold’s Blog in its complete form at http://haroldweinbrecht.com. Photo by Hal Goodtree.

September 11, 2011, Cary, NC – Today is a day of solemn remembrance. As I write this journal I remember the nearly 3,000 people that lost their lives ten years ago and the thousands of others whose lives were drastically impacted. If you are religious, I would invite you to join me in prayer on this day.

This week kept me busy as mayor with the Chamber Banquet, a work session, a council meeting, a forum, and the 911 ceremony.

Monday was a holiday and I spent it working except for the evening when I had dinner with my aunt Fellas Bond and my cousin Lisa. Fellas Bond was my mother’s sister and wife of former mayor Fred Bond. We had a great time and good food celebrating her birthday. I was able to hear stories about my uncle (and others) which I find fascinating.

Tuesday I called council members in preparation for Thursday’s regularly scheduled council meeting. I was able to contact all council members except Robinson. The only issue seemed to be whether or not to table a request to downzone a property from commercial to very low density residential. The owner of the parcel wants to downzone his property because he is not interested in ever developing it as commercial. This presents a problem for his neighbors who want commercial because they will have to provide more buffers. It was everyone’s hope that the parties involved could work out a compromise but that hasn’t happened to date. At the agenda meeting with staff we discussed this and potential ways to move forward.

After the agenda meeting I met with the town manager and other staff members to discuss a letter received by the U.S. General Services Administration regarding a new location for an ICE facility. This is their follow up since they withdrew the proposal next to West Park. Now their search area includes Cary, Morrisville, Fuquay Varina, and Raleigh. They wanted to know if we would like to recommend a site. Here is the letter I sent in response:

Thank you for your inquiry of August 29 and the opportunity to provide feedback on your upcoming solicitation for office space for the Department of Homeland Security Immigration and Customs Enforcement (DHS/ICE).

Due to the nature of this type of facility, we would strongly urge GSA to limit its search to areas that are significantly separated from residentially used or zoned properties. We also discourage you from locating this facility in or near areas used for shopping centers and/or within the General Commercial zoning district. While we do not have specific suggestions on places where the facility should be located, we would be happy to provide detailed information about any Cary sites once the GSA has its short list. Since much of the area you are considering is within other jurisdictions, we recommend you make a similar contact with representatives from other localities to obtain their feedback, if you haven’t already done so.

We are also available to facilitate communications between your agency and any Cary landowners, developers and residents.

Incidentally, we are currently working on zoning ordinance amendments that will clarify the zoning districts where various types of government uses may be located. Hopefully, this will also be helpful as we move forward.

Lana Hygh, Assistant to the Town Manager, will be coordinating this issue for us. She may be contacted at 919 469-4006 or lana.hygh@townofcary.org.

Again, thank you for the opportunity to provide feedback and please let us know if we can be of further assistance.

Corner of Davis and High House

In other discussions with the town manager we talked about a new proposal from the Davis Drive and High House intersection. The corner that was approved for Crosland is now ready to submit a revision (which I have not seen).

What is interesting is that their project approval, which was extended by the legislature, is approaching expiration by 2013.

Following the meeting with the town manager I dropped in on the Environmental Advisory Board to say goodbye to outgoing members. The two outgoing members have been on the board since it was created in 2008. We are so blessed to have such talented individuals willing to serve their town.

Wednesday I attended the 2011 Cary Chamber of Commerce Annual Banquet. The featured speaker was Tom Ross, President of the University of North Carolina System. He spoke on the importance of education and why we should be careful to make sure our standards don’t slip in the university system during this recession. After his address awards were presented including the Business of the Year which I had the pleasure to introduce. This year’s recipient of the Business of the year was Lord Corporation. I presented the award the President/CEO Rick McNeel.

Thursday the council met to discuss topics for the annual retreat in January. Since the council will have at least one new team member it was agreed that a team building session would be in order. To me this is extremely important. The reason this council has been so successful is that we can work as a team even though we may have drastically different philosophies. Other topics agreed on included our service philosophy, options for infill such as vacant shopping centers, and how to be more effective with the legislature.

Our regularly scheduled council meeting lasted only about an hour. We had annual presentations from some of our advisory boards. The main issue for the night was, as predicted, the land use amendment which will begin the process to downzone a property from commercial to low density. It was pointed out during the discussion that this was a vote on the land use and that compromises proposed were really zoning. So after a motion to table failed the council unanimously approved to change the land use to very low density.

Friday morning I participated in the Advocates for Health Forum in Raleigh. Though the forum was supposed to focus on Health issues we also answered questions on school reassignment and other topics. In my introduction to health I explained that I committed myself to physical fitness over 30 years ago. I talked about how a dedication of starting every morning with 200 crunches, weight lifting, and over an hour of cardio later in the day has allowed me to have a resting heart rate of 47 with a blood pressure of 106 over 60. My point was, no matter how business your schedule may be there is always time to be physically active IF you are committed.

Saturday I attended the Western Wake Farmers Market Pig Picking. I walked around and talked to the crowd and vendors for about an hour and a half. There is a great deal of interest in having a permanent farmers market near the current site. The staff is looking at ways to make this happen and will report to council soon.

Sunday I gave welcoming comments at the 911 ceremony at Sertoma Amphitheater in Bond Park. Unlike the other solemn ceremonies throughout the country and world, this was more a celebration of global understanding and world peace. Here are my comments:

Good afternoon and thank you for inviting me to be here with you again this year as we pay tribute to the spirit of hope, heroism and unity that have come to represent September 11 in our country. It is my pleasure to greet you on behalf of the more than 140,000 people who call Cary home and the entire Cary Town Council (acknowledge members of Town Council present).

This year marks the 10th anniversary of the tragic events that occurred on September 11, 2001 when thousands of lives were lost from the terrorist attacks on the World Trade Center and Pentagon. They were citizens like you and me — people who got up that morning and went to work with the intention of performing a service for someone else, be it their clients, customers, or colleagues. They were fathers and mothers, sons and daughters, sisters and brothers who undoubtedly served their families at home. They were friends and neighbors who worked in and served their local communities.

And so today, as we remember the tragedy of that day, we honor their memory through our own service – both individual good deeds and our collective service to our community. I encourage you all to mark September 11 by taking a moment to sign up to volunteer or by giving back in some way. I can tell you that there are numerous, ongoing volunteer opportunities available, including the Town’s own Spruce beautification program. I’ll be at the Fall Litter Sweep on October 1st if anyone wants to join me.

I also want to encourage everyone to keep coming together as we have this afternoon to promote global understanding and world peace. Today Cary joins Sister Cities International in bringing people together for more than 200 concerts worldwide in the name of peace and understanding. I am delighted to see each of Cary’s own Sister Cities represented here today.

Now please take a moment to pause with me before this evening’s entertainment in a brief moment of silence to remember those lost and injured on 9-11 and to pay tribute to the first responders and military personnel who continue to serve to this day.

Information from staff this week included notification that the little league team the council sponsored is called the Cary Town Councilors. Interestingly, they will be playing a team sponsored by Don Frantz on October 8th. Council member Adcock and I are taking up council member Frantz on a friendly wager for the beverage of our choice.

The big announcement from staff this week was about another purchase downtown; the purchase of the historic Jones-Foy House at 324 S. Academy Street. Adjacent to the Cary Arts Center, the Town of Cary intends to partner with a private firm to renovate and lease the currently vacant property in order to meet the needs of a growing downtown center. The property, originally constructed in 1896, is listed as a contributing building to the Cary Historic District on the National Registry of Historic Places and was acquired for $601,500; the purchase is being paid for as part of the $8 million allocated for downtown capital projects in the Fiscal Year 2012 budget.

Emails and Next Week

Next week is jammed packed with interviews, forums, a work session, tours, and events. It will start bright and early on Monday with a group of second graders. THAT should be interesting.

Well that is all for this week. My next post will be on Sunday, September 19th. Please feel free to email me with a comment. Email all Town of Cary questions or comments to Harold.Weinbrecht@townofcary.org. Email personal comments to augustanat@mindspring.com.

Panther’s Beat: The “New” Panthers Have a Cam-ing Out Par...