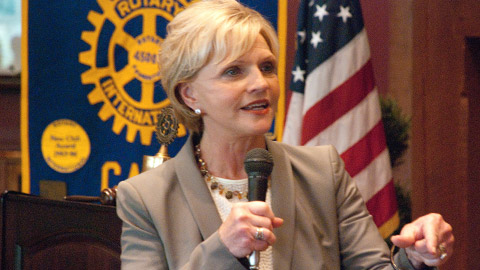 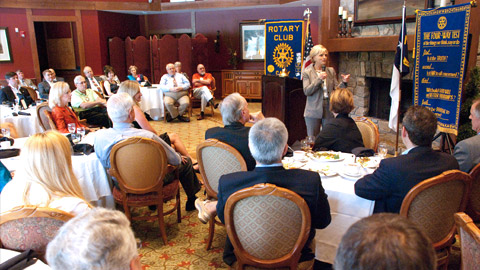 It was a casual and friendly gathering of about 100 Rotarians. There are 34,000 Rotary clubs worldwide, volunteering in communities at home and abroad to support education and job training, provide clean water, combat hunger, improve health and sanitation, and eradicate polio.

The Governor arrived at 12:15 and worked her way around the room, shaking hands and saying hello to everyone personally. 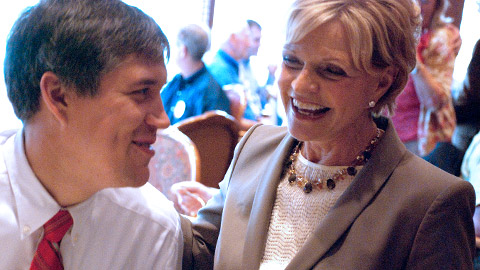 The crowd settled down to lunch. It was a normal Rotary meeting, except for the presence of the Governor of North Carolina. In honor of the Governor, a group of Boy Scouts presented the colors. I spotted them stressing out a little beforehand. 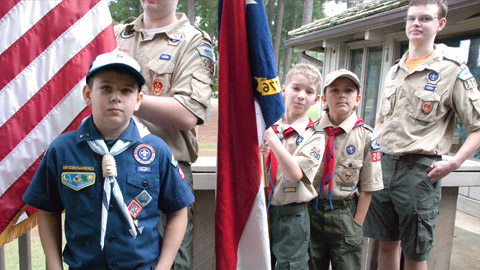 The audience said the pledge of allegiance and sang God Bless America. Plates were cleared and members made a few announcements. The Cary club has an upcoming golf tournament and is planning a cleanup on Black Creek Greenway.

Governor Perdue began with a few remarks about her Cary connection, mentioning her son and daughter-in-law who live in town.

She also talked about her great respect for Cary, highlighting a community where more than 60% are college grads and 20% have advanced degrees. “It’s the quality of the workforce that attracts companies to Cary,” Governor Perdue said.

The Governor then turned to the economic condition of the state. She talked about painful cuts to bring the state budget under control, but reminded the crowd that North Carolina is “one of six states with a Triple A bond rating.”

Governor Perdue brought the first two topics (Cary’s educated population and the economy) together with a third: statewide cuts to education budgets.

The Governor described how economic success is contingent upon “a pipeline of educated workers.”

“My parents didn’t go to high school,” Governor Perdue said, “and look at me – I’m the Governor of the greatest state in the union.”

She talked about the need for continuing advanced research at the state’s leading universities (concentrated heavily in the Triangle) as well as expansion of the Community College system, training mid-level workers for the current needs of the job market.

Governor Perdue, herself a Rotarian, paid close attention to the clock. The Cary Rotary Club meetings end promptly at 1:30.

She took questions from the audience about the economy, taxes, the UNC budget and her “toolbox” to attract large businesses to North Carolina.

This last question provoked a detailed response from the Governor. Missing from her toolbox of incentives, she explained, is a fund of upfront money that states can give companies for relocation. North Carolina has no such mechanism. South Carolina and Louisiana do.

“I’ve brought this up at the Governor’s conference,” Perdue said, “I think all the  governors should take a pledge to disarm.”

This is a recurring theme in the Governor’s message. I’ve heard her use the words “pledge to disarm” on other occasions at SAS and the Governor’s Mansion.

Governor Perdue fielded a couple of other questions, musing about a state venture capital fund and commenting briefly on redistricting.

The meeting came to an end. The Cary Rotary Club presented the Governor with some gifts including a small Cary Rotary Club flag and some cards featuring the illustrations of Cary artist and Rotary Cub member Jerry Miller. 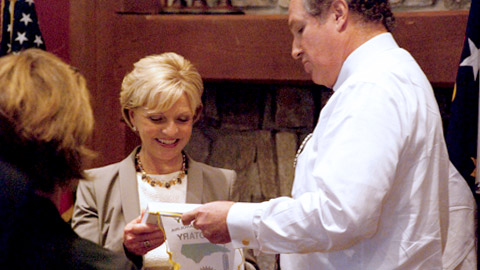 The Governor, who had greeted Jerry warmly when she worked her way around the room, told how she had bought a large print by Jerry Miller when she was first elected to public office in the state capital, what a talented artist and fine fellow he is…

“Tell them,” said Jerry, indicating his fellow Cary Rotarians, “they don’t know it!”

Editor’s Note: The News & Observer covered the same event, but chose to focus on an off-hand comment by the Governor about suspending elections for two years so representatives wouldn’t be so concerned about their jobs.  It was, as the Governor’s office later said, hyperbole –  that is, an exaggeration. She was talking about the pernicious effects of government gridlock and partisanship. One suspects the N&O attends these events specifically to hunt for a “gotcha” moment.