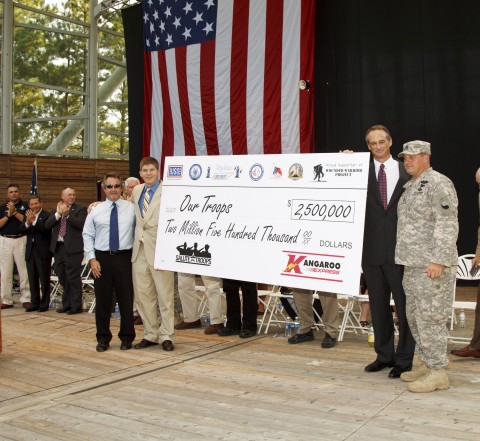 CaryCitizen reported in early July when the Salute Our Troops campaign’s restored Jeep made a pitstop in Morrisville. At that time the group had raised about $1.35 million.

Highlights from the campaign:

Half of the donations will support the USO, making Salute Our Troops one of the largest donations to the USO in a single fundraising campaign during its 70 years of delivering programs, entertainment and other services to the military. The remaining donations support Wounded Warrior Project, honoring and empowering injured servicemen and women, and five state-based military support organizations.

“Kangaroo Express guests and associates answered the call this summer, in a resounding testament to the pride and gratitude of Americans, to show support for our Armed Forces and their families,” said John Fisher, senior vice president of The Pantry. “This overwhelming donation is a great demonstration to what Americans can achieve when working together on one common goal. “

From Memorial Day to Labor Day, Kangaroo Express, along with Salute Our Troops presenting sponsor PepsiCo, invited store guests to make $1 donations toward its $1 million goal. That goal was achieved in just the first five weeks of the campaign on Independence Day weekend.

As part of the campaign, the USO Salute Our Troops Jeep Tour traveled more than 13,500 miles throughout eight states, honoring local military heroes and families in more than 75 local communities along the route.