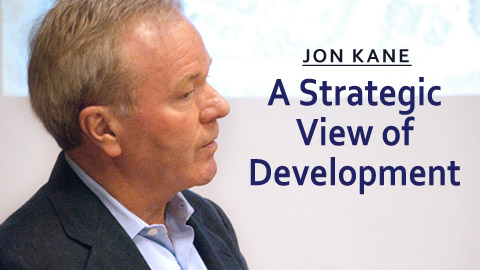 Cary, NC – The Heart of Cary meeting on Thursday morning was literally standing room only for a presentation by Jon Kane, the developer of North Hills.

A Who’s Who and Some Fine Baked Goods

Close to 50 downtown business owners, residents and public officials packed the Cary Chamber for the 8 o’clock meeting. It was a who’s who of downtown leadership including Ed Gawf, Ralph and Daphne Ashworth, Scott Ashworth, Sheila and Carroll Ogle, Don and Lisa Frantz, Howard Johnson and Sandy Jordan of the Chamber, Captain Don Hamilton of the Police, property owners Bill Taylor and Curtis Westbrook and many other civic and business leaders.

After some HoCA business, Doc Thorne turned the floor over to Jon Kane.

In a nutshell, Mr. Kane started with a small property that held a single drug store and turned it into one of the signature developments in the Triangle – North Hills.

In less than a dozen years, Kane Realty Corporation has expanded the project to over 100 acres of mixed use retail, residential, entertainment and office.

Mr. Kane talked about North Hills, but the audience didn’t have much trouble picturing the parallels to downtown Cary.

The developer began with a simple statement relating to his own project. He asked the audience to complete this sentence:

What fills in the blank? Kane Realty set out to make North Hills the answer to that question.

Ingredients of a Successful Development

As he clicked through his slides, Jon Kane ticked off a list of ingredients that make a successful redevelopment on a community scale:

At North Hills, you can go to the supermarket, lease an office, hit the gym, get a latte, see a movie, hear a band. You can shop ’til you drop, catch a meal, stay at a hotel, get a spa treatment and, maybe soon, ride your own personal pod transportation from one end of the development to the other.

Jon Kane closed by challenging members of the Heart of Cary Association to fill in their own blank:

Heart of Cary meetings are free and open to the public. For more information, visit Heart of Cary Association.