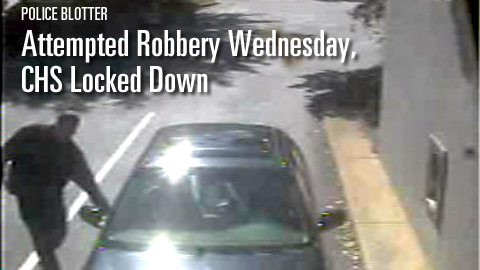 Cary, NC – Cary Police are seeking community help in the search for a robbery suspect.

About noon on Wednesday the Cary Police responded to BB&T Bank on Maynard Road, where a white male entered an occupied vehicle and demanded money.

The police state that he was “unsuccessful” and he fled the scene by foot.

The suspect is described as a white male, age 35-42, approximately 5’10-6’0, with short brown hair. He was last seen wearing a dark zippered jacket with dark pants.

Due to its proximity to the crime and to allow investigators to properly search the area, Cary High School was put on temporary lockdown for about one hour. The suspect is still at-large.

Anyone near the areas during the time of attempted robbery is encouraged to contact the Town of Cary Police Department at (919) 469-4012 or Cary Crime Stoppers at 226-CRIM(E). Crime Stoppers pays up to $2,500 for information resulting in the arrest or indictment of those responsible for committing certain types of crimes. All calls will be kept CONFIDENTIAL at caller’s request.

Editor’s Note: Cary is ranked the second safest city in the nation due, in part, to geo-policing and community safety awareness.