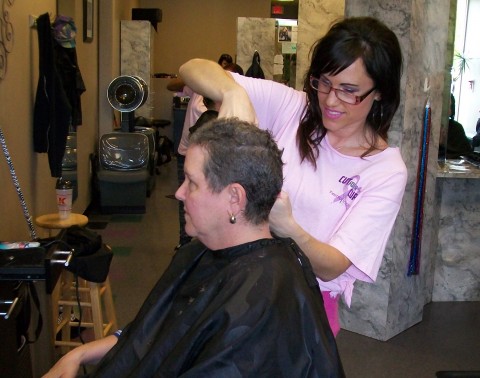 Cary, NC- Haircuts are something many cancer survivors forego during chemo and radiation treatments. Here in Cary, the Twisted Scissors Salon raised money with haircuts to benefit the Susan G Komen For The Cure.

Amanda Kimball who owns Twisted Scissors Salon in Cary, gathered her team of stylists and opened the salon doors at 10am on October 9th for a new event she dubbed “Cut for a Cure”. The salon offered $10 haircuts and $10 pink hair extensions to benefit the Susan G. Komen For the Cure: NC Triangle. The 6 hour event drew 75 people and raised more than $1100.

Among the list of 75 clients were three breast cancer survivors. Bridget McMinn, of Chapel Hill, is the most recent survivor. Earlier this year, Bridget found out she had breast cancer. She had a mastectomy in January 2011 at UNC. She had undergone 16 weeks of chemotherapy and 2 weeks of radiation. Her last radiation was on August 22, 2011.  She spent 7 months on leave from her job at the food bank. Bridget kept her head under a hat for most of the year. 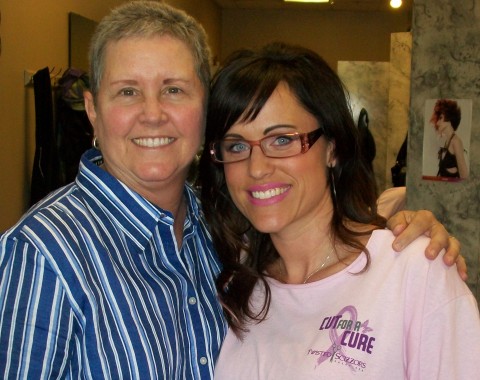 Brigette sports her new 'do with owner Amanda

Bridget took off her hat in public for the first time at the event. Bridget, a Meredith College graduate, will be meeting college friends for an informal reunion next week. Many of these women she has not seen in ten years.  It was the perfect day, the perfect time and perfect event to get the new style she had been thinking about.

It was Amanda’s husband Leroy who met and invited Bridget to the salon’s event. Bridget noticed Leroy’s Cut for a Cure t-shirt and the two got to talking. She had been waiting until the treatments were over; until her hair began to grow back in.

As Amanda began to style Bridget’s hair, Bridget’s smile began to widen. The smile grew larger as the cut & style progressed. When it was finished, Bridget was happy with her new look and her beautiful eyes shone brightly.

All proceeds go to the Susan G. Komen For the Cure: NC Triangle