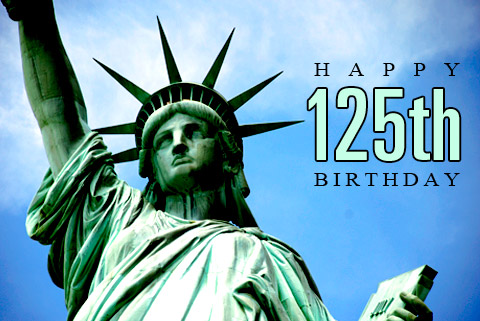 Cary, NC – Today, Friday October 28, 2011 is the 125th anniversary of the dedication of the Statue of Liberty. In addition to lots of commemorative events in New York, the National Park Service has activated a Torch-Cam, sharing views from the top with everyone in the world.

A Brief History of the Statue of Liberty

The Statue of Liberty was proposed by French political thinker Edouard de Laboulaye in 1865. It was meant to celebrate the French-American alliance during the American Revolution, but had deeper political overtones in France. In 1865, the country of Lafayette was still divided between those who favored Republican government and those who clung to the monarchy. Laboulaye hoped a big, public monument to liberty would influence public opinion on the subject within France.

Laboulaye’s timing was also important, coinciding with the end of the American Civil War. French republicans and monarchists had watched the conflict in the United States with keen interest, echoing their own considerations about the meaning of liberty, equality and justice. The assassination of Abraham Lincoln had generated great sympathy across the world. Into this stew of ideas and emotions, Laboulaye launched his idea for a statue dedicated to liberty.

It took 21 years to become a reality.

Laboulaye talked to many influential men in France about his idea. Auguste Bartholdi, an artist interested in monumental work, came onboard as the sculptor.

The National Park Service has an interesting explanation for the design of the statue:

“Liberty” was a controversial idea in the 19th century. To many people it suggested violence and revolution. Laboulaye and Bartholdi agreed that their monument should not be seen as leading an uprising, but rather as lighting the way, peacefully and lawfully. 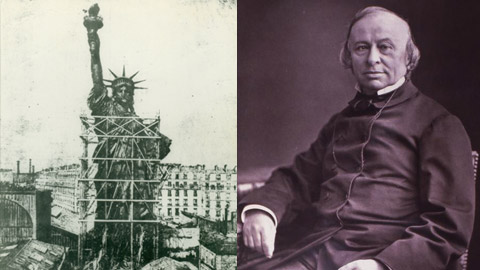 In 1871, funding was committed for the Statue by both France and America. On July 4, 1881, the Statue, which had been erected in Paris, was officially presented to the United States. In 1885, the Statue arrived in the U.S., disassembled and packed into more than 200 crates.

A financial crisis kept the Statue in boxes until publisher Joseph Pulitzer helped raise the $100,000 necessary to complete the pedestal.

The Statue of Liberty was formally dedicated in New York harbor on October 28, 1886 – exactly 125 years ago today.

Liberty in the 21st Century

Today, the Statue takes a mighty stride into the 21st century with the debut of  Torch-Cam, an entire website devoted to different live views from the Statue.

What would Bartholdi, Laboulaye and Pultizer think about the concept that anyone, anywhere can now jump on a computer and see the view from torch?

Take a look for yourself:

I imagine they would be proud, and humbled. Proud of their accomplishment and humbled by the persistence and power of the idea of liberty.

Millions have been inspired and deeply moved by the sight of the Statue – immigrants, a nation during times of war and a people grieving over an incomprehensible attack just across the water ten years ago.

Now, billions more can be inspired from any web browser in the world. That is, in countries that don’t impose censorship on the internet. Autocrats and dictators do well to fear the power of liberty.

The old girl is looking pretty good at 125.