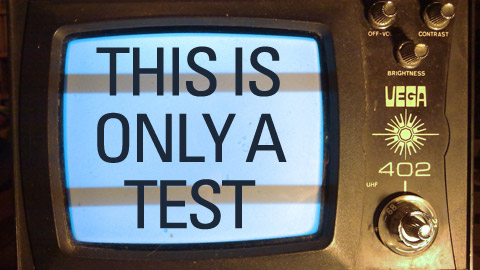 This is Only a Test

The test itself should be pretty familiar – an authoritarian male voice, a screeching tone and some bad graphics, all evocative of the Eisenhower era.

The test will last 30 seconds.

First in the Nation

Remarkably, this is the first-ever nationwide test of the Emergency Alert System.

States and localities have been using emergency alert systems for decades.

The test will be conducted by TV stations, cable providers and radio broadcasters. Why not the Pony Express and the Town Crier, I wonder?

The notion is that during an emergency, it is hard to predict what infrastructure will be available. Maybe the internet will be down. Maybe the electrical grid. That’s why it’s called an emergency.

The Federal government has asked media outlets to remind people that Wednesday’s test is not an actual emergency. Don’t call 911.

Let us know if you hear the test message on Wednesday. I’ll likely be sitting at my computer at 2 pm, not watching TV or listening to the radio. It will be interesting to see if the test actually reaches a majority of citizens.